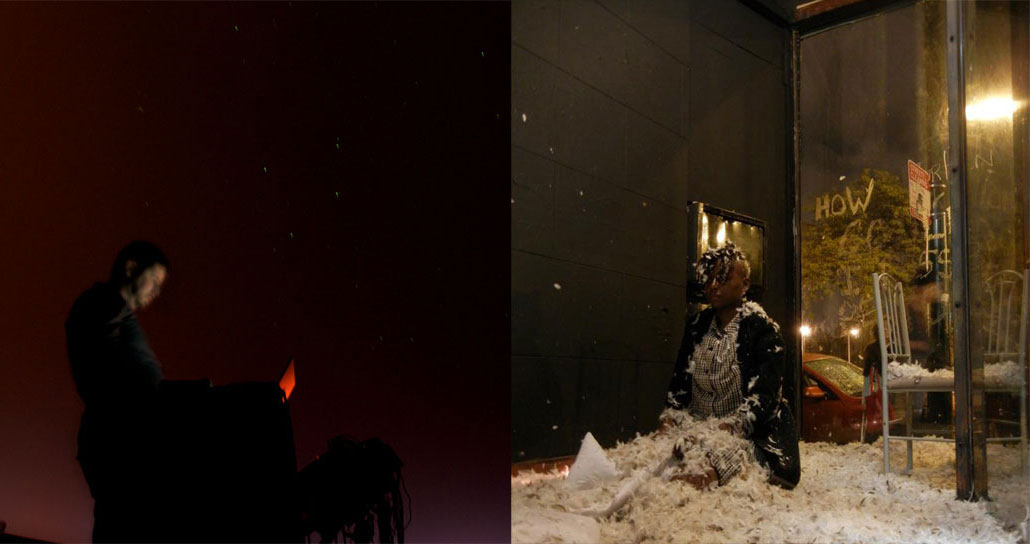 LACE presents A Composite Field, a new work by Yann Novak and Taisha Paggett  at the MAK Center for Art and Architecture’s Mackey Garage Top (at the R. M. Schindler designed Pearl M. Mackey Apartments) in the Mid-Wilshire area of Los Angeles (1137 South Cochran Avenue). For the eighth and final installment of his one-year program, Performance Art Curator in Residence Dino Dinco pairs up sound and installation artist Yann Novak with choreographer and dancer Taisha Paggett for the premiere of this site-specific work.

Dinco proposed this site to the artists out of the keen awareness of space and architecture – material, conceptual, corporeal – that informs and influences their work. Novak and Paggett take a sculptural approach to both sound and movement in their respective constructions of the spectating experience. Novak has made field recordings that document the aural presence of the Mackey Garage Top, which will inform how he and Paggett construct their performance. These recordings will be digitally altered to emphasize the unique characteristics of the space itself. Drawing on her ongoing interest in the cultural process of vision, seeing and being seen, Paggett will construct and perform a chain of actions inspired by the layered organic and artificial elements of both the space and the sound score.

Seating is limited and limited number of advanced tickets are available. There will be three scheduled seatings on the hour at 7, 8, and 9 PM.

Taisha Paggett is based in Los Angeles and Chicago and is co-founder of the dance journal project itch. Her work and collaborations for the stage, gallery and public sphere have been presented locally, nationally and internationally. These works includes individual and collaborative investigations into questions of the body, intuition, the lived experience, agency and the phenomenology of race. In addition to her group choreography and solo durational pieces, she has most recently worked collaboratively, toured with and made significant creative contributions to the projects of Meg Wolfe, Victoria Marks, David Roussève, Cid Pearlman, Cheng-Chieh Yu, Baker-Tarpaga Projects, Kelly Nipper and Rebecca Alson-Milkman. Paggett is a member of Ultra-red and maintains an ongoing collaborative project with visual artist Ashley Hunt, On movement, thought and politics, which has taken form as workshop, performance, video and mixed-media installation. She holds an MFA from UCLA’s department of World Arts and Cultures and is currently a member of the Dance Faculty of Columbia College in Chicago. More at taishapaggett.net

ABOUT THE CURATOR
Dino Dinco was raised by a family of fighting chickens in rural Pennsylvania before moving to Los Angeles as a child. He is an independent curator, filmmaker and artist. His work has been exhibited in solo exhibitions in Paris (2005, 2001), Los Angeles (2001), and San Francisco (2009, 2004), as well as in group shows in London, Paris, Antwerp, Hasselt (Belgium), Mexicali, New York and Hamburg. Selections from his photographic series Chico were featured at Salon Paris Photo at The Louvre, Paris (2001 – 2002). His work has appeared in publications such as i-D (UK), Dutch (France), Revista Espacio (Mexico), V (US), Vogue Brasil (Brazil), Tokion (Japan), BIG (US), Studio Voice (Japan), Zoo (France) and BUTT (Holland). Dinco’s award-winning short film, El Abuelo, premiered at the Tate Modern in London, May 2008 and continues to screen in festivals and online as part of Frameline Voices. In 2011, he completed his first feature length documentary film, Homeboy, which profiles gay Latino men who were in gangs. Dinco’s exhibition of photographs, installation and objects, TODOS SOMOS PUTOS (with Julio Torres) was favorably reviewed by novelist and Semiotext(e) co-editor, Chris Kraus, in the December 2010 edition of Artforum.

In addition to his year long residency at LACE as Performance Art Curator (2011 – 2012), Dinco also curated the last two annual LACE winter fundraising events, GUTTED 2010 and 2011, focusing on how multiple generations of performance artists speak from, about and to the body. More atdinodinco.com and contemporaryperformance.org/profile/DNODNCO

ABOUT THE MAK CENTER
The MAK Center for Art and Architecture is a contemporary, experimental, multi-disciplinary center that operates from architect Rudolph M. Schindler’s own House and Studio (1922) in West Hollywood. Established in 1994 as a satellite of the MAK Museum in Vienna in cooperation with the Friends of the Schindler House in West Hollywood, the MAK Center produces a year-round schedule of programming. Activities include exhibitions, lectures, concerts, film screenings, performances, publication projects, and new work commissions. The MAK Center also hosts an international residency program for visiting artists and architects.

Architect R.M. Schindler’s Pearl M. Mackey Apartments (1939) are home to the MAK Center’s Artists and Architects in Residence Program, a six-month residency offered twice annually to two artists and two architects that has operated continuously since 1995. Located on a flat lot in a residential neighborhood, the originally four-unit (since converted to five) apartment building is one of a series of residential projects built by Schindler in the 1930s. Unlike international-style architects, Schindler seldom designed identical apartment units; his apartments are as complex, individual, and innovative as his houses. The Mackey possesses characteristics typical of the architect’s work: compact apartment layout, exceptional incorporation of natural light, built-in furniture, variable ceiling heights, and private outdoor gardens or mini-balconies. Through a series of renovations, the MAK Center has intended to recreate the room layout, complex lighting, and the use of materials for surfaces and color schemes in keeping with Schindler’s original intentions.

In 2010, the MAK Center added the new Garage Top to the property. Designed by Los Angeles architects SPACE International, the Garage Top resembles a black box cantilevered above the five newly renovated ground floor garages at the rear of the lot. Clad in Wetsuit, a dark industrial material used for waterproofing, and fronted by a wall of translucent, sliding window panels, the new addition stands distinct from the original Mackey Apartments. The Garage Top interior provides a single uninterrupted space flooded with natural light. In the interest of simplicity, a soffit masks all infrastructure and service areas are discretely set at the far end of the space. Used for a variety of both MAK Center programming and MAK Center Residents’ activities, the Garage Top is designed for flexibility.