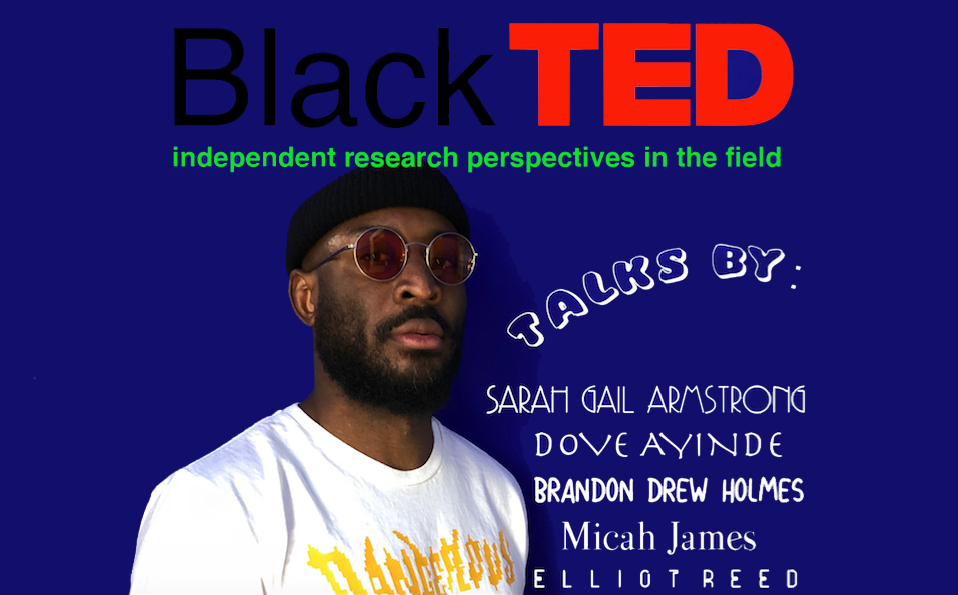 Black TED is a collaborative think tank erected in 2017 by Dove Ayinde and Sarah Gail Armstrong. Black TED focuses on Black consciousness, thought, and the exploration of such in a satirical manner in order to encourage greater accountability and action from an ever increasing apathetic and withdrawn society.

This event is in conjunction with the CAVERNOUS: Young Joon Kwak & Mutant Salon exhibition and coincides with the performances by Adee Roberson and Anna Luisa Petrisko.

“Multifaceted in every sense of the word, Sarah Gail speaks to her current state of being and desires and ambitions through her work. Be it in written form, painting, performance or an installation, we the audience are able to tell how she is coping with existing as a Black femme within a white patriarchal supremacist world. Her work is sincere in ways that most artists will never be able to create and blunt in a manner that many do not know how to create without victimizing.” – Brandon Drew Holmes
Dove Ayinde is a musician/artist in the Los Angeles,CA.
Themes of Black consciousness, social justice, and identity can be found throughout her work in zines, live performances, and in her collage art. Amongst various projects, she currently performs in post-garage band, Hausa.
Brandon Drew Holmes makes work about white people for Black people. Whether working as a writer, artist or curator BDH speaks directly upon the realities of and against white supremacy, and it’s inherently antiBlackness.
Micah James is an LA artist with enthusiasms in music, chopped up video and performance. He has presented at the Denver MCA, Wadsworth Atheneum, Echo Park Film Center and Nevada Museum of Art. He’ll be releasing several music projects in the fall, including a debut album entitled Heaven & Coin. His work deals with love (Venus), depravity and personal management. The lens is Black and queer.
Elliot Reed is an LA based performance artist. His work explores aspects of digital citizenship, sexuality, and self-hood. Teetering between epiphany and total collapse, Elliot constructs and bends narratives utilizing objects, voice, humor, and music. Shows in LA include The Hammer Museum, The LA Public Art Biennial, The Broad, Human Resources, PØST, The Box, UCLA, Commonwealth & Council, The Getty Center, and OUE Skyspace. Additional shows include VFD London, MOOI Collective Mexico City, The Gene Siskel Film Center, and venues in Paris, New York, Berlin, Tokyo, and Osaka. As of 2018 he has given artist presentations at California Institute of the Arts (CalArts), The School of The Art Institute of Chicago, Macalester College, University of Minnesota, and won the inaugural Bar-fund artist grant.
+ Google Calendar+ iCal Export