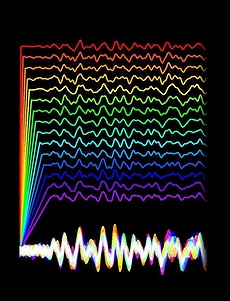 LACE is delighted to present a musical performance by Earthquake Quartet #1, comprised of USGS geophysicists Andy Michael, Stephanie Ross and Lucy Jones with a presentation by D.V. Rogers about LAMoves.

Lucy Jones, who will be performing the cello part on Viola de gamba, started her studies with a B.A. in Chinese Language and Literature which led her to study earthquake prediction efforts in China on the way to becoming a widely recognized expert on southern California earthquakes and foreshocks.  She currently leads the USGS Multi-Hazards Demonstration Project which seeks to integrate hazards science in urban areas with economic analysis and emergency response to increase community resiliency to natural disasters.

Soprano Stephanie Ross’s research has led her from the tops of the Sierra to the depths of the oceans with dives to tectonic spreading centers in submersibles such as Alvin.  Recently she has been focusing on the structure of earthquake faults along the coast south of San Francisco.

Learn more about the USGS musicians at http://earthquake.usgs.gov/learn/music/

Australian-based New Zealander D.V. Rogers is an installation-based, performance artist-engineer working between the fields of geophysiology, conceptual cultural theory, activism, performance, systems engineering, and social commentary. During 2007-2008 he was artist-in-residence at the US Geological Survey in Menlo Park, CA. Rogers refers to his work with seismology as a a conceptual intervention within geological time. Through his work, he collaborates with USGS scientists to create a linkage between earth science and art in order to broaden the reach of earthquake awareness using a contemporary cultural model.  Visit his website athttp://allshookup.org.