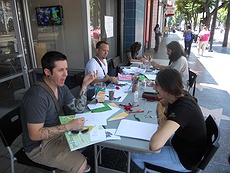 Michelle Carla Handel was born in Las Vegas, Nevada. She received her MFA in Fine Art from Claremont Graduate University in 2011. She is a sculptor whose current work investigates the body’s myriad functions and purposes by finding overlaps between flesh that is idealized, scorned, adorned and protected. Recent exhibitions have included BOOM, GLAMFA, and solo show ‘Strange Skin’ at WEEKEND space. Upcoming exhibits include a two-person show with artist Josh Atlas opening March 3rd 2012 at RAID Projects in Los Angeles. For more information visit michellecarlahandel.com

Christopher Kuhn studied at Macalester College under conceptualist Don Celender before graduating from the American University of Paris with a B.A. in Art History. He earned a Post Baccalaureate Certificate from the School of the Museum of Fine Arts Boston and was an MFA candidate in painting at the University of Tennessee, Knoxville where he was awarded a Graduate Teaching Assistantship. His work was recently featured at Autonomie in downtown Los Angeles and will be included in the upcoming group show “Seven Young Los Angeles Painters I Like” at the George Lawson Gallery in Culver City. Additionally, he has exhibited elsewhere in Los Angeles, Nashville, and Boston and been published in Arkitip and Tokion magazines. For more information visit christopherkuhn.com

Christy Roberts is an artist and activist based in Los Angeles. Her work includes performance, drawing, sculpture, video, and social practice and explores concepts that, like art, create their own culture, tension, joy, and dissonance. In 2010, Roberts founded the California Poppy Collective which explores land occupation and reclamation in California. She was most recently a guest blogger, in January, for Art21 Blog and will be performing in February at the 2012 College Art Association Conference in Los Angeles. Christy Roberts received her MFA from Claremont Graduate University in 2011. For more information visit christyrobertsart.com

ASAP (after school arts program) is an arts education collective with a faculty and student population that is always in flux. Led by Michael Ano, Elana Melissa Hill and Elizabeth Watkins, ASAP is motivated by the belief that “Arts education should be available to everyone.