You are here: Home / Apprenticeships

POSITION DESCRIPTION
LACE is seeking an Apprentice to join the LACE Team to provide support in administrative, research communications and marketing areas for the organization. This position offers the opportunity to engage in LACE exhibitions and related public programming, creating strategies and messaging for both programmatic and institutional communications. The applicant will gain a valuable introduction to artists, curators and collaborators working in contemporary art today. The Apprentice will report to the Exhibitions and Operations Manager and additionally provides support to the Communications Coordinator and the Executive Director in the daily operations of the organization, including administrative functions and ongoing program-related activities. This is a special opportunity for an applicant interested in engaging in contemporary art communications and nonprofit fundraising and administration.

RESPONSIBILITIES INCLUDE
● Participating and contributing as a Team member to further the mission of LACE
● Supporting the development of strategies for all external communications and marketing
● Coordinating website updates, email marketing, and social media
● Performing daily office procedures: digital and paper file management, data entry, organization, and maintenance
● Providing administrative support for memberships and other fundraising activities
● Assisting with research, exhibition and special event production when needed
● Assisting with other projects as assigned

TO APPLY
Send a cover letter and resume to: Juan Silverio, Exhibitions and Operations Manager at
juan@welcometolace.org. In the subject line, write “Fall 2022 Apprenticeship Application” by September 30, 2022 11:59PM PST 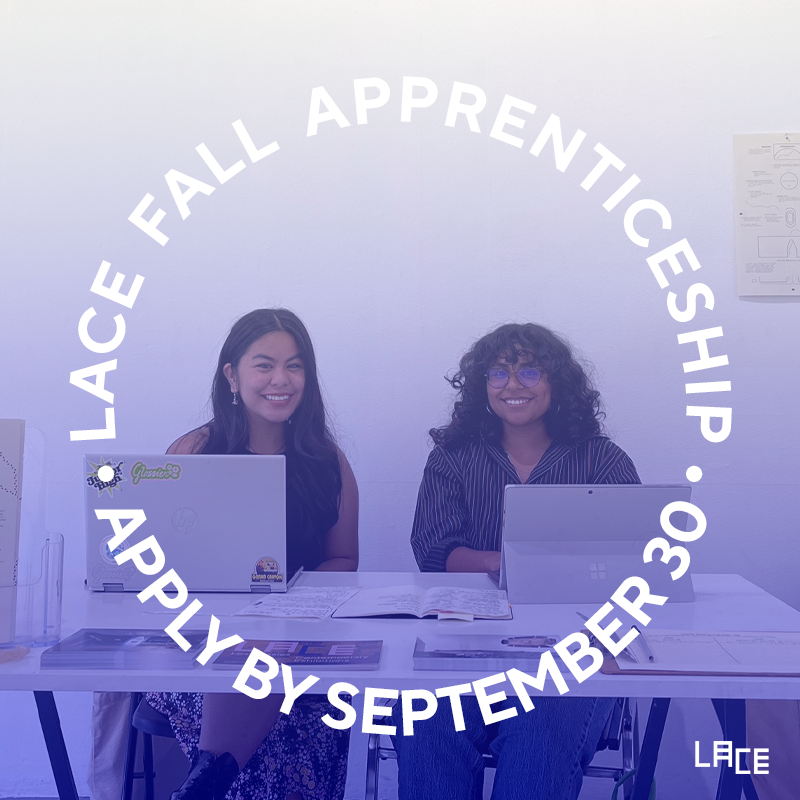 Since 1993, the Getty Marrow Undergraduate Internship program has provided substantive, full-time work opportunities to 3,200 undergraduates, exposing them to potential careers in the arts. Aiming to encourage greater diversity in the professions related to museums and the visual arts, the program funds internships at cultural organizations across Los Angeles, including at the Getty Center and the Getty Villa. The Foundation’s support enables organizations to host students in full-time, paid internships for ten weeks during the summer.

The internships are intended for outstanding students who are members of groups underrepresented in careers related to museums and the visual arts. Students gain experience in key areas such as curatorship, conservation, education, publications, and related programmatic activities. Candidates are sought from all areas of undergraduate study and are not required to have demonstrated a previous commitment to the visual arts.

Terms
The internships are full-time (40 hours/week) positions, each with a stipend of $6,400, for a consecutive ten-week work period between June and August, 2022.

Pitzer College Art Galleries is grateful to Benjamin Gosdill ’00 and Anna Burns for their generosity and shared commitment to diversity.

Former Apprentices:
LACE is supported by a network of apprentices who have helped staff, organize, and sustain the space. Are you a former LACE apprentice / intern? Not on the list? Contact info@welcometolace.org to add your name!