You are here: Home / LACE Publications 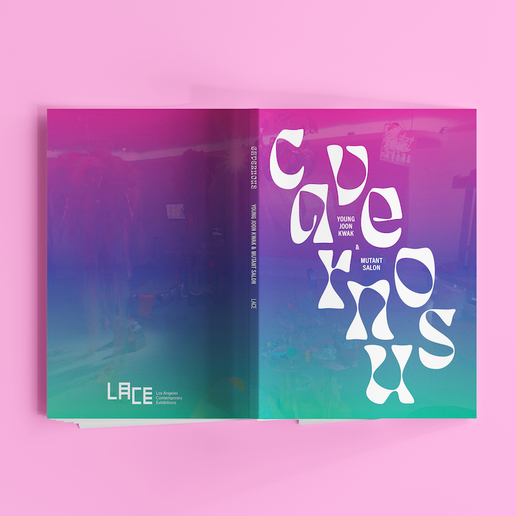 CAVERNOUS (publication) is a living queer archive led by artist Young Joon Kwak and Mutant Salon, a collective of queer-trans-femme-POC artists. CAVERNOUS shares the members’ stories navigating arts institutions as marginalized artists alongside tales of gender affirmation and more. In doing so, this project documents the fullness of queer lived experiences through the imaginative fractures in white heteropatriarchal hegemony, with all its alternative bodies and performances of existence and desire. CAVERNOUS is an ongoing critical deconstruction of how we view our bodies, and reimagines alternative forms of existence and desire through sculpture, installation, performance, wigs and more.
See more about CAVERNOUS: Young Joon Kwak and Mutant Salon here! 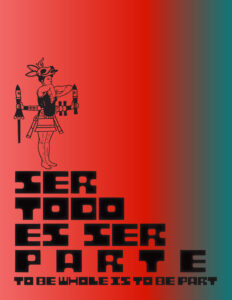 Using speculative fiction as a way to decolonize theory, this exhibition proposes a non-linear interpretation of time and place through narrative. Departing from an impetus of reclaiming this current moment and our presence in it, the title and framework of this exhibition are inspired by the concept of “the return,” not as nostalgia for an alleged better past, nor to an ancestral home, but the return as a continuous voyage of the collective self; a voyage which is cyclical, an ourboros. To have traveled and continue to travel from utopia to dystopia and back, but with a sense of evolved consciousness, that informs our present and our territories.

LACE, along with guest curator Selene Preciado, have thought deeply about what it would mean for artworks to mirror our existing life in lockup: interacting mostly digitally and/or at a safe distance. Together, we’ve embraced the challenge COVID-19 has posed to our in-person programming by seeing it as a window to virtually translate the essence of our exhibitions through rich visual documentation. 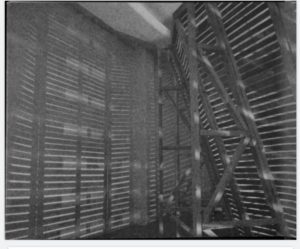 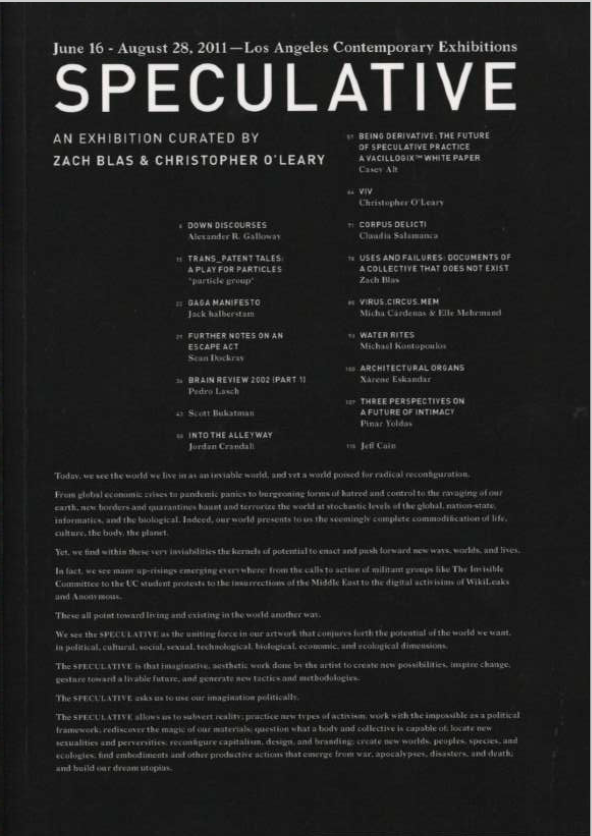 Speculative, a group exhibition curated by Christopher O’Leary and Zach Blas. Speculative will focus on new modes of art making and of presentation with an emphasis on the experiential, subversive, and tactical potentials for art in the 21st century. The projects included in this exhibition engage wildly diverse mediums from critical software, art-science, social practices, experimental video, wearable architecture, performance works and much more.

See more of Speculative from the LACE Archive. 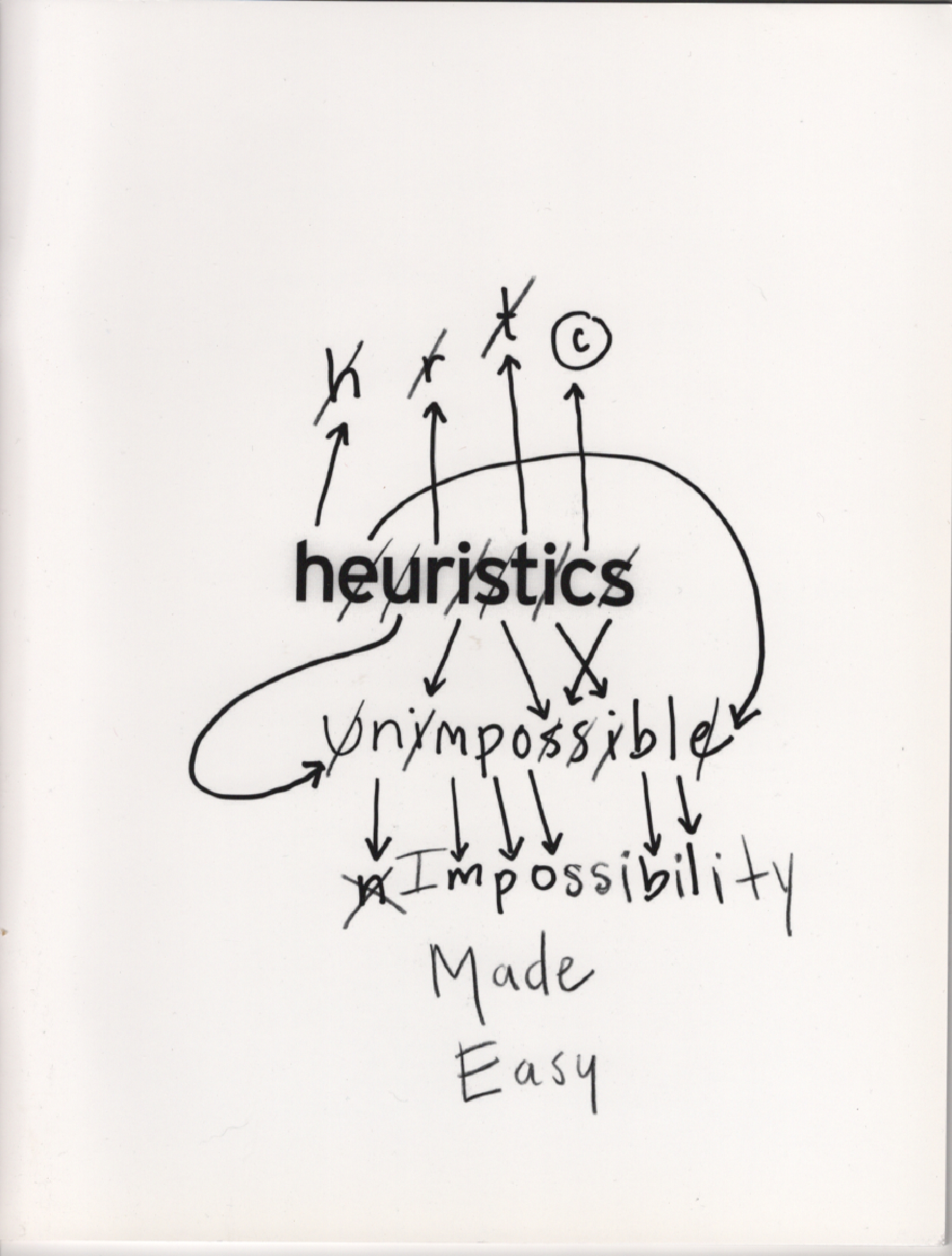 Impossibility Made Easy
June 16 - August 19, 2007
Produced by dBfoundation and LACE.

In conjuction with aporia: aporia, this publication doubles as an activity book and collection of poems, that explores the possibility of what artists would make without any restraints.

Textual extraction by Greta Byrum. Visual Adjustment by Annabel Daov. Activities designed and executed by Geoff and Sarah Seelinger (with help from Donovan.)

See more about aporia: aporia from the LACE archive. 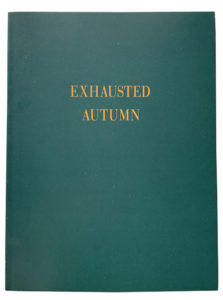 Exhausted Autumn
A Collection of Fiction, Criticism and Testimony with Plates from Paintings by Tony Greene
June 21 - August 4, 1991
Catalogue of the exhibition Sweet Oleander (LACE, 1991)

See more about "Sweet Oleander" from the LACE Archive. 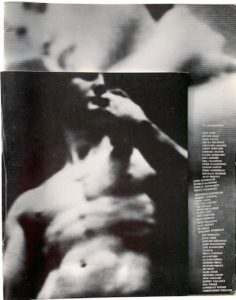 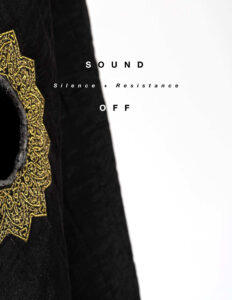 Curated by Abigail Raphael Collins, and featuring works by artists and activists who engage silence as a way to honor the inarticulable, defy demands of production, prioritize deep listening, and refuse to incriminate. Rather than negating the importance of speaking up, speaking truth to power, or raising our voices, this exhibition treats silence as a powerful tool of resistance alongside acts of speech. 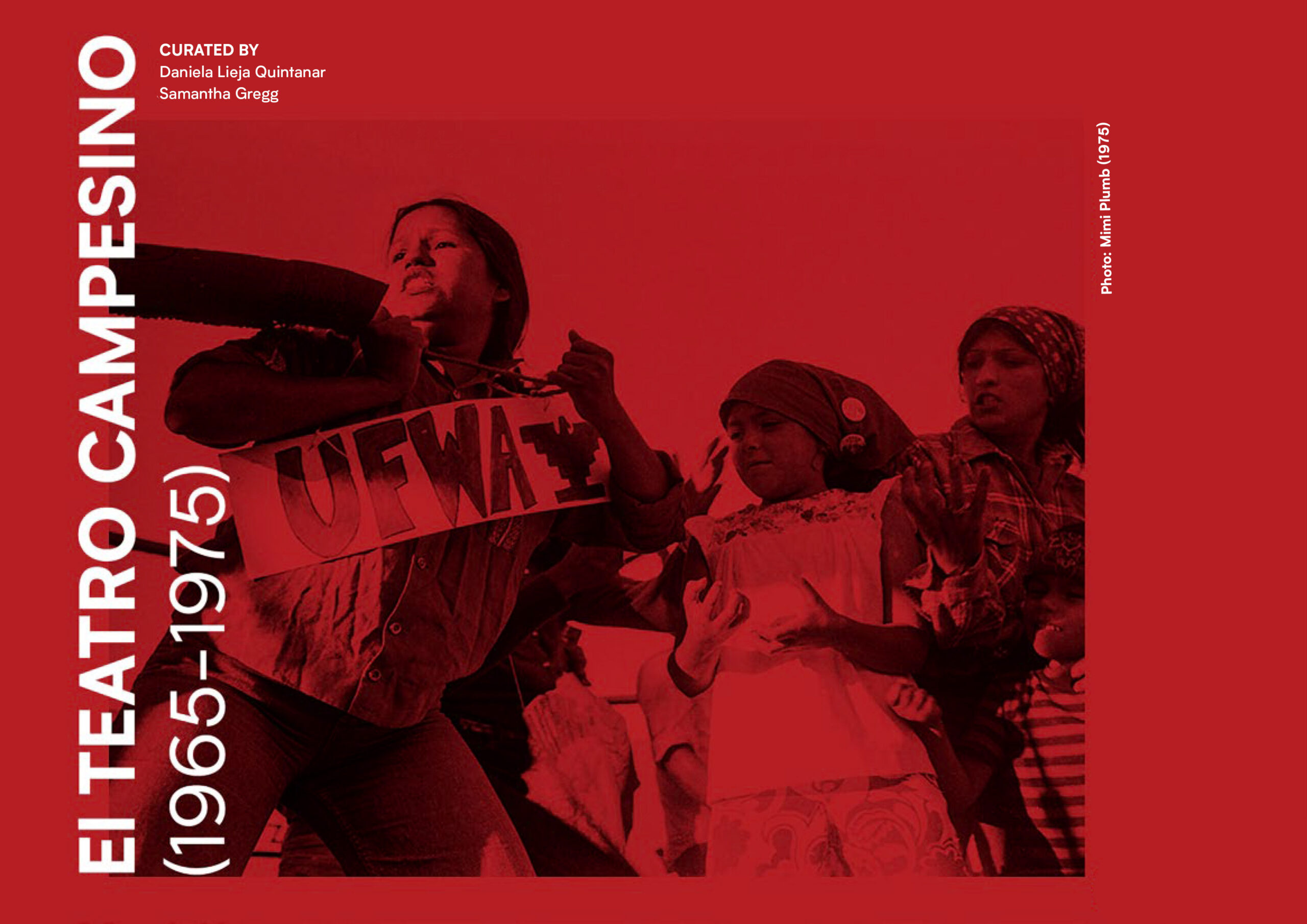 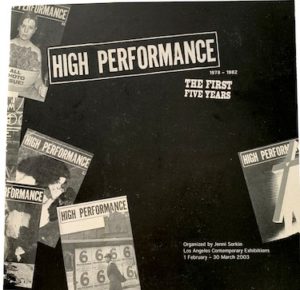 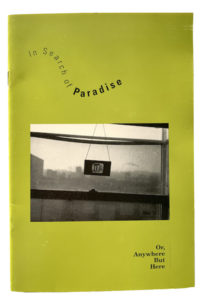 The Art of the Spectacle, introduction essay written by Jacki Apple, features 7 artists who share how their own personal experiences have shaped their art, as well as their own perceptions of the art that they create. Approaching artists in a personalized perspective, this text includes a series of questions that details the artists’ favorite aspects of pop culture and the artworld.

See more about The Art of the Spectacle from the LACE archive. 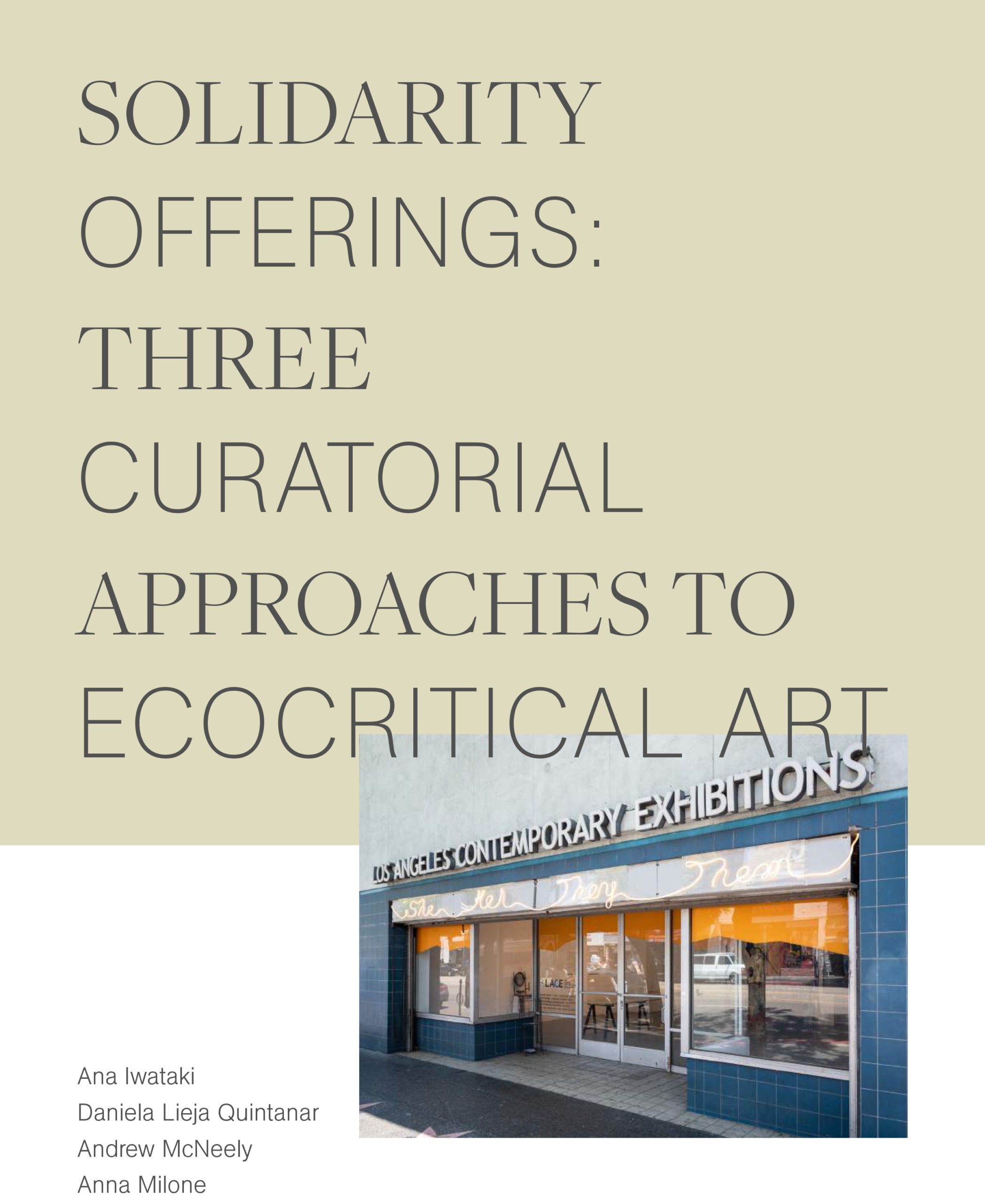 In 2019, LACE presented unraveling collective forms, A NonHuman Horizon, and Paroxysm of Sublime, three successive exhibitions that gravitated towards similar themes and considerations: new conceptions of nature and culture, resistance and oppression, finding new paradigms for our current ecological, sociological and political situation. At the invitation of FRANCE LOS ANGELES EXCHANGE (FLAX), partner of the last exhibition, the respective curators Daniela Lieja Quintanar, Andrew McNeely, and Anna Milone and Ana Iwataki explore the parallels and divergences in their approaches.

LACE is invested in artist and curator voices- Solidarity Offerings is an invitation to evoke the deep experiences we had through the works gathered in each exhibition. The publication highlights the importance of remembering as well as establishing a dialogue between curatorial perspectives to build solidarity and to reject individual work and unstoppable art production.

See more about A NonHuman Horizon.

See more about Paroxysm of Sublime. 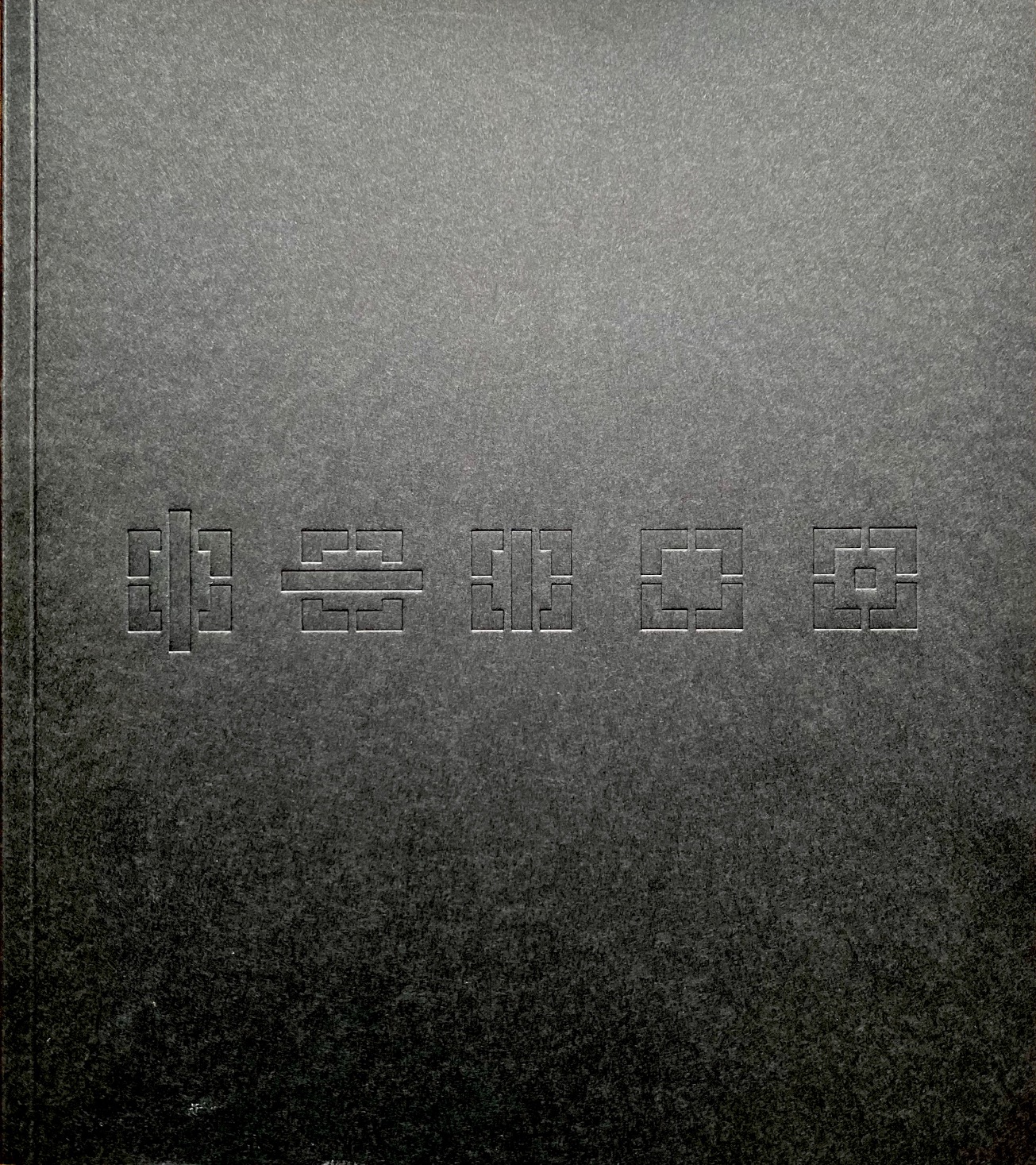 Customizing Language critically examines how language reflects geopolitical realities. The project approaches language as a tool to reflect power relations, hierarchies, social differences, and historical problems, as well as a cultural system of belonging that can indicate the loss or reconfiguration of certain kinds of identities. The participating artists engage local and historical issues by using experimental language to create a dialogue with the audience, exploring issues of “custom” as cultural tradition, U.S. Customs as an immigration agency, and lowrider customization in popular culture. 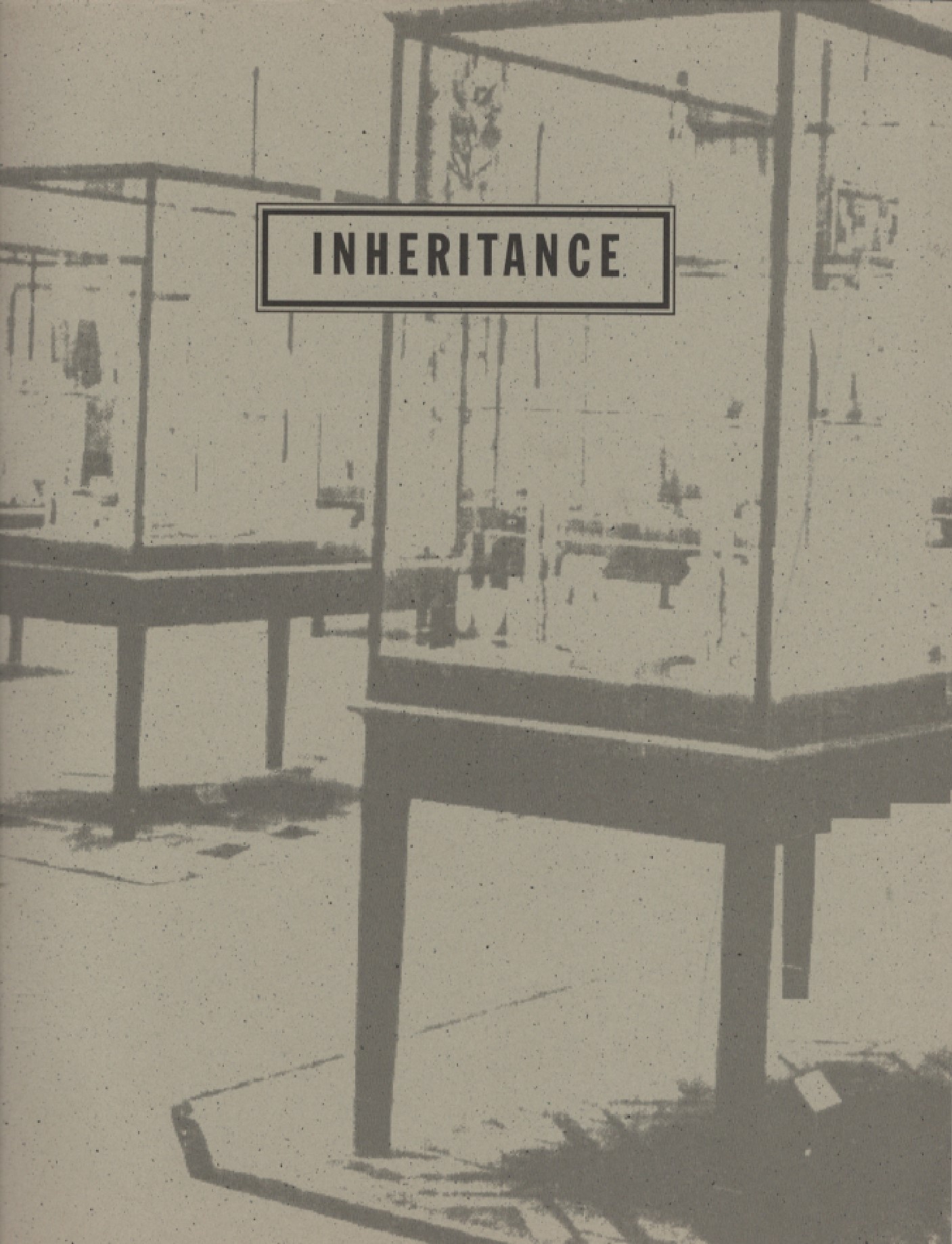 Curated by Roberto Bedoya and Jody Zellen, the show explored cultural, political and personal definitions of inheritance as it relates to representational practices. It also features essays written by Joshua Decter and Kobena Mercer.

See more about Inheritance from the LACE archives. 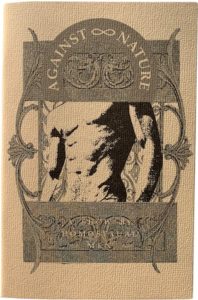 Against Nature
A Group Show of Work by Homosexual Men
January 6 – February 12, 1988
A publication from Against Nature (LACE, 1988) 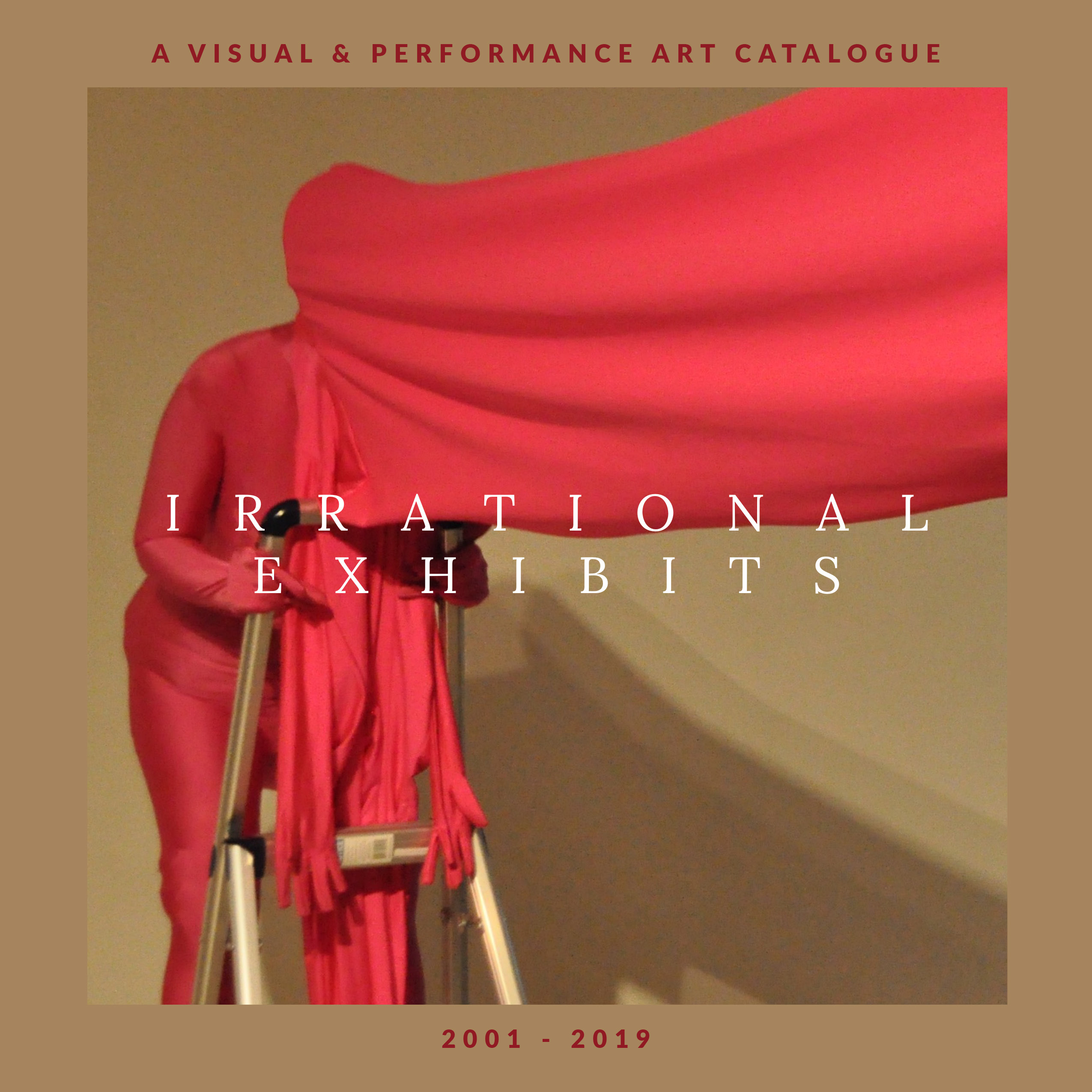 LACE and Deborah Oliver, Founder and Curator of the multi-year project Irrational Exhibits, are thrilled to present this new publication featuring an introductory essay by Jacki Apple and images from all the IE presentations from 2001 to 2019.

19 performance works took place throughout LACE’s gallery in artist-constructed installations that function as settings for their evolving actions. Composed of diverse themes and aesthetics, all the works explore a physical engagement with the body and materials in front of the audience in real time. Although the performances happen simultaneously they are not the same length, giving the audience the option to move through the spaces, circulate, browse, return, or spend immersive time at their own pace, thus creating a shared experience between viewer and maker in process. Irrational Exhibits celebrates works that embrace unpredictability, the messiness of biological and organic processes and materials, and the chaos of our times.

Click here to purchase a hardcover edition of IRRATIONAL EXHIBITS

Click here to purchase a softcover edition of IRRATIONAL EXHIBITS

Click here to read about the 2016 Irrational Exhibits 9: Reports from the Field presentation at LACE

Click here to read about the 2017 Irrational Exhibits 10th Anniversary: Mapping the Divide presentation at LACE 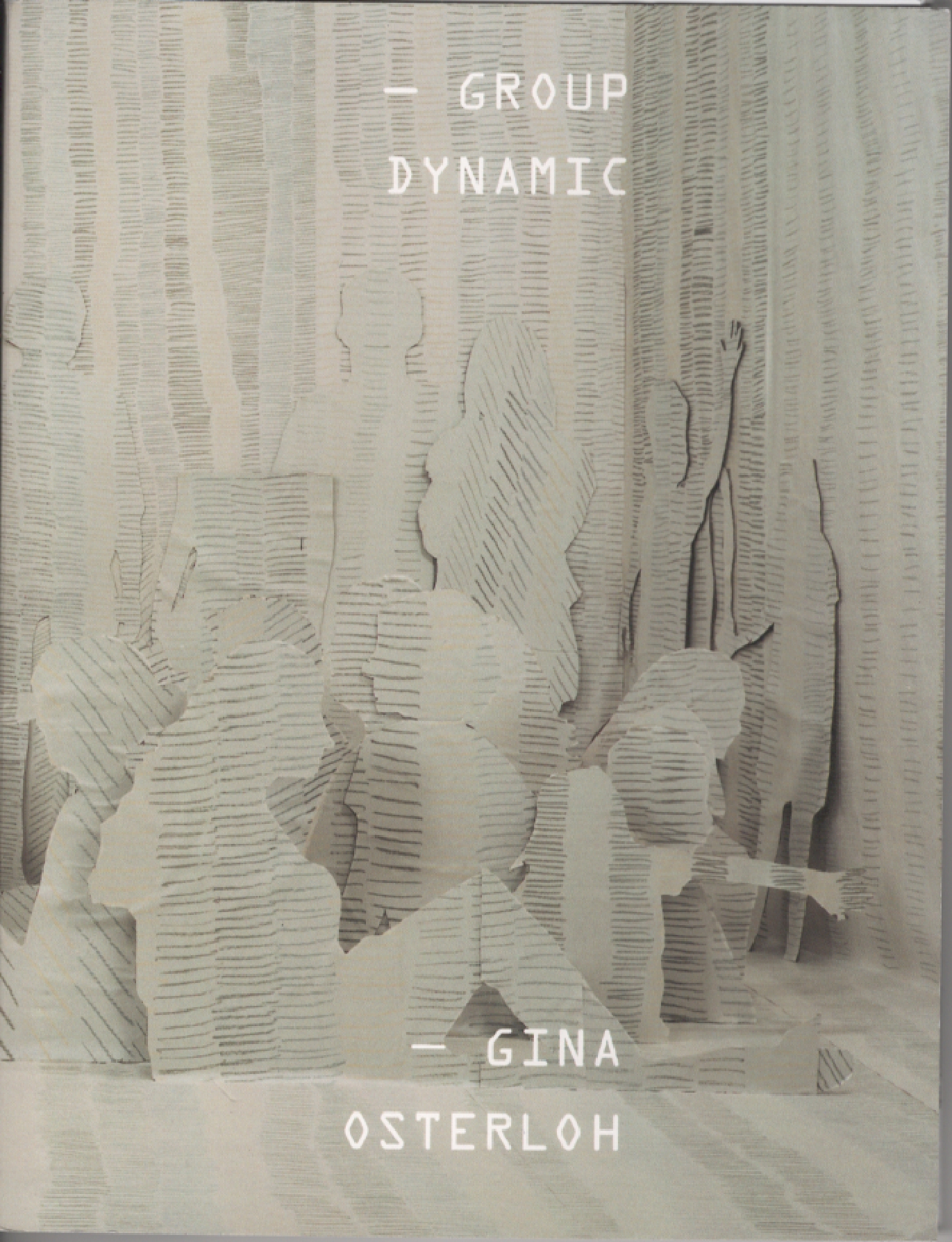 Part of the exhibition Group Dynamics and Improper Light. Curated by Carol A. Stakenas and Robert Crouch, Group Dynamics and Improper Light, led to the publication of Gina Osterloh’s first monograph, Group Dynamic. This text has its own exceptional presence through the use of its gatefold design, exemplifying LACE’s mission to cultivate and promote innovation in contemporary art-making, in all mediums and presentation formats. Features writing by Michelle Dizon, Kris Cohen, and Matthew Thompson. Artist included: Gina Osterloh 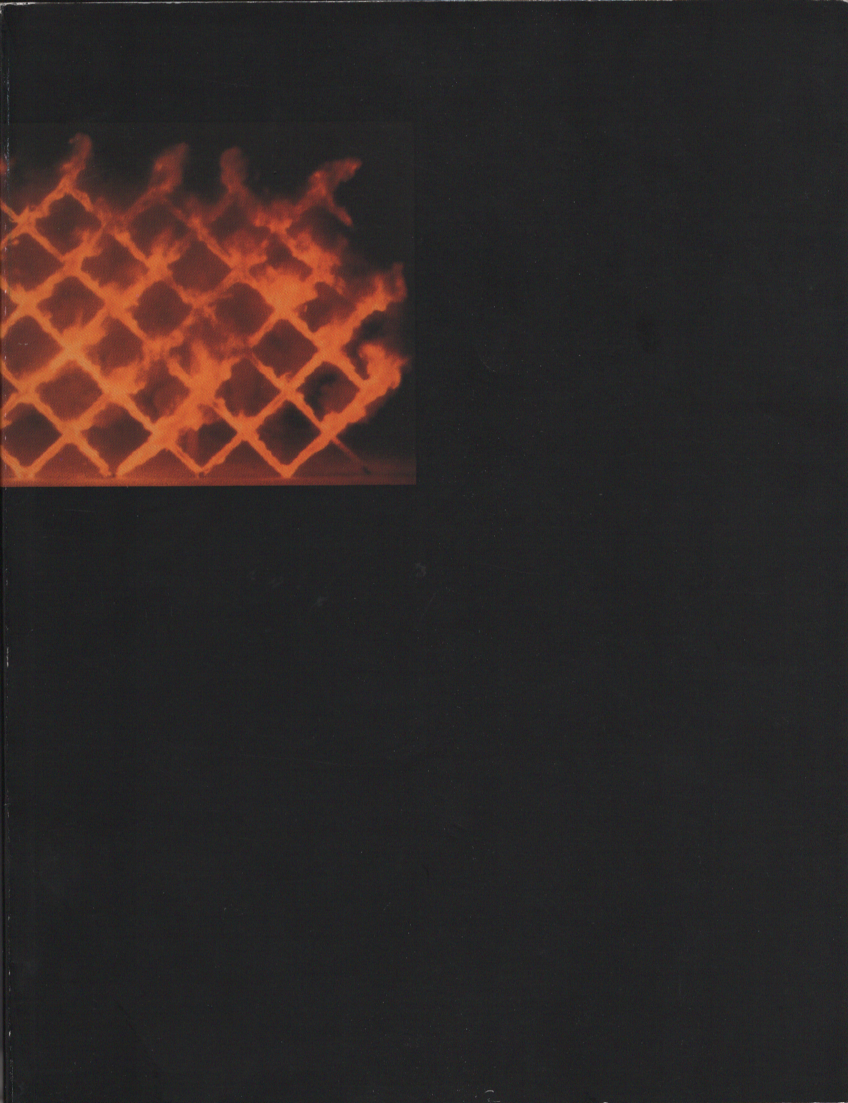 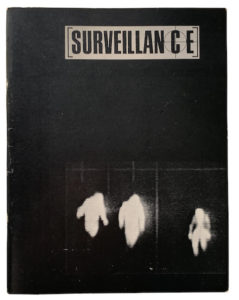 This exhibition featuring video, photography, and installations, brings to our attention to the technology and policies that currently affect our constitutional rights, and how such technology impacts and reconfigures the concept of the artist as an active observer that gathers information, processes it, and ultimately presents it. Curated by Branda Miller-video, installations; Deborah Irmas-photography.
See more about Surveillance from the LACE Archive.