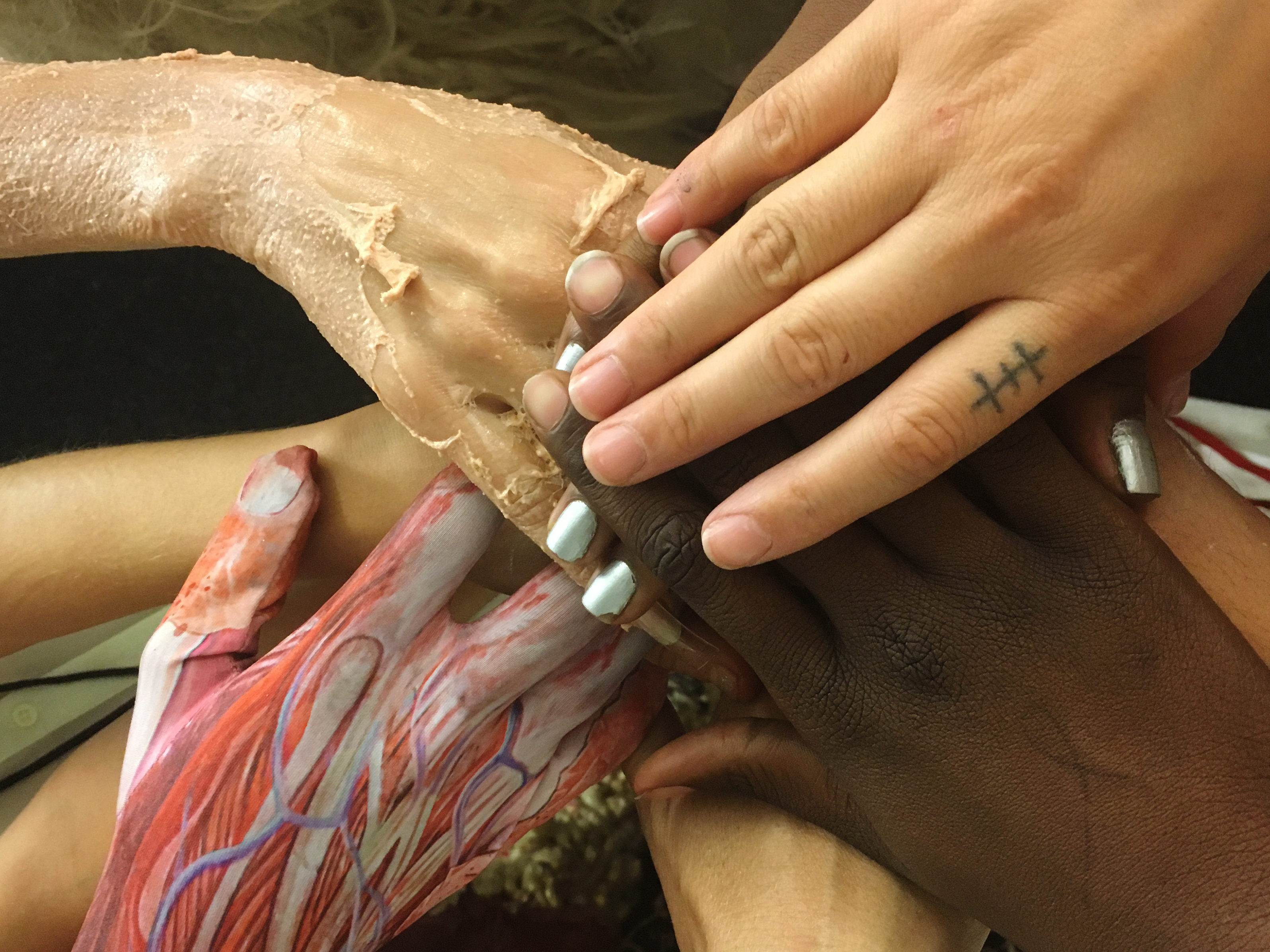 LACE’s Summer Residency presents CAVERNOUS by artist Young Joon Kwak and Mutant Salon, a collective of queer-trans-femme-POC artists and performers and a platform for community collaborations. CAVERNOUS is a kaleidoscopic environment that queers the last bastion of manhood in the domestic space—the man cave. CAVERNOUS fractures the patriarchal myth of male privilege, and provides an access point for an ongoing critical deconstruction of how we view our bodies, and reimagines alternative forms of existence and desire.

Welcoming viewers at the entrance of CAVERNOUS, Young Joon Kwak presents new sculptures and a living queer archive that reclaims erased narratives and traces a lineage of radical present-future queer arts communities in Los Angeles. Kwak’s archive features a selection of unclassified objects by unknown artists from the ONE National Gay & Lesbian Archives, as well as custom wigs by stylists from historic Hollywood retailers displayed on ceramic wig stands designed by Kwak as a tribute to the artistry of these under-recognized wig stylists. The archive also includes a screening of video works and documentation by historically radical local performance artist Johanna Went, connecting the community of Mutant Salon with LACE’s 40 year history of supporting queer and feminist performance art.

Deeper in CAVERNOUS, Mutant Salon creates a temporary autonomous zone that fosters community-building and celebrates the bonds of critical resistance and togetherness in the act of self-care. Mutant Salon features sculptures, videos, interactive installations, lounging spaces, a zine library, a spring, and other surprises, which will transform throughout the duration of the exhibition. The opening of CAVERNOUS will feature several spectacular performances by members of Mutant Salon.

The LACE Summer Residency program has a commitment to reconnect with Hollywood surrounding communities. For this summer, CAVERNOUS, members of Mutant Salon host a workshop of radical writing and zine production for the youth community of My Friend’s Place. Programming also includes activities for the senior community at the Los Angeles LGBT Center, including a conversation on oral histories of queer resistance presented in collaboration with Dirty Looks On Location.

July 20, 2018, Oral Histories of Queer Resistance in collaboration with Dirty Looks On Location and the Los Angeles LGBT Center. 7-9PM

As an effort to create a living archive of queer resistance and community in LA, Mutant Salon and Young Joon Kwak invite seniors in the LGBT community to share stories of past struggles and resistance, along with the current challenges faced by this community. 49 years after Stonewall Riots, younger generations are invited to learn about the time when it was illegal to be open about one’s sexual orientation or gender, while understanding that the struggle still persists and needs to be connected with its history. In order to understand our position in this current political and social climate, and to imagine the possibilities of what queer resistance could look like, it is crucial to hear and archive the stories of older generations who dealt with the stigmas of illness, perversion, and policing bodies. Black Ted is a collaborative think tank erected in 2017 by Dove Ayinde and Sarah Gail Armstrong. Black Ted focuses on Black consciousness, thought, and the exploration of such in a satirical manner in order to encourage greater accountability and action from an ever increasing apathetic and withdrawn society.

This lecture coincides with the performances by Adee Roberson and Anna Luisa Petrisko that pertain to the Emory Douglas: Bold Visual Language exhibition.

Young Joon Kwak (b. 1984 in Queens, NY) is a LA-based multi-disciplinary artist working primarily through sculpture, performance, video, and collaboration. Her work aims to change how we view our bodies by reimagining their form, functionality, and materiality—from static and bound to pre-inscribed power structures, to an expanded sense of bodies and their environs as mutable and open-ended. She is the founder of Mutant Salon, a roving beauty salon/platform for experimental performance collaborations with her community of queer, trans, femme, POC artists and performers, and the lead performer in the electronic-dance-noise band Xina Xurner. Performances and exhibitions include: the Hammer Museum, The Broad, REDCAT, and ONE National LGBT Archives, Los Angeles; Regina Rex and Smack Mellon, Brooklyn; Southern Exposure, San Francisco; Museum of Contemporary Art, Denver; Museum of Contemporary Art, Chicago; and Pavillon Vendôme Centre d’Art Contemporain, Clichy, France. During Summer 2018, Kwak will be the Artist-in-Residence at LACE (LA). Kwak was recently awarded the Art Matters Grant and the Rema Hort Mann Foundation’s Artist Community Engagement Grant. She received an MFA from the University of Southern California, MA in Humanities from the University of Chicago, and a BFA from the School of the Art Institute of Chicago.
Mutant Salon is a beauty salon and roving platform for collaborative performance and community-building that strives to foster connections between queer, trans, POC, womyn and mutant communities to celebrate an ethos of transformation and critical togetherness in the act of self care. In addition to offering haircuts, psychic readings, makeup, nails, tattoos, and other treatments, Mutant Salon embraces a continual metamorphosis of itself with each iteration to offer new aesthetic experiences and experimental modes of engagement with an audience.

“Multifaceted in every sense of the word, Sarah Gail speaks to her current state of being and desires and ambitions through her work. Be it in written form, painting, performance or an installation, we the audience are able to tell how she is coping with existing as a Black femme within a white patriarchal supremacist world. Her work is sincere in ways that most artists will never be able to create and blunt in a manner that many do not know how to create without victimizing.” – Brandon Drew Holmes

Dove Ayinde is a musician/artist in the Los Angeles,CA.
Themes of Black consciousness, social justice, and identity can be found throughout her work in zines, live performances, and in her collage art. Amongst various projects, she currently performs in post-garage band, Hausa.

Kim Ye (b. 1984, Beijing, China) is a Los Angeles-based interdisciplinary artist whose work incorporates performance, installation, video, and sculpture. She received her MFA from UCLA (2012) and her BA from Pomona College (2007). Her work traces the circulation of power by exploring concepts of labor, intimacy, and the exchange between an artist and their audience. She has performed and exhibited nationally and internationally at The Hammer Museum, Getty Center, Morán Morán, Material Art Fair, Human Resources, Machine Project, California Institute of the Arts, Pomona College Museum of Art, ACRE, Satellite Art Fair, and Visitor Welcome Center among others. She has been invited as a visiting artist and given talks at institutions such as Virginia Commonwealth University, Pomona College, University of California Los Angeles, and Loyola Marymount University.

Marvin Astorga (b. 1982, El Paso, TX) is an LA-based artist and musician. Marvin is one half of the electronic dance/noise duo Xina Xurner, and a member of Mutant Salon. Marvin explores queerness, Xicanismo, and transformation through sound and electronics.

Juan Manuel Gudiño is a Mexican artist that resides in Los Angeles who highlights strong traits in abstraction with painting, sculpture and installation. Gudiño has been in past collaboration with Los Angeles Chicano artist such as Maricon Collective and participated at Rafa Esparza Con/Safos at The Bowtie Project.

Dalton Chase Goulette is a multimedia/performance artist based in Los Angeles. Their work focuses on post-apocalyptic visions of the future, queering classical ideas of beauty and deterioration of self/ego/gender/. Dalton’s aspiration is to one day generate ectoplasm.
Dalton will be alongside Project Rage Queen traveling thru LACE for an indiscriminate amount of time in sculptural pieces they designed for Opening Night. This piece may or may not deteriorate throughout the night. How it survives is how it will be presented.
San Cha is a vocal priestess, a force of nature to be reckoned with, a Femme Xicanx Goddess who captivates audiences with their blend of Mexican Folk Music, Cumbia and Punk. Belting out ‘Gospel Ranchera Punk’ while twirling around the stage, San Cha will you leave you inspired, healed and transformed

Alli Miller is a Los Angeles-based artist, designer, and serial collaborator. Imagining artistic practice as a sedimentary process of material and social transformation (akin to a trash heap or scrap yard), Miller works in installation, performance, image-making, and visual research to rummage in the aesthetics of precarity, collapse, and by extension, the vast formlessness of the Earth’s ocean gyres. This approach formalizes a desire for multiplicity: to inhabit interstitial spaces as survival strategy, as means to assess current realities of representation and waste, and as catalyst to emancipatory weirdness and joy. In both solo and collaborative formations, Miller has exhibited and performed works at Spike Gallery (Berlin); Produce Model (Chicago); The Hammer (LA); neon>campobase (Milan); May Gallery (New Orleans); Beverly’s; SOHO20 (NYC); Southern Exposure (SF); and the 2016 Material Art Fair (Mexico City). Miller received a BFA from Cooper Union, and an MFA from USC in 2015.

Roxy Morataya is an ever curious Latinx Zinester and Artist from Santa Monica, CA. Inspired by American cartoons from the 1990s, street fashion and the Fat Acceptance movement, Roxy uses “Full-Figure” drawings and Zines as tools to dismantle stigmas against mental health, true body diversity (that is disabled, fat, all skin tone inclusive), LGBTQIA+ and Genderqueer representation. With the Zine Library included in CAVERNOUS, Roxy wanted a unique selection of work beautifully made by Artists who also use their talents and knowledge to empower themselves and others. Zinesters included in this selection include Sarah Gail Armstrong, Dove Ayinde, Paradise Khamalek, Myriad Slits, and Vëma Spencer.

Brandon Drew Holmes makes work about white people for Black people. Whether working as a writer, artist or curator BDH speaks directly upon the realities of and against white supremacy, and it’s inherently antiBlackness.
Micah James is an LA artist with enthusiasms in music, chopped up video and performance. He has presented at the Denver MCA, Wadsworth Atheneum, Echo Park Film Center and Nevada Museum of Art. He’ll be releasing several music projects in the fall, including a debut album entitled Heaven & Coin. His work deals with love (Venus), depravity and personal management. The lens is Black and queer.
Elliot Reed is an LA based performance artist. His work explores aspects of digital citizenship, sexuality, and self-hood. Teetering between epiphany and total collapse, Elliot constructs and bends narratives utilizing objects, voice, humor, and music. Shows in LA include The Hammer Museum, The LA Public Art Biennial, The Broad, Human Resources, PØST, The Box, UCLA, Commonwealth & Council, The Getty Center, and OUE Skyspace. Additional shows include VFD London, MOOI Collective Mexico City, The Gene Siskel Film Center, and venues in Paris, New York, Berlin, Tokyo, and Osaka. As of 2018 he has given artist presentations at California Institute of the Arts (CalArts), The School of The Art Institute of Chicago, Macalester College, University of Minnesota, and won the inaugural Bar-fund artist grant.
Xina Xurner is a sadical and sexperimental music/performance art collaboration between artists Marvin Astorga and Young Joon Kwak, whose cathartic performances combine diy and power electronics, mutated vocals, and bad drag, to expand ideas about queer and trans bodies. Their performances combine a variety of musical genres (including happy hardcore, industrial, drone metal, and disco), in order to create noise-diva-dance anthems that evoke a sense of death, decay, and transformation. Xina Xurner released their debut album “DIE” in 2012 and released their second album “Queens of the Night” (featuring collaborations with San Cha, Sarah Gail, and White Boy Scream) in 2018. Past performance spaces and events include sCum, The Smell, The Hammer Museum, Cool World, Mustache Mondays, LACE (Los Angeles), Smart Museum of Art (chicago), Bath Salts (nyc), and Bitchpork (chicago), as well as international performances in Paris, Tokyo, Seoul, Bogotá, and Mexico City.
SUPPORT
Support for CAVERNOUS is provided by the Angeles Art Fund, California Arts Council, the City of Los Angeles Department of Cultural Affairs, and The Andy Warhol Foundation for the Visual Arts. Special thanks to Erin Adams and Brainworks, the Craft and Folk Art Museum, the ONE National Gay & Lesbian Archives, Los Angeles LGBT Center and My Friend’s Place.