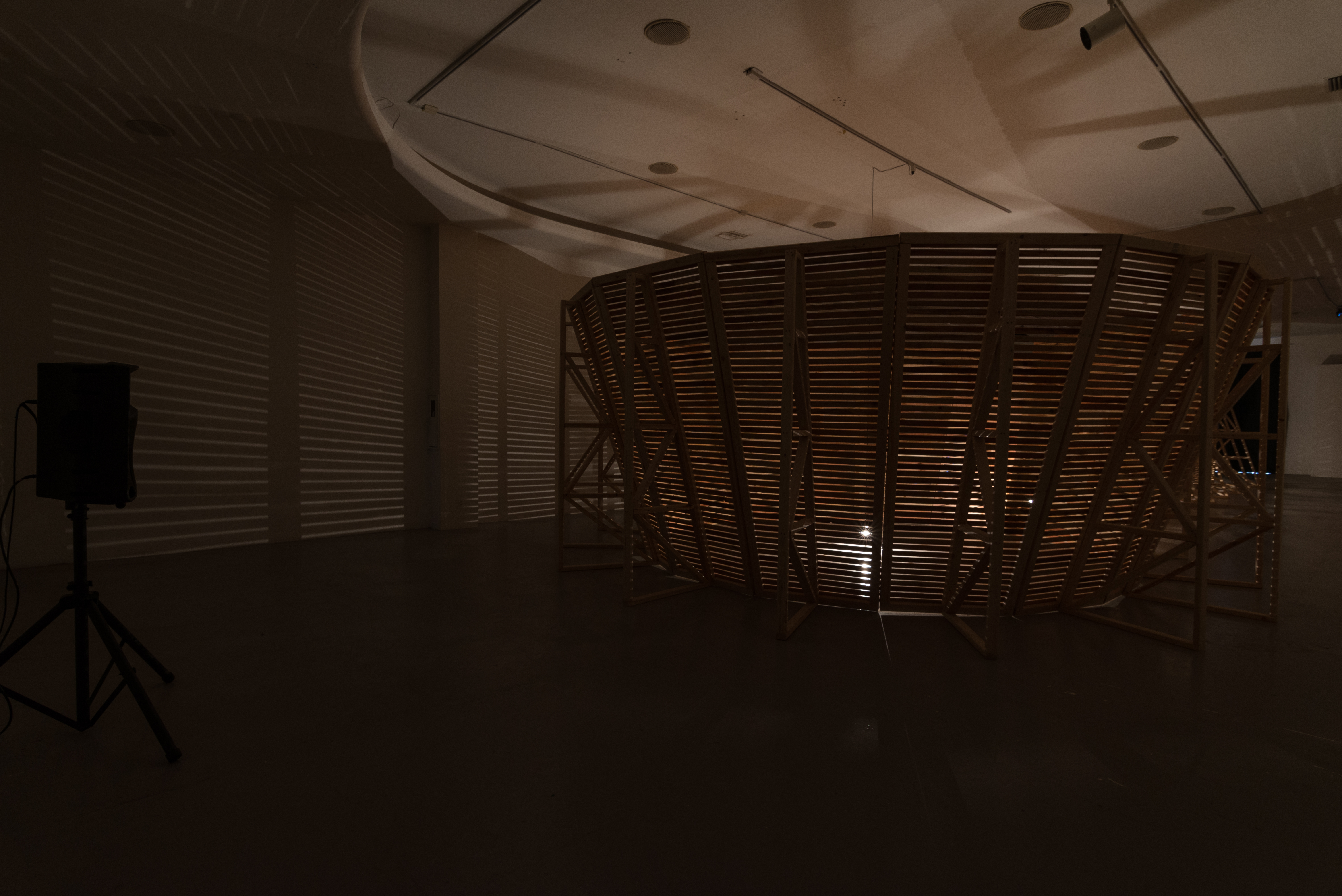 home away from addresses experiences of borders, displacement, and immigration procedures as they manifest in the everyday lives of immigrants, through an immersive installation in the main gallery at LACE.

Jimena Sarno created, designed, and built home away from during her summer residency. The installation occupies the entire main gallery with a permeable wooden structure — with a single entrance and circumventable from outside — that filters light through its gaps and produces oscillating shadows. Two video projections depicting details of self-portraits by immigrant youth shelter the central structure.
Sarno’s project is inspired by Hollywood flats, used as backdrops in film and scenic design, laths, wooden strips that were traditionally used to construct interior walls in domestic architecture, and borders’ holding areas, where people are enclosed while being processed to access another country. The video is composed of remnants of self-ideal portraits of the artist’s middle school students; the outline of these figures are used to create maps, revealing specific features through the rhythm of white, linear light accompanied by the digitally processed sound of a scanner and healing frequencies.

The space will be activated throughout the exhibition with a series of artists’ collaborations: performances, interventions, and workshops, as a call for self-determination to challenge and disrupt the structures that define our paths.

August 13, 6pm: Closing event: Listening party with live sound byJimena Sarno and artists, Cay Castagnetto and Arshia Haq, in collaboration with VOLUME. Launch of home away from publication printed by Tiny Splendor with an essay by Manuel Shvartzberg and texts and images by invited writers, artists and writing workshop participants.

Read a review of the exhibition in Temporary Art Review.

Jimena Sarno invited the C3LA Choir to reinterpret “The Star Spangled Banner” on opening night of home away from. In her exhibition catalogue, Sarno reflects on the meaning behind the classic American anthem from the perspective of an immigrant. She writes, “to ‘compose’ the choral piece for the opening night of home away from, the process was very simple. I printed the Star Spangled Banner—its lyrics was a mystery to me until that moment. I took a black marker and redacted it, leaving only words of war, violence and power. After redacting the lyrics on the sheet music, I invited the C3LA Choir to experiment with it within the installation space, sharing with them what I had in mind: to sing only those words, beginning to end, and then end to beginning. One of the choir members interpreted that I wanted them to hum the melody backwards, which they did, and on their first try, beautifully. We then decided to do the performance in three movements, starting in a circle within the installation: backwards hum, redacted singing and a final improvisation in which the 8 singers scattered, walking throughout the gallery, firing those words in loops and repetition across the space.”

home away from: C3LA performance at LACE from LACE on Vimeo.

The scent H.O.M.E.
Jenny Qaqundah, a Palestinian herbalist, has prepared a grounding scent with hints of citrus to uplift the spirit. The plants that she gathered for this therapeutic formula are vetiver, dalmatian, sage, dark patchouli, rosemary, cedar, nutmeg, bergamot and lemon. The blend has hints of her Arab home.

C3LA is an LA-based choral collective performing works exclusively within the last 25 years. C3LA has no artistic or executive director–rather, it is collectively ran by its members: highly-trained new-music singers who also perform with LA Master Chorale, LA Opera Chorus, De Angelis Vocal Ensemble, and other professional ensembles. Many of the singers are also conductors and/or composers. 40-50% of each concert is written by members of the ensemble and each piece is conducted by a different ensemble member. C3LA is a unique ensemble dedicated to performing outstanding new choral music; providing a venue for multi-faceted singer-composers and singer-conductors to collaborate; and challenging the traditional hierarchical model of our choruses and orchestras.

Niloufar Emamifaris a multi-media artist currently living and working in Los Angeles. Her recent works go towards figuring out how social subjects act within certain signs of power and privacy within predetermined and indeterminate urban tropes.  She’s an MFA candidate at the University of California, Irvine and holds her BFA from Soore Faculty of Architecture.

Nooshin Rostami is a New York-based interdisciplinary artist and educator. She was born in Shahroud and raised in Tehran, Iran. Rostami received her MFA from Brooklyn College (CUNY) in 2011. She has widely exhibited and presented her work in solo and group settings in the United States, Iran, India, Italy, Spain, Germany, Austria, and Canada. Rostami’s work has been featured in a number of publications such as Baumtestquarterly, Jadaliyya and Ajam Media Collective. Her research interests pertain to politics of geography, identity, and gender. In her work, she embodies themes often inspired by personal narratives through mediums of performance, installation, sculpture, drawing, and painting. Rostami currently lives and works in Brooklyn, N Y.

Jimena Sarno is a multidisciplinary artist and organizer. She works across a range of media including installation, sound, video, text and sculpture. Born in Buenos Aires, Argentina and currently living in Los Angeles, her experience as a South American immigrant informs her practice. She is the organizer of analog dissident, a monthly discussion gathering that features two invited artists and encourages intersectional approaches and critical engagement outside of traditional art institutions. Her work has been exhibited at LACE, PØST, Human Resources, UCI Contemporary Art Center, Control Room, Fellows of Contemporary Art and Grand Central Art Center among others. She is the recipient of the 2015 California Community Foundation Fellowship for Visual Artists.

Support for home away from is provided by the California Arts Council, the Department of Cultural Affairs, and the Visual Artists Network, a program of the National Performance Network.

This exhibition is a part of the Se habla español program at LACE. To view more bilingual projects, click here.