Give Now
You are here: Home / LACE / Listening, learning, and acting together. 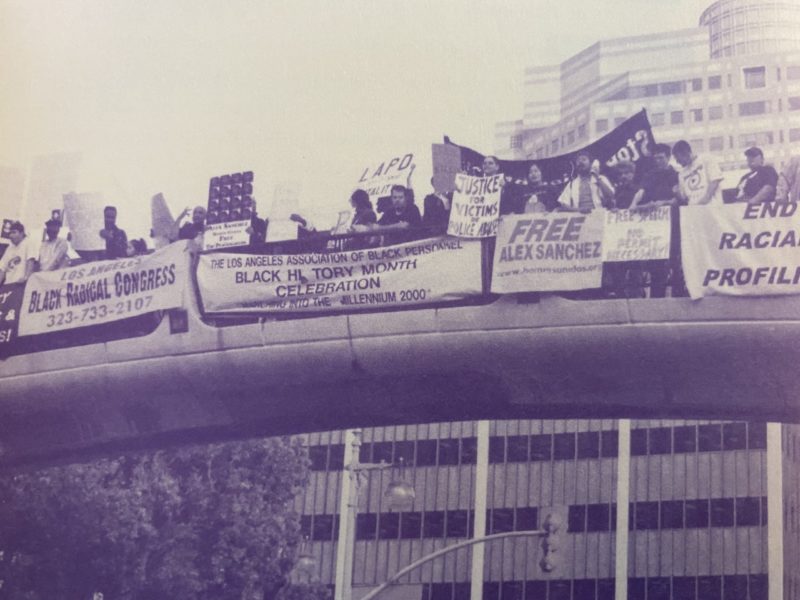 We are witnessing a critical moment in history. This past weekend we watched over 50,000 Los Angelenos gather in Hollywood to march for Black liberation. We admire the leadership from Black Lives Matter Los Angeles and countless Black organizations and organizers leading the frontline of these demonstrations across our city and the country. We recognize that not everyone is able to join protests outside, but we encourage everyone to stay informed and get involved in other ways.

We understand that an institutional message of solidarity is not enough. As part of our commitment to listening, learning, and acting to dismantle white supremacy and champion the Black community, LACE is sharing suggestions of important organizations and causes to donate to, and educational resources.

For the next month, we will be donating 100% of the proceeds from sales of LACE Publications to our friends from Southern California Library. We have numerous titles related to protest, organizing, and dissent, including Democracy When!?: Activist Strategizing in Los Angeles (2012), i can call this progress to halt (2018), Juan Downey: Radiant Nature (2018), LACE Living The Archive: Box Edition (2018) and a number of others. Shop here.

Donate, get to know, get involved!

SummaEveryThang
Summaeverythang is a community center based in South Central Los Angeles dedicated to the empowerment and transcendence of black and brown folks socio-politically and economically, intellectually and artistically. The community center was founded in 2019 by artist and fantasy architect, Lauren Halsey.

Black Trans Femme in the Arts Collective Emergency Fund
A partnership between Black Trans Travel Fund, For the Gworls and The Okra Project, BTFA Collective is raising funds to support trans protestors with resources, medical care and bail. All funds that are not needed will be redistributed to Black trans-led organizations who are helping Black trans folks facing social and economic violence.

The Center
The Center in Hollywood provides resources for low-income and homeless individuals and families in Hollywood.

For readings, we recommend this selection of books written by authors who participated in the event, “Variety of Futurisms”, organized by Sara Mameni and her research group, Center for Discursive Inquiry at California Institute of the Arts that took place during November of 2018 at LACE.

Letters to the Future: Black Women / Radical Writings by Erica Hunt and Dawn Lundy Martin
Negro League Baseball by Harmony Holiday
The Cracks Between What We Are and What We Are Supposed to Be: Essays and Interviews by Harryette Mullen
Unexplained Presence by Tisa Bryant
Becoming Human: Matter and Meaning in an Anti-Black World by Zakiyyah Iman Jackson

For lifting spirits, we’d like to suggest this body-stimulating playlist by artist Turay (pastelShade)! It was recorded in 2018 at the Southern California Library opening of Emory Douglas: Bold Visual Language. Link here.