As an effort to create a living archive of queer resistance and community in LA, Young Joon Kwak invited seniors in the Los Angeles LGBTQ+ community to share stories of past struggles and resistance, along with the current challenges faced by the community. 49 years after Stonewall Riots, younger generations are invited to learn about the time when it was illegal to be open about one’s sexual orientation or gender, while understanding that the struggle still persists and needs to be connected with its history. In order to understand our position in this current political and social climate, and to imagine the possibilities of what queer resistance could look like, it is crucial to hear and archive the stories of older generations who dealt with the stigmas of illness, perversion, and policing bodies.

A selection of quotes from Oral Histories: 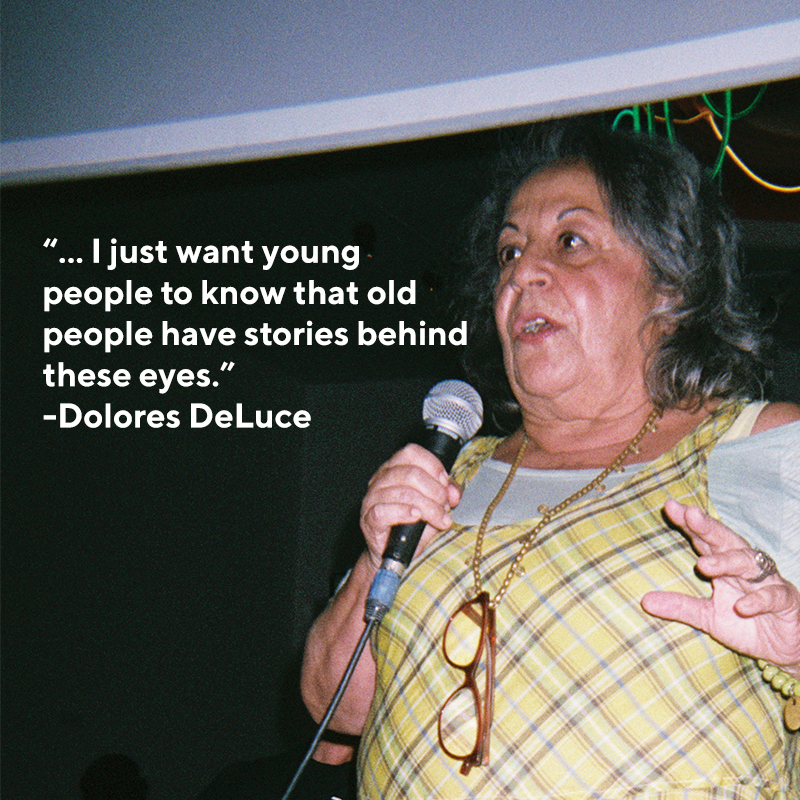 “I think it’s important just to put your truth out wherever you are and whatever situation you are. Let people know your story…I think it’s like really important for old people to share their stories with other people because when I was a youngster I didn’t have time for grandma either, you know? I was off and running but now that I am getting older I am learning that we can really learn from one another and generational education is really important.” 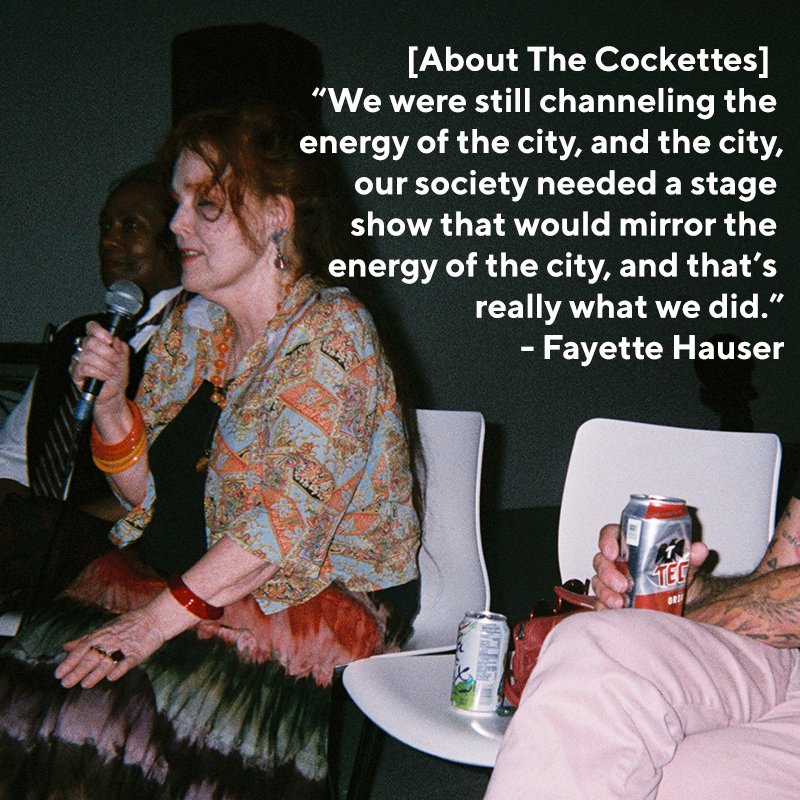 “They didn’t realize we were trying to be anti-theater, we were trying to be experimental, and magic happened on the stage, everybody would bring their A-game into the show, whatever you wanted to present, in the best possible way, the way you wanted it to look, you would bring that to the stage, and the mix was the magic. And we were not result-oriented, a lot of people didn’t understand that.” 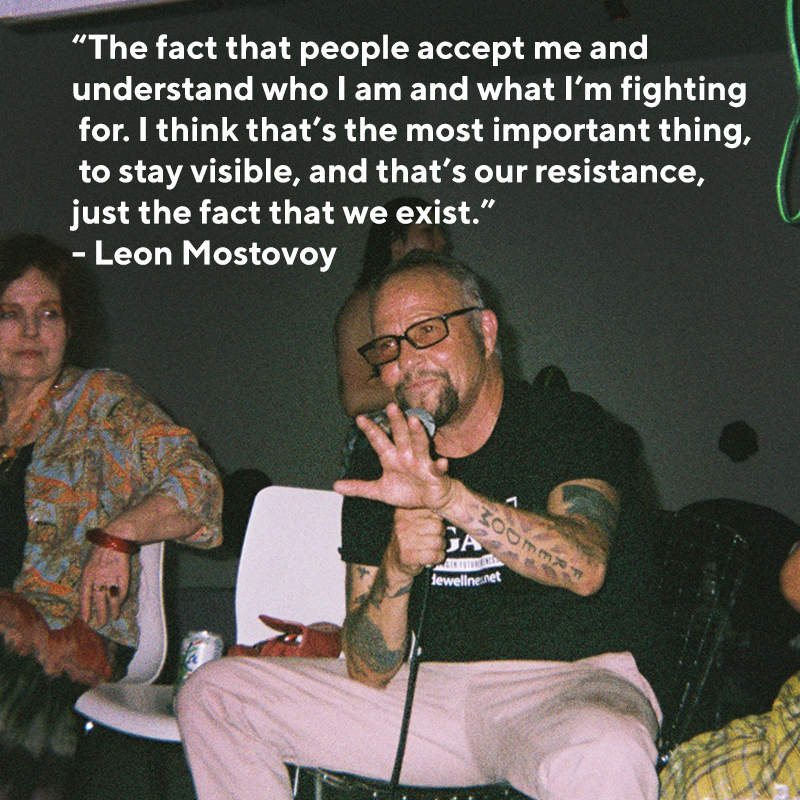 “People see us in one way and what you look like on the outside is not at all who you are on the inside, and therefore, that is going to be our strongest fight, and I believe it is very important for us to say very individually who we are and what we stand for, because the fight is coming around again.” 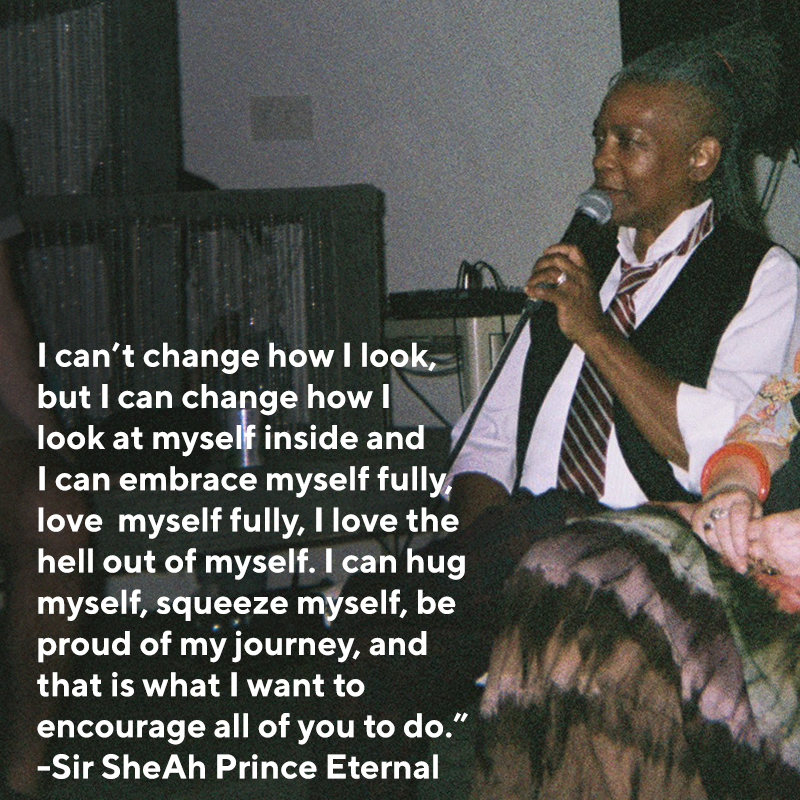 “I didn’t know what resistance meant at first when I first started hearing it, because it feels like I always had resistance.”

Bios
The beauty and bounty of drag, performance art, rock and roll, and hallucinogenic heaven collided everytime Fayette Hauser got dressed. As one of the few biological females in the celebrated Cockettes, Hauser stepped out, showed off, got wild, and lived in technicolor in the lights of The Family Dog, Janice Joplin and Andy Warhol. She has a voice that can only sound right, stories that will bend your mind and style that turns trends into law. Hauser grew up on the East Coast and came of age as the fertile underground of the 1960s were blossoming. She is a graduate of Boston University College of Fine Arts with a B.F.A. in painting and sculpture. Now living in L.A., she writes, lectures, and travels, sharing the photographs, stories, and thoughtful insights. Fayette is currently working on the Cockettes’ photobook due for release in Spring 2019, in time for Cockettes’ fiftieth anniversary.

Dolores DeLuce was mentored by Divine and made her theatrical debut with the infamous Cockettes at the Palace Theater in San Francisco in 1973. She went on to write and perform with White Trash Boom Boom, a woman’s theater collective that entertained the boys in gay bars and the women in California prisons from 1974-1976. She co-wrote the musical comedy Broken Dishes and was nominated for Best Performer in a Musical by the Bay Area Credits Association. She wrote a critically acclaimed and multimedia musical, The Last Dance of the Couch Potatoes, and played the lead in the Los Angeles production. DeLuce was a semifinalist at the Austin Screenwriting Competition and she authored a collection of short stories, Gay Widow, and three books in the Counter Culture Diva Series: My Life: A Four-Lettered Word, Confessions of a Counter Culture Diva, and, Blowjobs: A Guide to Making it in Show Business or Not, and The Lazy Gal’s Guide to Success and Enlightenment by Her Holiness the Dalai Diva. Dolores is also writing a musical based on My Life: A Four-Lettered Word and hopes to see a Broadway production

Leon Mostovoy is a transgender artist who has been creating on the front lines of the queer and political art movements for decades. Formerly Tracy, Mostovoy started his art career producing erotic images for On Our Backs magazine in the early ’80s. Mostovoy’s most recent projects explore transgender identity, transformation, sexuality and gender roles in contemporary U.S. society. His earlier photographic series have explored the struggles and triumphs of women as they strive for strength and independence living outside the parameters of heteronormative expectations. His installation, Death of My Daughter, was shown in Romania in 2011 to encourage awareness and acceptance in/of their transgender community. In 2011, Leon presented his first retrospective, (My) Queer (R)evolution, at Temple University in Philadelphia. He has had over fifty shows, including solo and group photography, and multimedia exhibitions. His work from the ’80s and ’90s was inducted into the ONE Archives, the largest LGBTQ Archive in the world, accompanied by an opening exhibition in January 2015 of his ’87-’88 Market Street Cinema photography series. He has another project that has gained a lot of recognition called the Transfigure Project which was first created as a traditional children’s flipbook and photographic installation in 2013, then, launched as an interactive website in 2015, to promote accessibility in the trans community. Transfigure Project installation is currently exhibited internationally with a limited edition of 250 hardbound Transfigure books sold online and at various bookstores in Los Angeles and New York.

SheAh Prince Eternal is a transgender male artist, writer, performer, life coach, spiritual advisor and a shaman that conjures love, wellness, and diversity in all that he does. SheAh Prince Eternal is committed to the assistance of people of all genders, sexual orientations, abilities, and ages to activate a better understanding of one’s spirituality, sexuality, and self-healing. Among SheAh Prince Eternal’s many accomplishments, he copastored—I’m going to screw up these names, some of them, um—Afraisiah temple of Womai and served as a high priestess to a dedicated circle of lightkeepers. He has studied Abraham Hicks’ teachings extensively and had many other great teachers and influences in his life, whose inspirations he wants to share throughout all of his work. And as a result, he realizes that a key to his success as a teacher and for the attainment of self-love and eternal bliss is that he is always also a student.