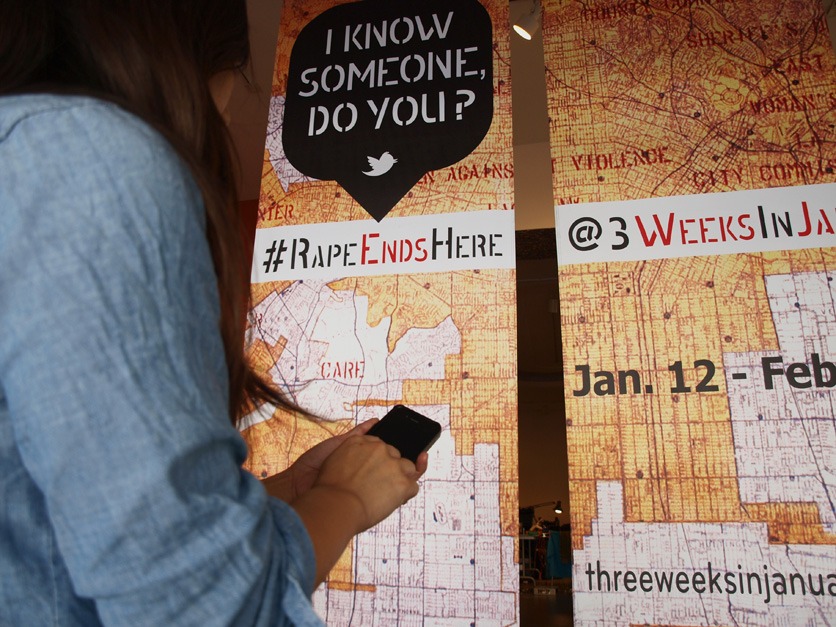 Three Weeks In January: End Rape in Los Angeles, a new work of public performance art by artist Suzanne Lacy in partnership with Los Angeles student and arts groups, political organizations and civic institutions including the Los Angeles Police Department (LAPD). Re-creating key aspects of an original 1977 artwork titled Three Weeks in May, the new project focuses on where Los Angeles is now – forty years into the anti-rape movement – and how to end violence against women. Three Weeks in January is part of the Pacific Standard Time Performance and Public Art Festival organized by LA>

Although victim services, healing practices, lawas and policies now exist in exemplary partnerships in cities like Los Angeles, sexual violence continues to deeply impact the lives of women, children and men. The project aks Why is rape still widely considered the most underreported violent crime in America?

According to the Department of Justice, 1 in 6 women in the U.S. experiences rape or attempted rape during her lifetime. Even as overall crime rates are trending downwards, sexual assaults show less reduction thnan other major crimes. Equally troubling, evidence suggests rising rates of violence toward young women. Twehty-two percent of reported rape victims are under 12 years of age; 54 percent are under 18, and 83 percent are under 25.

The 2012 crime statistics used in Three Weeks in January are difficult to compare to those of the 1977 project in part due to the FBI’s definition of rape, written in 1929, which has been challenged as too narrow. At stake is the allocation of resources to fight a violent crime that is more prevalent than reports indicate. As of this writting, the FBI’s current definition of rape is being updated. This change will expand the definition of victims and the types of sexual assault that will be counted in the FBI’s Uniform Crime Report. The new language removes the word “forcible” from the definition and will now include rapes committed against men, as well as broader range of sexual acts.

“Now, over thirty years later, we can no longer say that rape is unspoken, nor that services and policies do not exist,” says artist Suzanne Lacy, “yet violence against women remains, locally and globally, with implications more pronounced than ever. This project will mobilize young women, men, and an intergenerational coalition across the region to consider the next steps in a necessary agenda against sexual violence.”

A hallmark of Three Weeks in January is the Los Angeles Rape Map, installed at Deaton Auditorium, in front of the LAPD in downtown Los Angeles. Each day for three weeks, young women and men mark the map with the prior day’s police reports. Surrounding this activity there will also be a press conference at the site of the map and Critical Conversations, multi-vocal events with partnering organizations, that take place in January throughout the L.A. region. As in the original work, art is the platform to organize a series of presentations that collectively bring renewed focus to the effort to end rape.

As in the original, the form and structure of this the work includes activism, education, media, city politics and art, and participants from all of these areas. A schedule of 30+ events, organized across the Los Angeles metropolitan region, will begin on January 12 and continue through February 1, 2012.

• I Know Someone, Do You? #RapeEndsHere – Social media action campaign, including a six-block Hollywood Blvd. banner installation inviting participation and dialogue in the online community. Twitter campaign begins January 10.

• Mayor Antonio Villaraigosa joins Suzanne Lacy for a press kick-off at the site of the LA Rape Map, January 12.

• Candlelight Ceremony with youth, politicians, activists and artists looking towards the future of ending rape in LA on January 27 at the site of the LA Rape Map.

Suzanne Lacy began her career in 1972, coincident with the beginnings of the feminist movement. For the past forty years this artist and author has been a leading proponent for justice for women, with women as diverse as high school girls in Oakland, battered women in Spain, women in the U.S. prison system, and housewives in Korea. In 1977, Lacy created Three Weeks in May, a pioneering social artwork that brought media attention to the widespread incidence of rape in Los Angeles. Subsequently she created a media performance on the Hillside Strangler with Leslie Labowitz, touching off a historic movement of artists addressing violence against women.

Lacy’s work includes installations, video, and large-scale performances on social themes including The Tattooed Skeleton for the Museo Nacional Centro Reina Sofia in Madrid that focuses on domestic murder of over sixty women each year in Spain, a performance of Prostitution Notes, exposing realities of prostitution in 1974, at the Serpentine Gallery in London, and Anyang Women’s Agenda in Korea, where diverse subjects, including violence against immigrant women, presented in performance to the mayor and city council. One of her best-known works to date is The Crystal Quilt (Minneapolis, 1987) a performance with 430 older women, broadcast live on Public Television. During the nineties she worked with teams of artists and youth to create an ambitious series of performances, workshops, and installations on youth and public policy, documented by videos, local and national news broadcasts, and an NBC program.

Also known for her writing, Lacy edited the influential Mapping the Terrain: New Genre Public Art, published in 1995 by Bay Press and has recently released Leaving Art: Writings on Performance, Politics, and Publics, 1974-2007 by Duke University Press. She has published over 60 articles on public art. Suzanne Lacy: Spaces Between is a monograph by Sharon Irish, published by University Minnesota Press. Lacy’s work has been funded through numerous foundations, including the National Endowment for the Arts and The Guggenheim, Rockefeller, Surdna, Nathan Cummings, Durfee Foundation, and California Community Foundations.

Lacy has had a prolific career in higher education as a founding faculty member of California State University at Monterey Bay. From 1987-97 she was Dean of the School of Fine Arts at the California College of Arts, and in 1998 she became Founding Director of the Center for Art and Public Life. In 1996-7 she co-founded the Visual and Public Art Institute at California State University at Monterey Bay with artist Judith Baca. Active in Oakland cultural politics, Lacy was a member of Mayor Jerry Brown’s education cabinet and an Arts Commissioner for the City of Oakland. Currently she is the Chair of the Graduate Public Practice Program at Otis College of Art and Design.

Read the flyer for Three Weeks in January