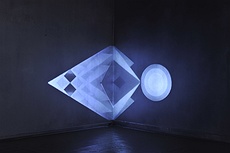 Presented as part of Ceci n’est pas…Art Between France and Los Angeles, Cassiere and Quistrebert will present work and discuss both their individual practices as well as the projects they will be exhibiting as part of The End of the Night in the fall.

The End of the Night is the second exhibition in a two-part exhibition cycle Kirszenbaum will research and develop during her residency at LACE. This pair of exhibitions explores the visual influence of two major experimental filmmakers: one French, Henri-Georges Clouzot, and one American, Kenneth Anger. The first project, La Fin de la Nuit, will take place at the Palais de Tokyo (21 June  – 9 September 9, 2013), and frames an exploration of Los Angeles-based artists through the prism of Kenneth Anger’s aesthetics. The second exhibition in the cycle, The End of the Night, will open at LACE in the fall (16 October – 15 December 2013) and will examine the impact of Clouzot’s unfinished filmL’Enfer on notions of visual and sound experimentation, the kinetic, and optical illusions in contemporary French art.

Please note this event will take place next door to LACE at the LA Forum for Architecture and Design at Woodbury Hollywood, 6518 Hollywood Boulevard.

Collaborative duo Florian & Michael Quistrebert (b. 1982 and 1976 in France, live and work in Amsterdam and Paris) have grounded their practice in abstract painting, video, invoking incisive geometrical forms, architectural structures and experimental imagery. Their series of paintings Gradient comprises multi-layered pieces playing with atmospheric spray-paint and bleach technique, realized through a reversed photographic technique, where the bleach simultaneously illuminates and erodes the canvas. With images made of shadows, smoke, or light reflection, they create videos of art-deco aesthetics along with strong mystical references that recall early 1930s movies. The video-installation The Eighth Sphere is based on a double channel projection where the same sequence is shown on both sides of a chrome painted corner. While both projections are symmetrical in space, they are also desynchronized in time, creating a mirror effect that builds up through the viewer’s memory. Reminding of geometrical abstraction and early experimental cinema, such as Hans Richter or Laszlo Moholy-Nagy, the projected images actually come from edited captures of shadows.

Pierre-Laurent Cassière (b. 1982 in France, lives and works in Paris) oscillates between producing sound installations, expanded cinema and performance practice, interrogating vibrating fields and plays with the limits of the viewer’s perceptions. Influenced by the archeology of media, his systems turn audiovisual technologies into minimal and contemplative experiences. In his sound installation Pulse (2010-2012), low frequencies sound emissions are produced by elements installed in the exhibition space. Through cinema’s optical sound technique, a small and silent light mill called “Crookes radiometer” is transformed into a powerful noise generator. The disturbing light, coming from a slowly flicking bulb, generates the motion of the mill, which wings alternatively obstruct a laser ray pointed on a photo sensor. Once amplified, the signal is directly transmitted to the architecture through low frequency transducers, resulting in shaking the walls, reversing the senses and provoking a strong disoriented feeling within the vibrating exhibition space.

Martha Kirszenbaum is an independent curator based in Paris. She worked at the Department of Media and Performance at the Museum of Modern Art in New York, the Cabinet of Photography at Centre Georges Pompidou, and as a research assistant at the New Museum, New York. Independently, she has organized exhibitions, projects and screenings in the United States (Austrian Cultural Forum, New York; Harris Lieberman Gallery, New York), Europe (Palais de Tokyo, Paris; Galerie Crèvecoeur, Paris; European Culture Congress, Wroclaw; Institute for Contemporary Art, London; Tramway, Glasgow) and at the 2012 Marrakech Biennale. She was a curator-in-residence at the Center for Contemporary Art in Warsaw, and guest curator at the Belvedere Museum/21er Haus in Vienna where she organized two interventions on the collection in 2012. She is a regular contributor for Kaleidoscope, L’Officiel, and Voxpop, and has led seminars on curatorial practices at Université Paris VIII and Parsons Paris.

This residency is made possible with the generous support of Ceci n’est pas…Art Between France and Los Angeles and Guest Haus Residency.