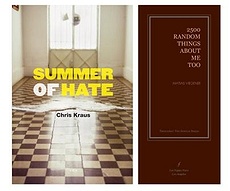 Join LACE, Les Figues Press & Semiotexte in celebrating the launch of two new works from Los Angeles-based authors Chris Kraus and Matias Viegener. Both authors will be reading excerpts from their text.

Kraus’ 1997 debut novel I Love Dick was hailed by Rick Moody as “one of the most important literary events of the past two decades,” and has become a cult classic. New York Times critic Holland Cotter has called her “one of our smartest and most original writers on art and culture.” In her new book, Summer Of Hate, Kraus turns her attention to the glaring disparities in expectations and consciousness that have come to define American life.  “Summer of Hate moves closer to the diseased heart of the USA: dried-out, drugged-out, paranoid New Mexico. Reading it is like watching a car crash happen in slow motion. Few writers are as intelligent and honest as Kraus and no one sees so clearly,” writes Keith Gessen, author of All The Sad Young Literary Men.

Waking up from the chilling high of a dangerous sex game, an art world insider travels to Albuquerque from her home in LA. It’s summer, 2005. While Catt’s stated goal is to reinvest some windfall real estate gains, she’s secretly seeking escape from her niche in the insular cosmopolitan bubble she’s strived so hard to attain. In Albuquerque, she meets Paul Garcia, a recently sober ex-con who has just served sixteen months in prison for defrauding Halliburton Industries, his former employer, of $873. Deprived on the most cellular level of knowledge and hope, Paul makes plans, with Catt’s help, to attend UCLA. But then he’s arrested in Arizona on a 10-year old bench warrant. Caught in the nightmarish Byzantine world of American justice, Catt and Paul’s empathic idyll of saving each other’s lives seems cursed to dissolve.

On February 6 2009, Matias Viegener logged into Facebook and wrote a short list of random things about himself in response to a friend’s meme, “25 Random Things About Me.” The next day, Viegener composed a second list, two days later a third, and then a fourth. Viegener limited himself to a single day for each list, leaving his topics unlimited while aiming to avoid repetitions.  His reflections wander through past and present—the writing and art scenes of New York and Los Angeles in the 80s and 90s, his sexual adventures, his friendship with Kathy Acker, and his current art practice as a co-founder of the Fallen Fruit collaborative. Neither memoir nor diary but with aspects of each, 2500 Random Things About Me Too is an experiment in the construction of identity in a Facebook-drenched world of self-manufacturing and short attention spans.  Possibly the first book to have been composed entirely on Facebook, 2500 Random Things About Me Too is a text-cloud raining art, dogs, sex, death and fruit.

Chris Kraus is the author of four novels and two books of art criticism. “Kelly Lake Store,” her monograph on art outside the art world, is forthcoming this Fall from Companion Editions at Reed College. More on the upcoming publication at summerofhate.com.

Matias Viegener is an artist, author and critic who teaches at CalArts. He is one of the founders of the art collective Fallen Fruit, which has exhibited internationally in Mexico, Colombia, Denmark, Austria, and at LACMA, the Yerba Buena Center for the Arts, and ARCO 2010 in Madrid. He writes regularly on art for X-tra and ArtUS, has recently published in Cabinet, Journal of Aesthetics & Protest, Radical History Review, and Black Clock. He is the co-editor of Séance in Experimental Writing and The Noulipian Analects.  His book of experimental non-fiction, 2500 Random Things About Me, Too has recently been published by Les Figues Press. More on the book atlesfigues.com/lfp/316/2500-random-things-about-me-too.