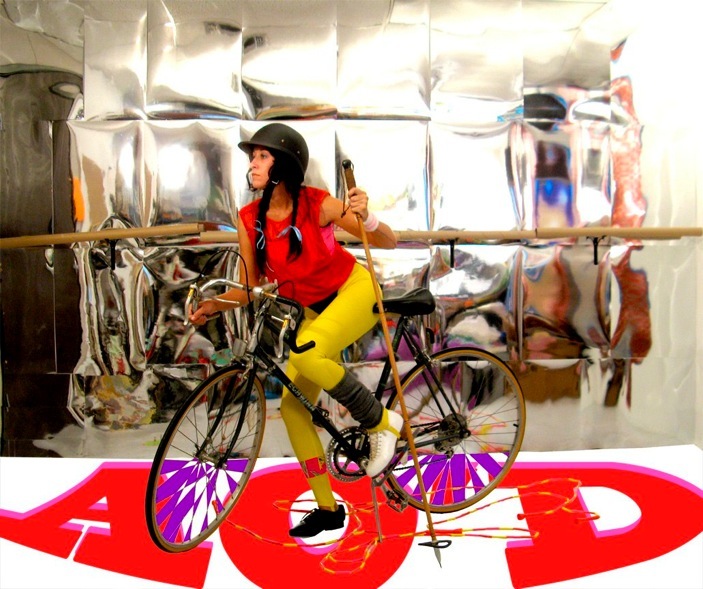 Alison O’Daniel will lead a movement workshop based on the seemingly unimportant scenes in films which serve to bridge together climactic moments within cinematic narrative.  These “filler” moments exemplify the interstitial ‘narrative traveling’ characters do to get from one emotion or location to another and are often comprised of the 5 senses distilled down to their core — for example, a character (Baby) holding a watermelon and watching gyrating dancers  is just as potent, if not more so, than the moment she first attempts to dance in Dirty Dancing. Through a series of exercises and open gestures, O’Daniels will lead the class through loosely constructed and subtle movement narratives, implying that a future scene pregnant with profound possibility is imminent.

ABOUT THE ARTIST
Alison O’Daniel works across disciplines, examining perceptual and emotional sensitivity between people, objects and environments. She creates sculptures and drawings, sound-baths, sports/dance teams, and recently a feature film with live musical accompaniment. In her work, architecture and objects act as hearing/perception aids, communicating messages to characters through their bodies via sound, form and color.

She studied at the Cleveland Institute of Art, Goldsmiths College, University of London, and UC, Irvine and was a resident at the Skowhegan School of Painting and Sculpture in 2007, the Vermont Studio Center and Genesis Project, L.A. She taught at the Cleveland Institute of Art and will teach at Otis starting in the fall. Her videos have screened at Oberhausen, Recontres, and Stuttgart Filmwinter film festivals and she has been a recipient of a Puffin foundation grant, the Agnes Gund Fellowship, and the Medici Foundation award.
See more of her work on her website, www.alisonodaniel.com