DISSENT: what they fear is the light 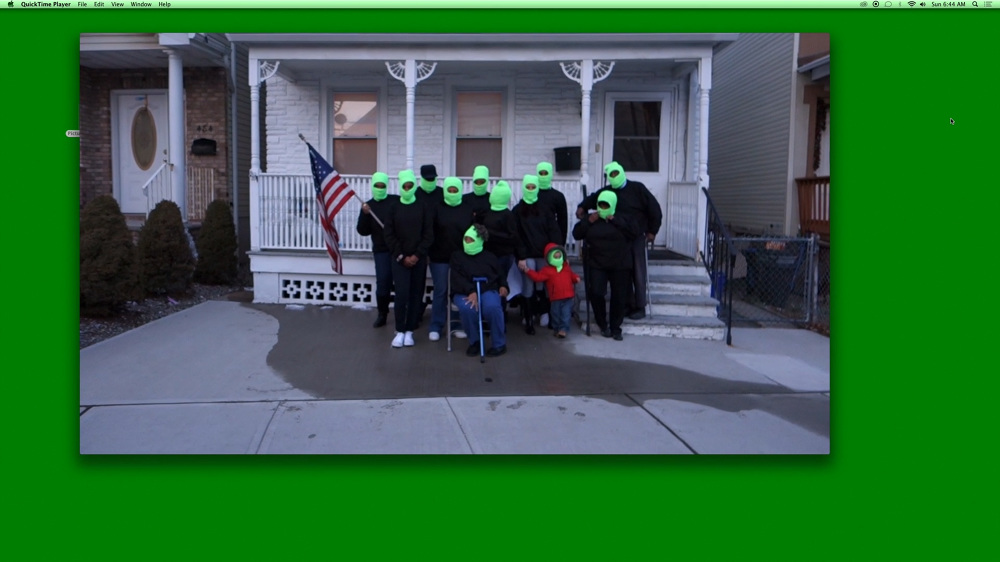 DISSENT: what they fear is the light is a group exhibition that explores the changing understanding of privacy and control in a world inundated with surveillance and oversharing. The political discourse of this century has been framed by the fear of “terror” and the subsequent need to police anything and everything that is deemed a threat. Under the promise of security, local and federal governments enhance surveillance techniques that seem capable of drilling into individual thoughts and desires.

The exhibition considers issues of visibility and invisibility within governmental and institutional administering, tracking, and policing practices. Topics explored include: the National Security Administration’s blind surveillance program and eradication of privacy, the increasing militarization of the border, the prevalence of racialized police violence, and identity construction through self-surveillance technologies.

The relentless collection of personal data amounts to a system that aims to monitor and categorize all subjects, where foreign and unrecognizable identities are marked harmful and predatory. Notions of terrorism and otherness are employed to expand surveillance and policing, which disregard the need for warrants or for suspicion of criminal activity. Misleadingly promoted as a means to protect citizens from foreign dangers and to further democracy, surveillance ultimately serves to oppress internal dissent and censor political insurgency.

DISSENT takes LACE’s seminal 1987 exhibition, SURVEILLANCE, as its starting point. Curated by Brenda Miller and Deborah Irmas, SURVEILLANCE considered questions of privacy and access around uses of technology, and delved into artists who exposed and discussed the policies around technology that affect individual constitutional rights. Read more about Surveillance (1987) here.

The project includes an accompanying catalogue, designed by Still Room.

Please check back for a schedule of public programs.

Image: Sondra Perry, Lineage for a Multiple-Monitor Workstation: Number One, 2015. Courtesy of the artist.

LAURA AGUILAR was born in 1959 in San Gabriel, California. Aguilar attended the photography program at East Los Angeles Community College and continued her studies with The Friends of Photography Workshop and Santa Fe Photographic Workshop. Her work has been exhibited at the Venice Biennial, Italy; the Los Angeles City Hall Bridge Gallery, the Los Angeles Contemporary Exhibitions (LACE), Los Angeles Photography Center,Women’s Center Gallery at the University of California in Santa Barbara, Self Help Graphics, all in CA; and the University of Illinois in Chicago, IL. She was an Artist in Residence at Light Works in Syracuse, NY in 1993; received a Brody Grant from the California Community Foundation in 1992; received an Artist in Residence grant from the California Arts Council through the Gay and Lesbian Community Services Center of Los Angeles in 1991/92; and an Artist’s Project Grant from LACE in that same year. Laura Aguilar will have her first comprehensive retrospective at the Vincent Price Museum as part of the Getty’s Pacific Standard Time:LA/LA. To read more about the retrospective click here.

BARBARA ESS was born in Brooklyn, NY and received a BA in English literature and philosophy at the University of Michigan. Most of her art life has been involved in making photographs, video pieces and music projects, which have been exhibited widely in the U.S. and Europe. She is Associate Professor of Photography at Bard College in Annandale, New York and on the faculty of the ­Milton Avery Graduate School of the Arts. She is most known for her images made with homemade pinhole cameras, but later began using other porous low-fi devices including small hand-held telescopes, “spy” radio cameras, toy microscopes, TV traffic cams, internet vacation and weather cams to express the uncertainties of perception and our subjective relationship to the phenomenal world. In 2009 she signed up as an online deputy sheriff for an internet surveillance site on the Texas/Mexico border with access to an array of low-resolution night vision cameras. She felt “teleported and present to real time non-events thousands of miles away.” Her interest in this work was to feature the role of a distanced but engaged spectator observing with unselfconscious but focused attention—not as surveillance, but as a way of connecting the self “in here” with the world “out there”.

COCO FUSCO (b.1960), New York-based interdisciplinary artist and writer, explores the politics of gender, race, war, and identity through multi-media productions incorporating large-scale projections, closed- circuit television, web-based live streaming performances with audience interaction, as well as performances at cultural events that actively engage with the audience. Fusco’s work was recently on view at Manifesta 11 What People Do For Money, curated by Christian Jankowski, Zurich, Switzerland (2016), All the World’s Futures at the 56th Venice Biennale curated by Okwui Enwezor and at the Göteborg International Biennial for Contemporary Art, Germany curated by Elvira Dyangani Ose (2015). Fusco’s performances and videos have been included in the 8th Mercosul Biennial, Porto Alegre, Brazil (2010); two Whitney Biennials (2008 and 1993); VideoBrasil, São Paulo (2005); Performa 05, New York (2005); Shanghai Biennale, China (2004); Johannesburg Biennial, South Africa (1997); London International Theatre Festival, England (1995); and Sydney Biennale, Australia (1992); among others. Her work has recently been featured at the Brooklyn Museum (2015); Haus der Kulturen der Welt, Berlin (2015); Walker Art Center, Minneapolis, MN (2014); Centre Pompidou, Paris (2014); New Museum of Contemporary Art, New York (2013); Contemporary Arts Museum Houston, TX (2012); Museo Nacional Centro de Arte Reina Sofía, Madrid (2012); Tate Liverpool, England (2010); among others. Fusco is the Andrew Banks Endowed Professor of Art at the University of Florida and author of English is Broken Here: Notes on Cultural Fusion in the Americas (1995), The Bodies that Were Not Ours and Other Writings (2001), and A Field Guide for Female Interrogators (2008). She is the editor of Corpus Delecti: Performance Art of the Americas (1999) and Only Skin Deep: Changing Visions of the American Self (2003). Her most recent book Dangerous Moves: Performance and Politics in Cuba was released by Tate Publications (2015). She has won numerous awards, including: 2016 Greenfield Prize in Visual Art; Guggenheim Fellowship (2013); Absolut Art Award for Art Writing (2013); CINTAS Foundation Visual Arts Fellowship (2014–2015); USA Berman Bloch Fellow (2012); and Herb Alpert Award in the Arts (2003). Fusco received her B.A. in Semiotics from Brown University (1982), her M.A. in Modern Thought and Literature from Stanford University (1985), and her Ph.D. in Art and Visual Culture from Middlesex University (2007). Since 1988, she has performed, lectured, exhibited, and curated around the world.

METAHAVEN Founded by Vinca Kruk and Daniel van der Velden in 2007 as a design and research studio, Metahaven has come to define a new methodology in graphic design. The studio’s speculative practice privileges the vocabulary of graphic design as a means of knowledge production, using it as a tool to analyze organizational models and power structures. Investigating political and economic design—including nation branding and logo production—in relation to statehood, currency and information networks, Metahaven places particular emphasis on transparency and visibility.

MPA is an artist who engages her body in performance and installation pieces. She explores the social and political implications of the body as a site of resistance in her work. Her body of work Directing Light onto Fist of Father (2011), shown at Leo Koenig Inc. combined 16mm film and a plaster cast of her father’s fist in an installation inciting three durational performances. Trilogy (o) (2012) centered on photographs of Nike war missiles as an orbiting moon calendar at the arts cooperative Human Resources in Los Angeles. MPA’s works and performances have been seen at the Swiss Institute, the Whitney Museum, Los Angeles Contemporary Exhibitions, Stedelijk Museum, the Center for Performance Research, The Kitchen, Hudson Guild Theater, the Art Institute of Chicago, the Museum of Contemporary Art Chicago, Art in General, Museo de Arte Contemporáneo, Oaxaca; and Meat Market Gallery, Washington D.C. MPA is a frequent collaborator, and is visible in works by contemporary photographers, painters, and performers. After her FCA support, MPA relocated to Twentynine Palms, California to research somatic practices. Prior to her Grants to Artists, MPA received a Community Arts Assistant Program Grant in Chicago (2006), and was an artist-in-residence at La Pocha Nostra Residency in Oaxaca, Mexico (2006); the Hancock & Kelly Live Artist Residency, Nottingham, UK (2007); the International Artists Studio, Stockholm (2010); and the Denniston Hill Artist Residency in Woodridge, NY (2010). MPA received her B.F.A. from Hampshire College, and is a visiting faculty member in New Genres at the University of California, Los Angeles.

SONDRA PERRY is an interdisciplinary artist whose works in video, computer-based media, and performance explore what Perry calls the “slippages of identity” that define subjective experience in the digital world. Perry investigates themes of power and agency, especially as they are determined by race and gender identities. She was born in Perth Amboy, New Jersey, in 1986. Perry holds an MFA from Columbia University and a BFA from Alfred University. In 2015, the artist’s work appeared in the fourth iteration of the Greater New York exhibition at MoMA/PS1. Other exhibitions include Disguise: Masks and Global African Art, Seattle Art Museum, Seattle, 2015; A Curious Blindness, Miriam & Ira D. Wallach Art Gallery, New York (2015); Of Present Bodies, Arlington Arts Center, Arlington VA (2014); and Young, Gifted, & Black: Transforming Visual Media, The Camera Club of New York (2012). Perry performed Sondra Perry & Associate Make Pancakes and Shame the Devil at the Artist’s Institute, New York, in 2015. The artist’s work has been screened at venues such as Les Voutes, Paris, France; Light Industry, New York; Video Art and Experimental Film Festival, Tribeca Cinemas, New York; Lu Xun Academy of Fine Arts Museum, Shenyang China; and LOOP Barcelona Media Arts Festival. Perry was a panelist at Black Artists on Social Media at the Brooklyn Museum, NY. In 2014 Perry was Guest Lecturer at the School of Visual Arts, New York, for the course History, Theory, and Practice of the Image. Perry has participated in residencies at the Skowhegan School of Painting and Sculpture, Vermont Studio Center, Ox-bow, and the Experimental Television Center. Perry is currently based in Houston, Texas as part of the artist-in-residence program CORE at the Museum of Fine Arts, Houston.

JIMENA SARNO  is a multidisciplinary artist and organizer. She was born in Buenos Aires, Argentina and currently lives and works in Los Angeles, CA. She works across a range of media including installation, sound, video, text and sculpture. She is the organizer of analog dissident, a monthly discussion gathering that features work and work-in-progress by two invited artists. As an informal, open studio visit, analog dissident encourages intersectional approaches and is aimed at queer/radical/immigrant/politically inclined artists and thinkers to engage critically outside of traditional art institutions, school, gallery openings and most importantly, outside of social media; and resident alien, a free, short-term, project specific, need-based residency, for local and visiting underrepresented artists. Sarno holds an MFA from University of California, Irvine and a BFA from University of California, Los Angeles. She is a recipient of the 2015 California Community Foundation Fellowship for Visual Artists.

SUPPORT
Support for DISSENT: what they fear is the light is provided by the Metabolic Studio, a direct charitable activity of the Annenberg Foundation. Additional support is provided by Winnie Lam.