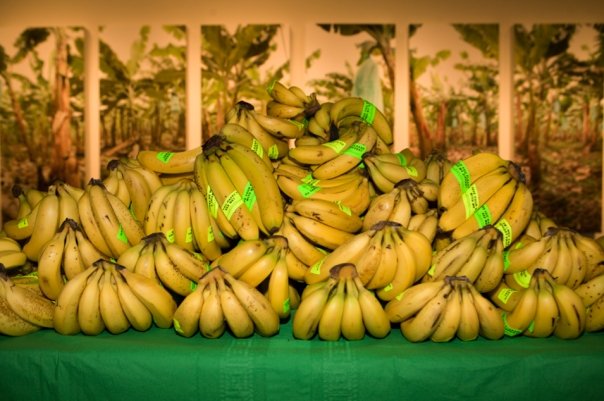 Author of the best-selling Banana: The Fate of the Fruit that Changed the World, Dan Koeppel discusses the controversial and often sinister history of the fruit. Adding to Fallen Fruit’s current exhibition on the banana, Koeppel talks about the unique nature of the fruit and the way in which this household staple has shaped the politics of Central and South America. He will focus particularly on the doomed Cavendish variety, which is the banana 95% of the entire world eats.  Visit www.bananabook.org.

FALLEN FRUIT: UNITED FRUIT
Currently on view at LACE, United Fruit premieres a new body of work generated during Fallen Fruit’s recent residency in Colombia, South America which features a series of photographs and video installations exploring the social, political and pop history of the banana.  As the most popular fruit in the world, the banana is ubiquitous in daily life — both as a food staple in grocery stores large and small as well as the supremely seductive fruit used in modern advertising and branding.  At the same time the banana’s history, politics and origins have remained virtually invisible due to the remoteness of where they are grown and of the people who grow them.

Fallen Fruit’s installation at LACE engages its subject in a range of bold and oblique strategies, signaling perhaps that no single history of the banana is possible.  The title for the exhibition, United Fruit comes from the United Fruit Company which exists today in a much reduced form as Chiquita Bananas.  More powerful than the Latin American countries it colonized, the corporation was marked by its ruthlessness and corruption, and its exploitation of workers, a turbulent history of protests and events that led to the infamous Banana Massacre of 1928 near the town of Ciénega, Colombia, which Fallen Fruit visited to create this work.  Burns, Viegener and Young chose to retain the title United Fruit for its hopeful and utopian echo, a contrast to its actual history.

The banana is a cultural symbol that has a powerful history of marketing and manipulation.  In addition to its examination of the social and political history of the banana, United Fruit also examines the playful place of the banana in pop culture as the central prop in suggestive jokes and naughty humor. As much as there is a prohibition against stating the obvious, the force of the banana as a phallic symbol cannot be ignored.

The projects included in the United Fruit exhibition are part of a new long-term work-in-progress entitled The Colonial History of Fruit, which juxtaposes two kinds of history: the broad or “objective” and the anecdotal or “subjective.” The next fruits to be examined are the kiwi and arctic berries.

ABOUT FALLEN FRUIT
Fallen Fruit is a collaboration between David Burns, Matias Viegener, and Austin Young.  Founded in 2004, their projects range from social practice (events, performances and public actions) to photography, video and installations.  Fallen Fruit deploys fruit in their work to examine social relationships, the environment, urban space and transnational capitalism.  Fruit in this sense is transhistorical and crosses all classes, ages and ethnic groups.  It is both ubiquitous and often invisible, yet it is also the food that appears most often in art. All of Fallen Fruit’s projects touch on, work through or work with fruit in some manner. They state that “fruit is the lens through which we look at the world.”
www.fallenfruit.org