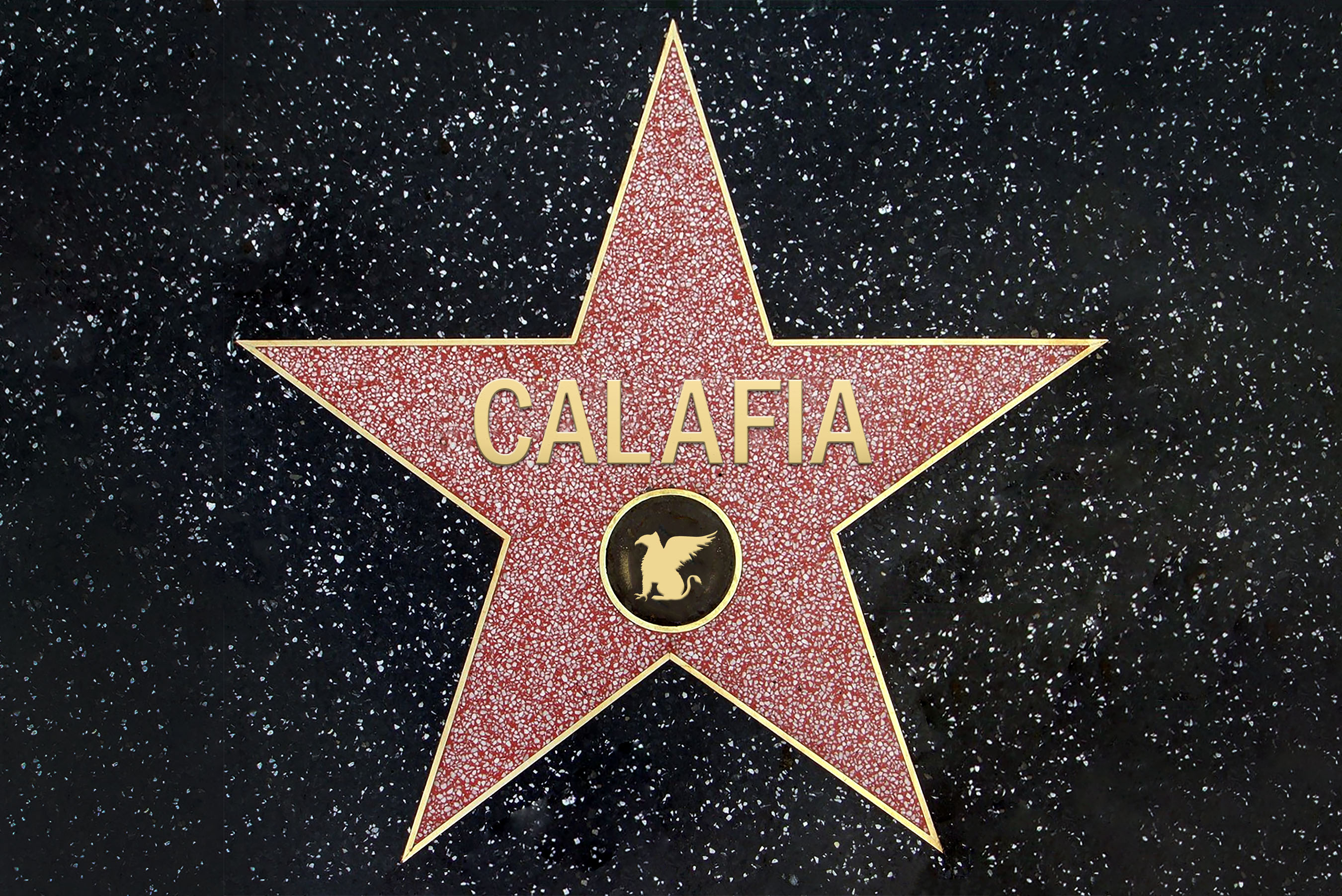 The MexiCali Biennial is proud to announce its inaugural event to kick off its upcoming round of programming. Join the us in celebrating the mythical origin story of California and its ruler, Queen Calafia. Serving under the concept of Calafia: Manifesting the Terrestrial Paradise, the weekend will consist of 9 new commissioned art and sound performances, DJ sets and a workshop. This initial performance-centered, two-day series hosted by LACE (Los Angeles Contemporary Exhibitions) in Hollywood on June 8 and 9, 2018 will be followed by exhibitions taking place at multiple venues across California and Mexico throughout 2018 and 2019. Artists include Edna Avalos, Artemisa Clark with Rebeca Hernandez, Cali (Claudia Algara), Dino Dinco, Dani Dodge, Carmina Escobar, Melanie Griffin, Kenyatta A.C. Hinkle, Haydeé Jimenez, Jason Magabo Perez, Slanguage Studios and #Snatch Power.
The MexiCali Biennial is a bi-national arts organization that explores the areas of California and Mexico as a unique site for aesthetic  production. The biennial showcases nomadic exhibitions that partner with institutions to showcase both emerging and established artists.

CALAFIA seeks to explore the spirit of California by using the great mythological black female warrior who is the namesake and ruler of the island of California, as a source of inspiration and artistic departure. In Garci Rodrigues de Montalvo’s fifth book of his sixteenth century opus Las Sergas de Esplandian (The Adventures of Esplandian), the story of the great queen Calafia and her army of Amazons is told with decided wonder that not only establishes her place as a powerful influence on California, a region which spans both sides of the U.S. and Mexico border, but also as a reflection of the ongoing history of the area. The story tells of the rich island of California and its powerful women, mythical beasts and the quest for greatness sets the foundation for the continuing mythos of its people and its land.

Artemisa Clark is a multidisciplinary artist and performance studies scholar from Los Angeles. She received a MA in performance studies from Northwestern University in 2016 and a MFA in visual arts from the University of California, San Diego in 2015. She has exhibited and presented research in spaces such as MOCA, The Hammer, the Mexican Consulate, the Vincent Price Art Museum, and Commonwealth & Council, all in Los Angeles; California Institute of the Arts, Valencia, CA; Angels Gate Cultural Center, San Pedro, CA; the Hemispheric Institute of Performance and Politics Encuentro X, Santiago, Chile; and SOMA, Mexico City.

Rebeca Hernandez is a dancer and choreographer born and raised in Mexicali, Mexico. She holds a MFA in Experimental Choreography from the University of California, Riverside. In 2012, she received the National Performance Network’s PAP Creative Exchange Award in partnership with the Los Angeles Department of Cultural Affairs. Hernandez danced and toured throughout Mexico with Taller de Danza Contemporánea de la Universidad Autónoma de Baja California and Compañía Jorge Domínguez. She has performed internationally at the Hemispheric Institute’s Encuentro (Santiago de Chile), twice as a soloist for the Festival de Improvisación (Mexico City), and in the Performática International Forum for Contemporary Dance and Movement (Puebla). Most recently, she re-performed Anna Maria Maiolino’s Solitário ou Paciência at MOCA Los Angeles and performed with Encounter for REDCAT’s Live Art LA/LA Festival, both part of the Getty Foundation’s Pacific Standard Time: LA/LA.

DINO DINCO is a performance art curator and maker, film and theater director, arts educator and writer. His work has been exhibited in solo exhibitions in Paris, Los Angeles, and San Francisco, and in group shows in London, Paris, Los Angeles, Santiago de Compostela, Antwerp, São Paulo, Guadalajara, Mexicali, Hamburg, New York, and Chihuahua. Dinco’s documentary film, Homeboy, explores the lives of gay Latino men who were gang members. His award-winning short film, El Abuelo, features queer Xicano San Antonio poet Joe Jiménez. Commissioned by the Fashion in Film Festival at Central Saint Martins College of Art and Design, the film premiered at the Tate Modern and has screened internationally. Dinco is writing a book manuscript on contemporary performance art in the major cities of the west coast of North America. His areas of research include experimentation with performance spectatorship and presentation through praxis, as well as the relationship between performance documentation and scholarship. Dinco is directing a live theatre production of The Homophobes: a clown show, written by queer Argentinian playwright, Susana Cook. The play will be presented at CounterPulse, San Francisco, October 2018.  Based in Tijuana, México, Dinco is also a Lecturer in the Visual Arts Department of UC San Diego. www.dinodinco.com

Dani Dodge uses unexpected sculptural materials to alter spaces.Her experience as an embedded journalist during the 2003 invasion of Iraq changed her forever. Since then, she has created art and installations that change and challenge expectations. From brightening a black and white snowy forest in Ireland with luminescent tree stumps to turning a Los Angeles gallery into a gauntlet of rotating car parts made from baby blankets, her works play with surrealist ideas using innovative forms. The installations merge the rational and the dream state. They often require interaction with the viewers. Dodge has created site-specific installations at the Coos Art Museum, Lancaster Museum of Art and History, New Museum Los Gatos, Inland Empire Museum of Art, Inglewood Public Library, San Diego International Airport, San Diego Art Institute and more. Dodge’s installation/performance CONFESS at 2015’s LA Pride was named one of the outstanding public art projects of the year by Americans for the Arts. The artist lives and works in Los Angeles. danidodge.com

Carmina Escobar, experimental vocalist, performer, improviser, sound and intermedia artist from Mexico City, living in Los Angeles.  Her work focuses primarily on the voice, the body and their interrelations to physical, social and memory spaces. www.carminaescobar.com

Melanie Griffin was born in Augusta, Georgia in 1981 and now lives in Los Angeles, California. She received a BA from Antioch College, where she studied Cultural Studies and Visual Arts. She has worked in many mediums including music, painting, drawing and collage. Currently, she is reflecting on what she believes is a false binary between art and craft. Through quilts, embroidery, other textile projects and an exploration of story, Melanie creates talismanic objects.

Kenyatta A.C. Hinkle is an interdisciplinary visual artist, writer and performer. Her practice fluctuates between collaborations and participatory projects with alternative gallery spaces within various communities to projects that are intimate and based upon her private experiences in relationship to historical events and contexts. A term that has become a mantra for her practice is the “Historical Present,” as she examines the residue of history and how it affects our contemporary world perspective.

Her artwork and experimental writing has been exhibited and performed at The Studio Museum in Harlem, Project Row Houses, The Hammer Museum, The Museum of Art at The University of New Hampshire, The Museum of the African Diaspora (MoAD) in San Francisco, The Made in LA 2012 Biennial and The BALTIC Centre for Contemporary Art, Newcastle upon Tyne, UK. www.kachstudio.com

Jason Magabo Perez’s interdisciplinary & multimedia body of work—a blend of poetry, prose, performance, film/video, ethnography, & oral history—relentlessly interrogates & experiments with art forms & practices while critically commenting on issues of race, gender, class, state violence, colonization, immigration, memory, & intimacy. Of central but not sole concern in Perez’s body of work is the haunting of U.S. v. Narciso and Perez (1977), a court case in which two Filipina migrant nurses, one of whom happens to be Perez’s mother, were framed by the FBI for murder, poisoning & conspiracy. Exploring this & many other personal & political narratives, Perez’s body of work, indebted to all things hip hop & deeply influenced by the best & worst of U.S. popular culture, serves as a humble invitation to students, families & communities to craft their own stories with a deep sense of urgency, social & ethical responsibility, & self-determination. www.jasonmagaboperez.com

Slanguage Founded in 2002 by Karla Diaz and Mario Ybarra, Jr., Slanguage is an artist group headquartered in Wilmington, California, a harbor area of Los Angeles.  Currently, members make artwork, curate exhibitions, coordinate events, and lead art-education workshops. A diverse group at various points in their careers, Slanguage includes teenagers, street artists, and established mid – to late career artists, the majority of whom live and work in the greater Los Angeles area, especially Wilmington. Slanguage bases their practice on a three-pronged approach to art-making to include education, community-building, and interactive exhibitions.  Focusing on art education, the collective has organized numerous artist residencies in museums across the United States and abroad. Fostering dialog about the meaning and value of contemporary art, Slanguage has used their studio space and resources to cultivate relationships between diverse artists, students, communities, and organizations. And, creating artworks that have ranged from multimedia installations to performances, public events, and workshops, the collective has enriched, inspired, and provoked viewers’ imaginations through local, national, and international exhibitions. slanguagestudio.com

Cali (Claudia Algara) was born in Tecate, Baja California, Mexico, in 1975. She studied and was a professional model at Glamor Agency and Models School, between 13 and 15 years of age (Tijuana, 1988-1990). She has a degree in Spanish Language and Literature (UABC, Tijuana, 1998). She has participated in national meetings of writers, (UNAM / UAS, Mazatlán, Sin., 1998, UNISON, Hermosillo, Son., 1999) and has been a member of the Nortec Collective (1999-2001). She has been a member of the Hemispheric Institute of Performance and Politics of the NYU (since 2003). She represented Mexican electronic art at ARCO Madrid 2005, together with Rafael Lozano-Hemmer, among other artists, Centro Cultural Conde Duque, Medialab Madrid. She is a Professor of contemporary art and performance at the Faculty of Arts, UABC, Tijuana, 2006-2012. Representative of poetry and new media in Mexico (‘Writing poetry in Mexico’, Bonobos, 2010). She has participated in different exhibitions in Mexico City, San Diego, Tijuana, Sao Paulo, Los Angeles and NY. In 2016 she decided to change her name Claudia Algara to Cali. Beneficiary of the Artistic Creation and Development Stimulus Program in Baja California, in the category of “Creators with a career”, 2017-2018.

Haydeé Jiménez is a transdisciplinary artist and entrepreneur based in Tijuana. As a producer/performer of experimental electronic music (aka Hidhawk / AyDD / Mundotheque / Tree Sap / Dagmar Midcap), Haydeé promotes fellow musicians and artists of the region through Borderland Noise – a community driven experimental electronic music series, tour and festival (Because We Love You Fest). She is currently co-directing Nett Nett, a studio-space for network approaches to cultural production. Haydeé is also co-developing Vibroacústica, a multi-sensory project that experiments with alternative approaches to relaxation, healing and aesthetic experiences through vibroacoustic sounds/music and frequencies.

Edna Naela Avalos Velazquez I am interested in generating crossings between contemporary ritualistic practices and performance, facing that imaginary within the creation of ceremonial rites or poetic actions bathed in symbolism that allow me to create connectivity of learning, balance, empathy and communion with the other. A primary but basic exercise to be able to connect with energies, knowledge and to face life from a political position based on healing, liberation through symbolic actions such as dance, the constant posing of questions, and the significance of my realities.

Special thanks to the Department of Art at California State University San Bernardino and Brewjeria Brewers.

Hollywood Walk of Fame TM is a trademark and intellectual property of Hollywood Chamber of Commerce. All Rights Reserved.