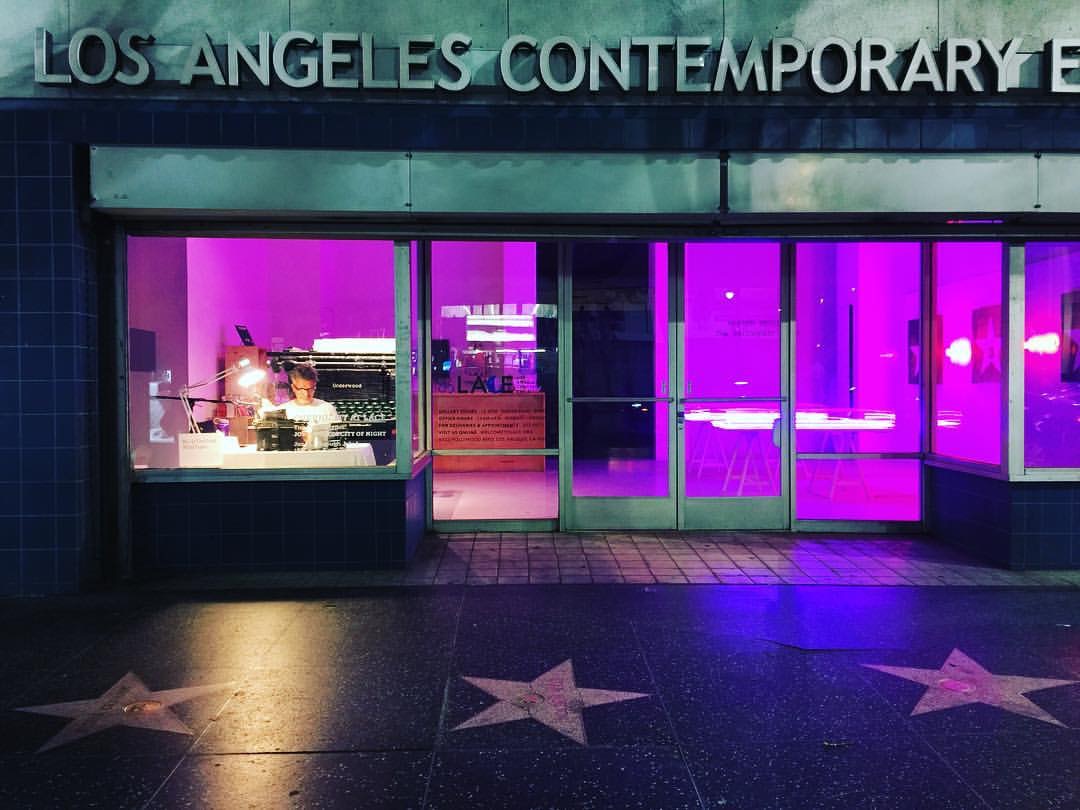 Tim Youd brings his 100 Novels Project to LACE with the retyping of two John Rechy novels.  These retyping performances will mark the 47th and 48th novels Youd has retyped in his ongoing multi-year performance series.

The 100 Novels Project is an extended and idiosyncratic literary pilgrimage. Youd journeys across the world retyping entire novels in locations germane to each story.  In these charged locations, he uses the original make and model of the typewriter employed by the book’s author.   During his multi-week performances, Youd retypes each novel onto a single sheet of paper backed by a second sheet.  He runs the doubled paper through the typewriter repeatedly, until every word of the novel has been retyped.  Upon completion the two pages – a positive and a negative image – are mounted as a diptych, representing two pages of a book.

Beginning on the evening of June 15 and running through July 1st, Youd will retype Rechy’s classic City of Night in the overnight hours 10pm to 3am in the storefront windows at LACE.  The sound of Youd’s typing will be amplified and played onto Hollywood Boulevard, a street that figures significantly into Rechy’s novel about the life of a male hustler.  Written over 50 years ago, City of Night was one of the first LGBT works to cross over into the main stream.  Rechy wrote the novel on a rented Underwood Model S.  He had grown so attached to the machine that instead of turning it back in, he bought it outright for $40, and still owns it today.  Accompanying the performance at LACE will be an exhibition of Youd’s large scale construction of Rechy’s typewriter.

A few years later – and using the same Underwood – Rechy wrote his next novel, Numbers.  Numbers is the story of a man’s obsessive quest for anonymous sex in and around Griffith Park.  Beginning on July 6th through July 15, Youd will be retyping this novel during the daytime hours 11am through 4pm at the Fern Dell entrance to Griffith Park.

The two diptychs will be installed as completed in the front gallery at LACE, and exhibited along with the oversized typewriter sculpture and a related painting through August 14.

Click here to read about Tim Youd in the LA Times

Click here to watch an interview with Tim Youd