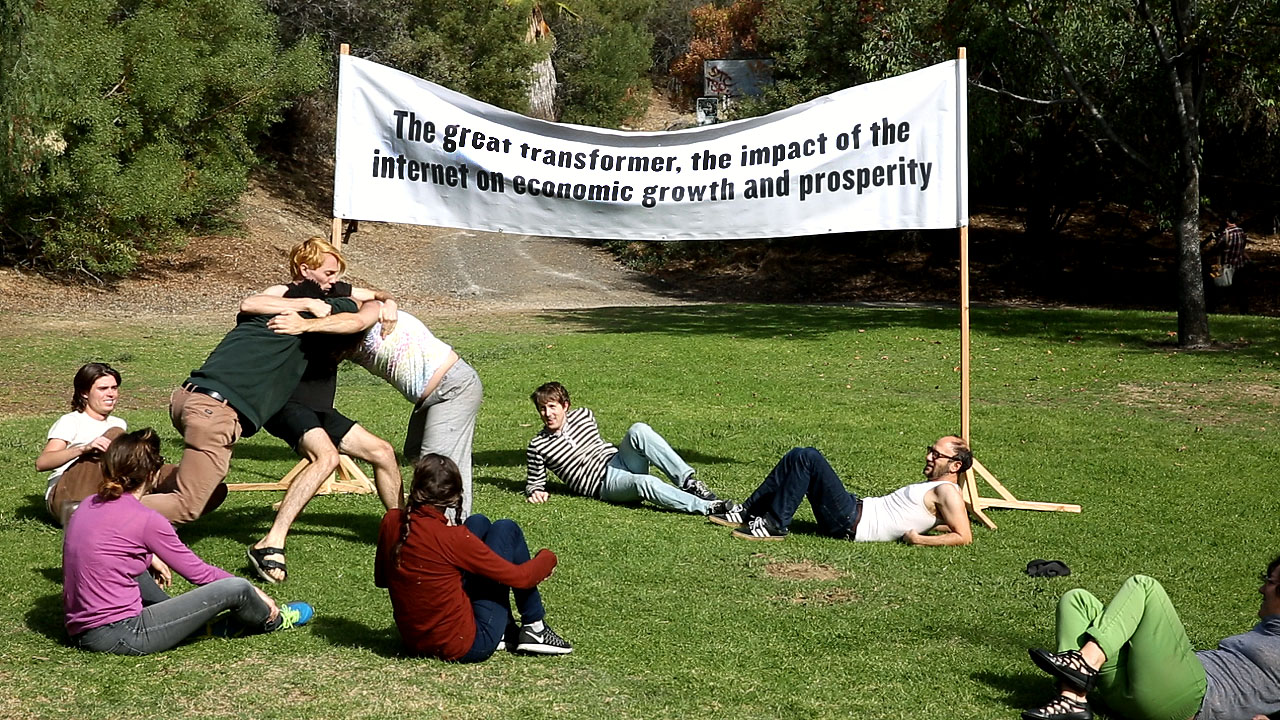 Photo: Robby Herbst’s  game “The Great Transformer, The Impact Of The Internet On Economic Growth And Prosperity,” as played in Los Angeles Elysian Park in 2017. Photo by Ian Byers-Gamber. Courtesy of Robby Herbst.

A celebration of Propositional Attitudes: What do we do now? Edited by John Burtle and Elana Mann. Published by Golden Spike Press, 2018

Performing One score for two people, by Emily Mast

Performing The great transformer: The impact of the internet on economic growth and prosperity, from the “New New Games” series, by Robby Herbst

Performing the matter of dreams (in color) a proposition for present and future dreamers, by Mariángeles Soto-Díaz

From the book’s introduction:
“This anthology reflects our process of deeply questioning our attitudes towards participation, and specifically how we participate in society. At a time when top U.S. government officials disregard the majority of the news as fake, actively suppress political protest, and attempt to upend democratic ideals, how do we engage in society as empowered citizens? As we work towards creating a world in which we want to live, we ask: What societal roles should we follow or break? What constitutes political dissent? And what are the ramifications of our decisions to comply or revolt?”

You are invited to ponder these questions and more, or just blow off some pre-election steam with an afternoon of performances, conversation, and propositions. The event will include four performances from the book, by various Los Angeles based artists, as well as an informal conversation with the editors. It also is rumored that Pigasus might even make an guest appearance, fifty years after he announced his bid for the presidency at the 1968 Democratic National Convention in Chicago.

About the book Propositional Attitudes: What do we do now? (2018: Golden Spike Press) edited by John Burtle and Elana Mann, is an anthology of recent performance scores, directions and instructions. The pieces in the book follow a long historical tradition of artists who blurred art and life through performance scores, directions, and instructions such as Pauline Oliveros, Lygia Clark, Allan Kaprow, ACT UP, Fluxus, the Diggers, Saul Alinsky, and many more.

The scores in the book are meant to be performed by anyone anywhere. Some of them are written for audience members; what is traditionally a passive role becomes one that is more self-aware or conscious. Various scores address the politics of listening—Who listens and who speaks? What is (not) being heard? Others are more goal-oriented, and operate directly as tools for social organizing. Some are theatrical critiques of historical or contemporary conflicts, while others focus on creating meaningful interpersonal exchange.

Davie-Blue is an actress with a degree in Performing Arts & Activism. She wrote her thesis on improvisation and imagination as methods for global community healing. She is the founder of Enchanted Children, an organization that uses dramatic play, mindfulness, art-making and non-violent conflict resolutions to teach and care for children in Southern California. She is an intersectional feminist, a human rights advocate, and a registered democrat — though she considers herself to be “so left she barely lingers within those boundaries.”

Elana Mann creates artwork that brings a greater consciousness to the listening and speaking we practice in everyday life. In 2017-18, she was named a Cultural Trailblazer by the City of Los Angeles and is a ceramics artist-in-residence at Pitzer College. Her solo exhibition “Instruments of Accountability” is up through December 8 at Pitzer College Art Galleries.

Emily Mast’s work pulls from a combination of practices—visual art, theater and dance—and is anchored in the production of multi-compositional projects that employ live performance, sculptural installation and video. With every project she gathers a micro-community of collaborators that she leads in a collective exploration of a given work’s subject matter in order to disrupt the artist-as-expert model and replace it with something more daring for everyone involved—all while working towards a refined artistic vision. She lives and works in Los Angeles.

John Burtle was born in Long Beach, California, in 1985. They like gardening, swimming, and making art with friends. Recent exhibits include Contacts with Paul Pescador at Lyeberry HQ, and A Performance About Everything, with Guan Rong at PAM. John is a member of Human Resources, Los Angeles.

Mariángeles Soto-Díaz began her art studies in Venezuela, currently one of the most violent countries in the world but then a promising oil-producing nation where Modernism’s failed promise was particularly poignant. Working in a range of formats, her practice registers the multiplicity of her own subject position, moving across conceptual borders to reframe the relationship between speculative spaces and politics through notions of affect. She is interested in creating objects, installations and events that examine how new feminist materialisms and the rifts caused by power differentials are understood.

Neha Choksi lives in Los Angeles and Mumbai.  Choksi works in multiple media, across disciplines and at times collaboratively and in unconventional settings and her work explores how we seek, experience and acknowledge losses and transformations in material, temporal and psychological terms.  “Frame our ears open” was originally commissioned for Live at Frieze London 2017.

Robby Herbst is an interdisciplinary artists from Los Angeles. His work engages critically with contemporary and historic models of participation. His 2016 project New New Games, supported by Bay Area arts Institutions Southern Exposure and the Headlands Center For the Arts, examined the history and influence of the 1970’s era New Games Movement with a publication, discussions, a reunion, and two games festivals.

Robert Lyons is a general contractor and the founder of a Lyons Design & Build, a construction company in Southern California. He is also a charity Auctioneer and MC and a member of The Rotary Club of Pasadena. Robert does not vote for religious reasons, but he does possess conservative values. He is a staunch believer in the Bill of Rights and is particularly passionate about the Second Amendment right to bear arms.

Sebastian Hernandez is an LA native and multi-disciplinary artist who received a B.A. in both Art Practice and Dance and Performance Studies from the University of California Berkeley in 2016. Hernandez employs a feminist theoretical analysis, queer theory, brownness and notions of collectivity as modes of thinking and generating works that shift and complicate Mexican and Chicano narratives in the contemporaneous social imagination. Their art making is influenced by an embedded connection to their indigenous Aztec/Mexica heritage and the history of the brown body in relation to the U.S.-Mexico borderland.

More info about book Propositional Attitudes: What do we do now?  here