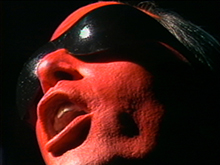 LACE is thrilled to host an evening of video screening to celebrate the recently released book Radical Light: Alternative Film and Video in the San Francisco Bay Area, 1945-2000.

By the mid-seventies, the concept of the artist’s body as medium had evolved from arid performance to effusive provocation. Tony Labat emerged in 1977 with the remarkable series Solo Flight in which the artist’s identity is given sudden form through subtle ethnic gestures. With pithy performances like Laurie Sings Iggy and the Madonna Series, Leslie Singer took on the celebrity industry with an economy of parodic impersonation and food flinging. In These Are the Rules, Doug Hall enacted an authoritarian pose to deflate the power vested in political symbols. Where Cecilia Dougherty dismisses the patrimony of past mentors with her remake of Howard Fried’sFuck You, Purdue, Jordan Biren reinstates The Body as a nervous engine of desire. Finally, Anne McGuire’s tortured evocation of psychic disarray, I Am Crazy and You’re Not Wrong, gives way to the frantic activation of domestic space in the HalfLifers’ highly caloric Actions in Action.

Radical Light: Alternative Film And Video In The San Francisco Bay Area, 1945-2000 is a rich compendium of essays, reminiscences and striking visuals that attests to the vital and varied experimental film and video scene that has existed in the Bay Area for more than half a century. Find out more about the book, tour, and other screenings at press.bampfa.berkeley.edu/radical/#foo

Your suggested donation of $10 at the door directly supports LACE in bringing the Radical Light artists, curators, and their work to Los Angeles for view.