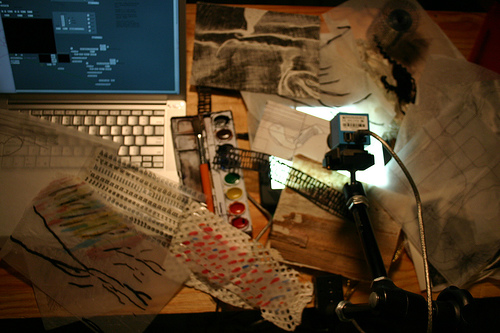 LACE and VOLUME present the Resonant Forms Festival for three days from April 3 through 5. The festival will present unique performances and installations by pioneers in the emergent fields of experimental electronic music, live cinema, and sound art.

While artists have been working at the crossroads of visual and sound arts for decades, recently this work has experienced a resurgence as technological developments have allowed greater fluidity across artistic media and genres. The artists featured in this festival represent varied approaches to the interplay of artistic mediums, and take risks not frequently observed in traditional creative modalities.

Currently, these artists, their work, and this nascent genre are not being promoted through visual or performing arts organizations in the United States. A goal of the festival is to also cultivate a deeper understanding and appreciation of this work through panel discussions and workshops, where lively dialogue between composer and audience is encouraged. Resonant Forms participates in the same cultural conversation as Mutek Festival (Montreal), Transmediale (Berlin), and Ars Electronica (Linz).

Tickets are available at LACE or online at www.welcometolace.org
*Capacity for Sheepwoman is limited, advance ticket purchase recommended
Festival schedule and performers subject to change.

Sheepwoman is a new live film by SUE-C. and Laetitia Sonami, inspired by Haruki Murakami’s two novels Dance, Dance, Dance and The Wild Sheep Chase. The two artists bring the film into existence by manipulating photographs, objects, drawings, videos, shadow theater and miniature lighting rigs. Sheepwoman interweaves dreams with reality. It engages the audience in witnessing the creation and dissolution of fleeting fantasies, blurring the boundaries of the cinema world and the real world.

Sheepwoman is made possible by The Multi-Arts Production Fund, a program of Creative Capital supported by the Rockefeller Foundation.

William Basinski is an American composer, clarinetist, saxophonist, and sound & video artist. A classically trained clarinetist, he studied jazz saxophone and composition at North Texas State University in the late 70’s. In 1978, inspired by minimalists such as Steve Reich and Brian Eno, he began developing his own vocabulary using tape loops and old reel to reel tape decks. He developed his meditative, melancholy style experimenting with short looped melodies played against themselves creating feedback loops.

His first release was Shortwavemusic. Although created in 1983, it was first released on vinyl in a small edition in 1998 by Carsten Nicolai’s Raster-Noton label. Throughout the 1980s, Basinski created a vast archive of experimental works using tape loop and delay systems, found sounds and shortwave radio static. In the 1990s he performed and produced records and intimate underground shows there for various New York artists including Antony, Diamanda Galás, Rasputina, The Murmurs, and his own ad-hoc experimental electronic/improv band, Life On Mars.

Celer is the stage name of husband and wife couple Will Thomas Long and Dani Baquet-Long. In Will and Dani’s time together, they have produced numerous custom, handmade self-releases, sound for installations and art exhibitions, as well as creating works for independent labels in North America, Japan, and Europe. They produce works of art that reflect the nature of love, family, and their concerns and interests, through a relative and absolute symposium of expression. They currently reside on the coast of Southern California.

He has collaborated with noted artists Taylor Deupree, William Basinski, COH, and Asmus Tietchens. Chartier’s sound works and sound installations have been presented internationally including the ICC (Tokyo, Japan), I Moderni at Castello di Rivoli (Torino, Italy), 2002 Whitney Biennial (NY), and the Art Institute of Chicago.

James Elaine is an artist, filmmaker, and curator living in Los Angeles. His films have been shown in festivals, museums and galleries around the world. Installations and films made in collaboration with composer William Basinski have been presented internationally. Their film, Variations, premiered at the Rotterdam International Film Festival. Elaine is currently the Hammer Projects Curator at the Hammer Museum in Los Angeles, and was the recipient of the 2008 Ordway Prize.

Kadet Kuhne is a media artist whose work includes video, installation and music composition. As an award-winning filmmaker she has numerous shorts that have screened worldwide including her film Infinite Delay, which premiered at the Sundance Film Festival. Her installations involve a combination of live processing and interactivity and explore themes of communication, control and confinement.

David Kwan is a sound and video artist who creates interdisciplinary works for exhibitions, installation and performance. He retools environmental and sensory phenomena into nascent and generative systems, wherein gradual transformative processes are set into motion and their resultant forms emerge over time. By reframing our surroundings and magnifying aspects of perception, he hopes to engage experiential aspects of listening and seeing, which is at the heart of his artistic endeavors.

Kwan has presented work at the Berkeley Art Museum, Pacific Film Archive, Kala Art Institute, Headlands Center for the Arts, Artist Television Access, The Lab, and Mission 17 in San Francisco; Jack Straw New Media Gallery in Seattle; Akademie Schloss Solitude and Baracke am Deustchen Theater in Germany. He holds a BA in Art Practice from UC Berkeley and an MFA in Electronic Music from Mills College, where he also taught in art, music and intermedia.

Lucky Dragons means any recorded or performed or installed or packaged or shared or suggested or imagined pieces made by Luke Fischbeck, Sarah Rara, and/or any sometimes collaborators who claim the name. Lucky Dragons are about the birthing of new and temporary creatures–equal-power situations in which audience members cooperate amongst themselves, building up fragile networks held together by such light things as skin contact, unfamiliar language, temporary logic, the spirit of celebration, and things that work but you don’t know why. There have been hundreds of these simple yet shifting and unpredictable instances–with audiences ranging from the intense intimacy of one person to the public spectacle of thousands of people. At the heart of it all is playing together–building up social collectivities, re-engaging the wonder and impossibility of technological presence.

Yann Novak is a sound artist, composer, designer and the creative director of Dragon’s Eye Recordings. His compositions have been published by Dragon’s Eye Recordings (US) and Infrequency (CA). He has performed at prestigious events and venues in the Pacific Northwest, including The Decibel Festival, and the Henry Art Gallery, among others. Internationally, he has performed at Mutek Festival (Montreal, QB), Blim (Vancouver, BC) and Legends (Manchester, UK). The versatile range of his work is also demonstrated by collaborations with visual artist Alex Schweder and with choreographer Crispin Spaeth. Through these collaborations, Novak’s work has been featured at The American Academy in Rome (Rome, Italy), the TBA Festival (Portland, OR), Western Bridge (Seattle, WA), Howard House (Seattle, WA), and Suyama Space (Seattle, WA).

Adam Overton is a living composer and performer of experimental music and action, a teacher of performance & multimedia, and a certified massage therapist based in Los Angeles. Through experiments in rhythm, presence, and contact, his work plumbs the depths and abilities of the bodymindperson, and playfully maps the intimate distance between individuals. A fascination with the practices and challenges of awareness, acknowledgment, and [co]existence are currently fueling many of his investigations.

SUE.C is a visual and performing artist based in the San Francisco Bay Area. Her works challenge the norms of photography, video, and technology by blending them all into an organic and improvisational live performance setting. Employing a variety of digital tools to create an experimental animation “instrument,” Slagle synthesizes cinema from photographs, drawings, watercolors, hand-made papers, fabrics and miniature interactive lighting effects. Dark, moody, textural, and physical, her live films inherit equally from the kinetic languages of Stan Brakhage’s abstract cinema and Nicolas Schöffer’s lumodynamic scuptures. She employs the same techniques in her recorded work to emphasize the beauty of the banal street corner, public parking lot, forgotten winter beach, torn remnant of a found photograph, cast-away super 8 vacation footage, and other half-forgotten, often-unnoticed, in-between spaces in her surroundings.

Laetitia Sonami combines text, music and found sounds from the world, in compositions that have been described as “performance novels”. Her signature instrument, the Lady’s Glove, tracks the slightest motion of her fingers, hand and arms: through its use, Sonami can create performances where those tiny movements shape the music and environment. Her sound installations combine audio and kinetic elements embedded in ubiquitous objects such as light bulbs, rubber gloves, bags, and more recently toilet plungers (“Sounds of War”).

Sonami has been performing in numerous festivals across the United States, Canada, Europe, Japan and China, among which the Arts Electronica Festival in Linz, the Bourges Music Festival in France, the Sonambiente Festival in Berlin, the Interlink festival in Japan, Ban-on-a-Can, the Kitchen and Other Minds, S.F. Awards include the Alpert Award in the Arts (2002), Foundation for Contemporary Performance Arts Award (2000), the Civitella Ranieri Fellowship (2000), and a Creative Work Fund award (2000) for a collaboration with Nick Bertoni and the Tinkers Workshop (“BAGS”).

Mark Trayle works in a variety of media including live electronic music, installations, improvisation and compositions for wireless chamber ensembles. He uses re-engineered consumer products and cultural artifacts as interfaces for electronic music performances and networked media installations. In recent pieces for chamber ensembles he places performers in an interactive network where composers, performers and technology cooperate to form the music.

Trayle has performed and exhibited at experimental music and new media venues and festivals in the U.S., Canada and Europe, including New Langton Arts (San Francisco, 1985 and 1989), LACE (Los Angeles, 1989), Experimental Intermedia Foundation and The Kitchen (New York City, 1988 and 1989), Het Apollohuis (Eindhoven, Netherlands, 1993), the Centro d’Arte (Padova, Italy, 1995), Metrònom (Barcelona, 2000) and Mex (Dortmund, 2001). He is currently Co-Chair of the composition program at the California Institute of the Arts.

Christopher Willits has been instrumental in redefining the guitar in the digital age. Using custom-built software, Willits morphs his guitar playing into warm folded rhythms of texture and melody. Named “the center cell of a complex indie rock-avant-garde-electronic art Venn diagram in the Bay Area” (San Francisco Bay Guardian), and “The Picasso of Sound” (Tokafi Magazine), Willits defies genre distinctions while still defining a sound of his own. His guitar lines fold and weave into each other creating complex patterns of interlocking rhythm, melody, and texture.

Willits completed his Master’s Degree in Electronic Music at Mills College where he studied with Pauline Oliveros and Fred Frith. Willits recent collaborators include Scott Pagano, Taylor Deupree, and Ryuichi Sakamoto. Willits’ numerous releases and collaborative projects cover a broad spectrum of musical styles, and include one main commonality: Willits’ unique approach to the guitar and sound.

LACE both champions and challenges the art of our time by fostering artists who innovate, explore, and risk.  We move within and beyond our four walls to provide opportunities for diverse publics to engage deeply with contemporary art.  In doing so, we further dialogue and participation between and among artists and those audiences.

VOLUME functions as a catalyst for interdisciplinary new media  work through exhibitions, performances, events, lectures, and publications. Concentrating on the nexus of music and visual arts practices ranging from the avant-garde to popular culture, VOLUME offers unique opportunities for artists to create and present hybrid works.