SOC(i)AL: How Does Socially Engaged Art Happen in Los Angeles? 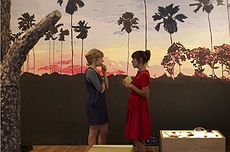 This free workshop will take place at LACE, alongside the current exhibition (Re-) Cycles of Paradise, an international exhibition which explores the complex relationship between gender and climate change, featuring works by Kim Abeles, Melodie Mousset with Zachary Sharrin, Roman Signer, and many others. Read more on the exhibition here.

The participants will break into work groups based around the following topics:

Each topic is inspired by a chapter of Pablo Helguera’s Education for Socially Engaged Art: A Materials and Techniques Handbook. Click here to preview or purchase the publication online via amazon.

ABOUT THE SERIES
Say passé to the sculpture in the square; the leading edge of public art is changing. Art is passing from isolation to intervention, to participation, to engagement, to integration.

SOC(i)AL: ART + PEOPLE is a free, public series of roundtable discussions and weekend events that explores socially engaged art in Southern California from East to West. Join the dialogue with SoCal artists, scholars, activists, and administrators as we think about socially engaged art in relation to zoning, technology, ethics, food, ritual, performance, gentrification, museums, democracy, nature and art support structures in the here-and-now.   Where is our collective dialogic imagination now?

The series of individually produced events takes place at venues across L.A. Led by Anne Bray of LA Freewaves in partnership with ForYourArt and KCET’s Artbound, each event will be summarized by a different writer in post, including audio recordings to be posted on the KCET site.

ABOUT THE PARTICIPANTS
Kim Abeles installations and community projects cross disciplines and media to explore broad social issues. Her work brings together biography, geography and environment. She has created artwork in conjunction with a unique range of collaborators such as the Bureau of Automotive Repair, Santa Monica Bay Restoration Project, California Science Center, Natural History museums in California and Colorado, and the Lakota Indians of South Dakota. In 1987, she innovated a method to create images from the smog in the air, and Smog Collectors brought her work to national and international attention. Kim Abeles: Encyclopedia Persona A-Z toured the United States and South America, sponsored by the United States Information Agency. She has exhibited in twenty-two countries, including large-scale installations in Vietnam, Thailand, Czech Republic, England, China and recently in South Korea. Her work is in numerous private and public collections including MOCA, California African American Museum, LACMA, and is archived in the library collections of the MoMA and the Cooper-Hewitt Publication Design Collection of the Smithsonian. Abeles’ journals, artists books and process documents are archived at the Center for Art + Environment, Nevada Museum of Art, Reno, Nevada.

Raquel Gutiérrez is a performance writer, playwright, and cultural organizer who cut her teeth on Los Angeles performance art when she interned and house managed at HighwaysPerformance Space in 2000. She has studied in university settings and performed in a variety of locations, including the Salvadoran countryside, cabarets, galleries, San Antonio, universities, Pico-Union and Macarthur Park. In 2001, Gutiérrez was one of the co-founding members of the performance ensemble, Butchlalis de Panochtitlan (BdP), a community-based and activist-minded group aimed at creating a visual vernacular around queer Latinidad in Los Angeles. She is the Manager of Community Partnerships at Cornerstone Theater Company. Read her blog at raquefella.blogspot.com

Emily Hopkins is an artist and the executive director of Side Street Projects, an entirely mobile and sustainable community art center that teaches artists of all ages how to roll up their sleeves and do things themselves within a contemporary arts context. Side Street Projects is often referred to as a functioning piece of public art. Emily works to develop sustainable, community-based systems that connect working artists directly to communities. She is committed to hands-on, standards-based art programs for K-12 that appeal to multiple intelligences and incorporate into core curriculum. She serves on 3 art advisory committees for the local school district. Emily holds a BFA in fine arts from CalArts with a focus on writing. More on Side Street at sidestreet.org

Amanda Mears is an artist exploring her own socially-engaged practice; work she sees as an extension and deepening of her work as a documentary-maker. Before Amanda decided to focus full-time on her art practice, she filmed and directed hundreds of hours of factual television for the BBC, Discovery Channel, History Channel and many others. She was trained in film-making at the BBC in England and by the American Film Institute (AFI) in Los Angeles. The short film Amanda made at AFI was awarded BEST STUDENT FILM – California Independent Film Festival, SELECTED WORK JURY AWARD  – JVC Tokyo Video Festival, INVITED WORK – Tokyo Short Film Festival and Official Selection – Methodfest, LA, & LA International Short Film Fest. Amanda has recently reconnected with her love of documentary and the moving image by creating short films about the artists and their work at LACE gallery, Hollywood. She is also involved in a collaboration with sound installation artist Staalplaat Soundsystem and Cinechamber to translate and adapt their site-specific audio installation Composed Nature into a new multimedia experience.

Carol A. Stakenas is the Executive Director of LACE (Los Angeles Contemporary Exhibitions).  LACE supports and exhibits a broad range of arts such as visual art, performance art, video, community interaction, publishing, and more. The organization moves within and beyond its four walls to provide opportunities for diverse audiences to engage deeply with contemporary art. She was the lead curator for Los Angeles Goes Live: Performance Art in Southern California 1970-1983, an exhibition, performance series and publication project as part of the Getty’s Pacific Standard Time initiative. The performance series featured re-inventions of historical performances and actions staged throughout the city. Most recently, she produced Suzanne Lacy’s public art work Three Weeks in January: End Rape in Los Angeles, a work that engaged activism, education, media, city politics and art with participants from all of these areas.

Aandrea Stang is an independent curator, producer, educator and writer.  From 2002 until 2012 she served as Senior Education Program Manager at The Museum of Contemporary Art, Los Angeles (MOCA) where she was responsible for the museum’s public programming.  While there she developed and produced special programming for exhibitions such as WACK! Art and the Feminist Revolution (2007); William Leavitt: Theater Objects (2011) and Under the Big Black Sun: California Art 1974-1981 (2011).  Ms. Stang was responsible for MOCA’s collaborative reinventions of Allan Kaprow’s Happenings in conjunction with the museum’s presentation of Allan Kaprow — Art as Life (2008). From 2008 to 2012 she oversaw MOCA’s Engagement Party program which offered Southern California–based artist collectives and collaboratives an opportunity to make new artworks, interacting with and exploring MOCA and its resources in unexpected ways. Prior to her work at MOCA, Ms. Stang held positions at local government and community-based arts organizations.  She has served as adjunct faculty for USC’s Public Art Studies Program and Occidental College’s Department of Art History and Visual Art.  In 2009 she co-organized the exhibition Not Los Angeles for the Fellows of Contemporary Art and in 2012 served as co-curator for Baker’s Dozen IV at the Torrance Art Museum.