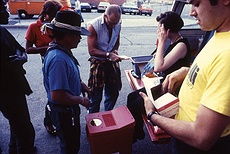 Gather at WUHO for a conversation led by Dont Rhine with Shoshanna Scholar, current Clean Needles Now Executive Director, and AIDS activists, artists and members of the needle exchange past and present.

Clean Needles Now was an artist-run project that came out of Act UP. Dont Rhine, Shoshanna Scholar, and past and present members and activists of the needle exchange will talk about the beginning of the organization and trace it through to the present, with a focus on the role of artists and the neighborhood of Hollywood.

As an organization invested deeply in its neighborhood of Hollywood and the artists and activists of the needle exchange, LACE is proud to present this conversation.

Following the discussion, Dont and Shoshanna will lead the group to visit the needles exchange site just around the corner.

Read the related feature in current issue of X-TRA. More on X-TRA at x-traonline.org

Shoshanna Scholar has served as the Executive Director of Clean Needles Now / Los Angeles Community Health Outreach Project since 2003. The organizations aim to support the rights and responsibilities of those affected by drug use to protect their health and the health of their communities. Scholar is an outspoken advocate for the rights of drug users who has worked tirelessly to raise awareness of the issues facing people who use drug on the local, state, and national level.

Dont Rhine has been involved in HIV/AIDS organizing since 1989. He co-founded the international sound art collective Ultra-red in 1994. Dont also teaches in the low-residency Visual Art MFA program at Vermont College of Fine Arts.