Give Now
You are here: Home / LACE / Exhibition / Paroxysm of Sublime 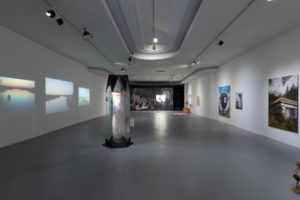 There is a clear sense of urgency that is both rising and collective. It seems to be a matter of dis-ease, as philosopher Glenn Albrecht puts it. His diagnosis for our times is that of solastalgia—an illness at once psycho and somatic—affecting humanity at large, caused by a changing, once-familiar environment, whose fate seems beyond our control. Home becomes first uncanny, then hostile, like a nightmare in which one’s mother morphs into a stranger, then an enemy.

The title of this exhibition, quoting a poem by sculptor Sara Favriau, emphasizes the unfolding of changes, leading to a paroxysm often followed by a drastic transformation. Directly referencing the overwhelmingness of the sublime as defined by Kant, the exhibition draws from the history and present of philosophy. To take on the concept of solastalgia, we need to question our definitions of “home” and “environment”. The notion of environment can also denote some kind of separation, the control and domination of mankind over its habitat. In Los Angeles, the majority of the city’s plant life was brought by settlers to “imparadise” the land and recreate familiar environments, or otherwise introduced to the region to reflect, instill, and develop desire and fantasy, dramatically changing the ecosystem and shaping its visual identity. Solastalgia is a feeling of homesickness while being at home, in a ”natural” environment constructed by human presence, perpetually in rapid transformation. This dystopian element of the city points to the question of colonization by nature, all the more insidious for its “natural” disguise.

This exhibition brings together reflections on our shared pathology and pathos. If a sense of dread, fear, and grief is palpable, then so is the desire to act. These reactions are brought into the light, so that we might collectively face what we must collectively correct. In catastrophe, affect becomes not an ending, but a hinge to incite evolution in our relationship to the environment, to loss, and the passing of time, sometimes romanticized or fantasized. The blending of timelines and cartographies works towards a more nuanced view of past, present, and impending change, to ritual and symbiosis as methods of healing. This confluence of time and space encourages the reconsideration of other paradigms — nature/culture, pre/post apocalypse, native/foreign.

The exhibition will examine the effects of solastalgia, its relationship with the history of Western philosophy, its broader significance in multiple temporalities and geographies, and a search for remedies outside of a Western paradigm. Doing so requires various voices, “a rush of stories”, to quote Anna Tsing: “To listen and to tell a rush of stories is a method. And why not make the strong claim and call it a science, an addition to knowledge? Its research object is contaminated diversity; its unit of analysis is the indeterminate encounter (…) A rush of stories cannot be neatly summed up. Its scales do not nest neatly; they draw attention to interrupting geographies and tempos. These interruptions elicit more stories. This is the rush of stories’ power as a science.”

An archive of various textual references and other objects for storing knowledge offered by the curators and artists, including tinctures by Candice Lin, will be presented in various forms throughout the exhibition. iris yirei hu has collaborated with Andrew Freire to conceive a structure that will be a platform for this collection of knowledge and histories. The materiality of the library is itself a partial archive of LACE’s exhibition history and will highlight the infrastructural support (in knowledge, labor and materials) that are required to realize an exhibition.

This project was part of the publication Solidarity Offerings: Three Curatorial Approaches to Ecocritical Art, which can be read for free through the link.