The artists approach processes of cultural erasure through visual strategies that document fainting, magnifying the details to revive a death ocean, myths, languages, and people’s histories. The diverse strategies that Vicuña, Ehlers, Haq and Hopinka weave in the films are spiritual and rebellious, outside and against western aesthetics.

Location: At the Spielberg Theatre at the Egyptian, 6712 Hollywood Blvd, Los Angeles, CA 90028

Tickets: $10 general; $6 students (with ID)/seniors; free for Filmforum and LACE Members. Tickets available in advance from Brown Paper or at the door.

(Re)collections
by Arshia Haq
USA, 2005. color, sound, 19:23 min
A film about the intersections of personal and historical memory, collecting and archives, and the death of a language. 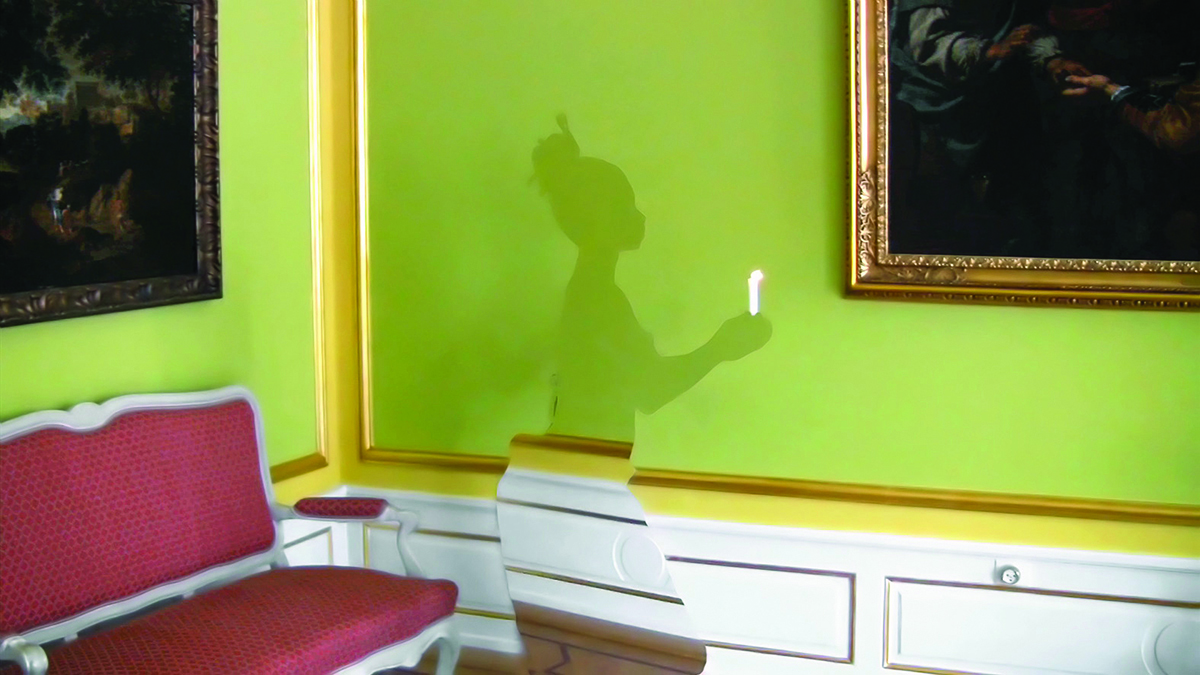 Black Magic at the White House revolves around Marienborg, a county within Sorgenfri, north of Copenhagen, today serving as the official residence of the Danish Prime Minister. Marienborg was originally built in the 18th century as a summer residence by Olfert Fas Fischer, naval officer and director of the large trading company Asiatisk Kompagni.

Black Magic at the White House ties Marienborg’s present function as the place from which the Prime Minister’s New Year’s speech is transmitted and international heads of state are received to its less known past. Over the years, some of its owners possessed fortunes than can partly be attributed to the running of plantations in the Danish West Indies, and enslaved Africans are believed to have lived at Marienborg for a while.

In the video, Jeannette Ehlers dances like a ghost through the grand halls of Marienborg. She wiggles, kisses the floor and performs a so-called vévé – a vodou ritual in which the priest draws certain patterns on the ground in the hope of invoking the gods of health, reconciliation, and protection against evil spirits.

Told through recollections of youth, learning, lore, and departure, this is an imagined myth for the Xąwįska, or the Indian Pipe Plant – used by the Ho-Chunk to revive those who have fainted.

In this documentary poem, Cecilia Vicuña returns to Con Con, the birthplace of her art in Chile, where the sea is dying and an ancient tradition is being destroyed.

Con Con is located at the mouth of the Aconcagua River whose source is the glacier of Aconcagua, the tallest mountain the Western Hemisphere. Named for the oldest deity of the Andes, the god Kon, it may have been a sacred oracle site for millennia, associated with the most renowned oracle site in the Americas: Pachacamac, located on the coast of Peru.

The word Con (Kon) alludes to the sanctity of the cycle of water – from glacier to ocean to cloud – a circularity intensified by the repetition: Con Con.  In the sacred Valle del Aconcagua, the “bailes chinos” created a powerful mystical sound: the “sonido rajado” (torn sound), a multiphonic music of the pre-Columbian Andres.  Based on dissonance, the “bailes chinos” are rital dances dedicated to increasing the life-fornce.  Continuously performed throughout colonial times, the dance is now dying along with the sea.

Exploring the forgotten meaning of the ancient names, the artist recovers an erased cultural memory.  In this hybrid work, part poem, part documentary, Cecilia Vicuña creates new bridges between the ancestral and the avant-garde.”

Jeannette Ehlers is a Copenhagen-based artist of Danish and Trinidadian descent whose practice takes shape experimentally across photography, video, installation, sculpture and performance. She graduated from The Royal Danish Academy of Fine Arts in 2006.

Ehlers’ work often makes use of self-representation and image manipulation to bring about decolonial hauntings and disruptions. These manifestations attend to the material and affective afterlives of Denmark’s colonial impact in the Caribbean and participation in the Transatlantic Slave Trade—realities that have all too often been rendered forgettable by dominant history-writing. In the words of author Lesley-Ann Brown, “Ehlers reminds all who participate in or gaze at her work that history is not in the past.” Ehlers insists on the possibility for empowerment and healing in her art, honoring legacies of resistance in the African diaspora. She merges the historical, the collective and the rebellious with the familial, the bodily and the poetic. On 31 March 2018 she unveiled I Am Queen Mary, a public sculpture project in collaboration with La Vaughn Belle, KAS, Cph, DK. Ehlers has exhibited at The Finnish Museum of Photography, Helsinki, FI, Canton Gallery, Guangzhou, CN, CareOf, Milan IT, Frost Art Museum, Miami, US, CAMP, Copenhagen, DK, Wallach Art Gallery, NYC,USA, AROS, Aarhus, DK, MOLAA, Los Angeles, USA, The Black Diamond, Copenhagen, Denmark, International Slavery Museum, Liverpool, UK, 21c Museum Hotels, Louisville, Kentucky, US, Reykjavik Art Museum, IS.

Arshia Fatima Haq works across various mediums, including film, visual art, performance and sound and is currently exploring themes of embodiment and mysticism particularly within the Islamic Sufi context. She is the founder of Discostan, a collaborative decolonial project working with cultural production from the Middle East, North Africa and South Asia. Narrative threads include migration, celebration, warfare, nostalgia, homeland, and borders, often within realms of Islamic influence, through lenses of traditional forms and kaleidoscopic reinventions of pop culture.

Haq’s work has been featured at the Broad Museum, Toronto International Film Festival, MOMA New York, Hammer Museum, LAX Art, UC Irvine’s Global Visions Program, Centre Georges Pompidou, and the Pacific Film Archive, and she was selected as a cultural programmer for the Los Angeles Islam Arts Initiative. She is a recipient of the California Community Foundation Visual Artist Fellowship, the Rema Hort Mann Emerging Artist Grant, the Onassis Foundation’s Artist In Residence Grant, and the AIR New Voices Scholarship. Currently, she hosts and produces monthly radio shows on Dublab and NTS featuring contemporary, traditional, and nostalgic music from across the SWANA region, and she recently released an album of Sufi field recordings from Pakistan on the Sublime Frequencies label.

Sky Hopinka (Ho-Chunk/Pechanga)  was born and raised in Ferndale, Washington and spent several years in Palm Springs and Riverside, California, Portland, Oregon, Milwaukee, WI, and is currently based out of Cambridge, Massachusetts.  In Portland, he studied and taught chinuk wawa, a language indigenous to the Lower Columbia River Basin. His video work centers around personal positions of Indigenous homeland and landscape, designs of language as containers of culture, and the play between the known and the unknowable.  He received his BA from Portland State University in Liberal Arts and his MFA in Film, Video, Animation, and New Genres from the University of Wisconsin-Milwaukee. He is currently a fellow at the Radcliffe Institute for Advanced Study at Harvard University and Sundance Art of Nonfiction Fellow for 2019.

Cecilia Vicuña is a poet, artist, filmmaker and activist. Her work addresses pressing concerns of the modern world, including ecological destruction, human rights, and cultural homogenization. Born and raised in Santiago de Chile, she has been in exile since the early 1970s, after the military coup against elected president Salvador Allende. Vicuña began creating “precarious works” and  quipus in the mid 1960s in Chile, as a way of “hearing an ancient silence waiting to be heard.” Her multi-dimensional works begin as a poem, an image that morphs into a film, a song, a sculpture, or a collective performance. These ephemeral, site-specific installations in nature, streets, and museums combine ritual and assemblage. She calls this impermanent, participatory work “lo precario” (the precarious): transformative acts that bridge the gap between art and life, the ancestral and the avant-garde. Her paintings of early 1970s de-colonized the art of the conquerors and the “saints” inherited from the Catholic Church, to create irreverent images of the heroes of the revolution.