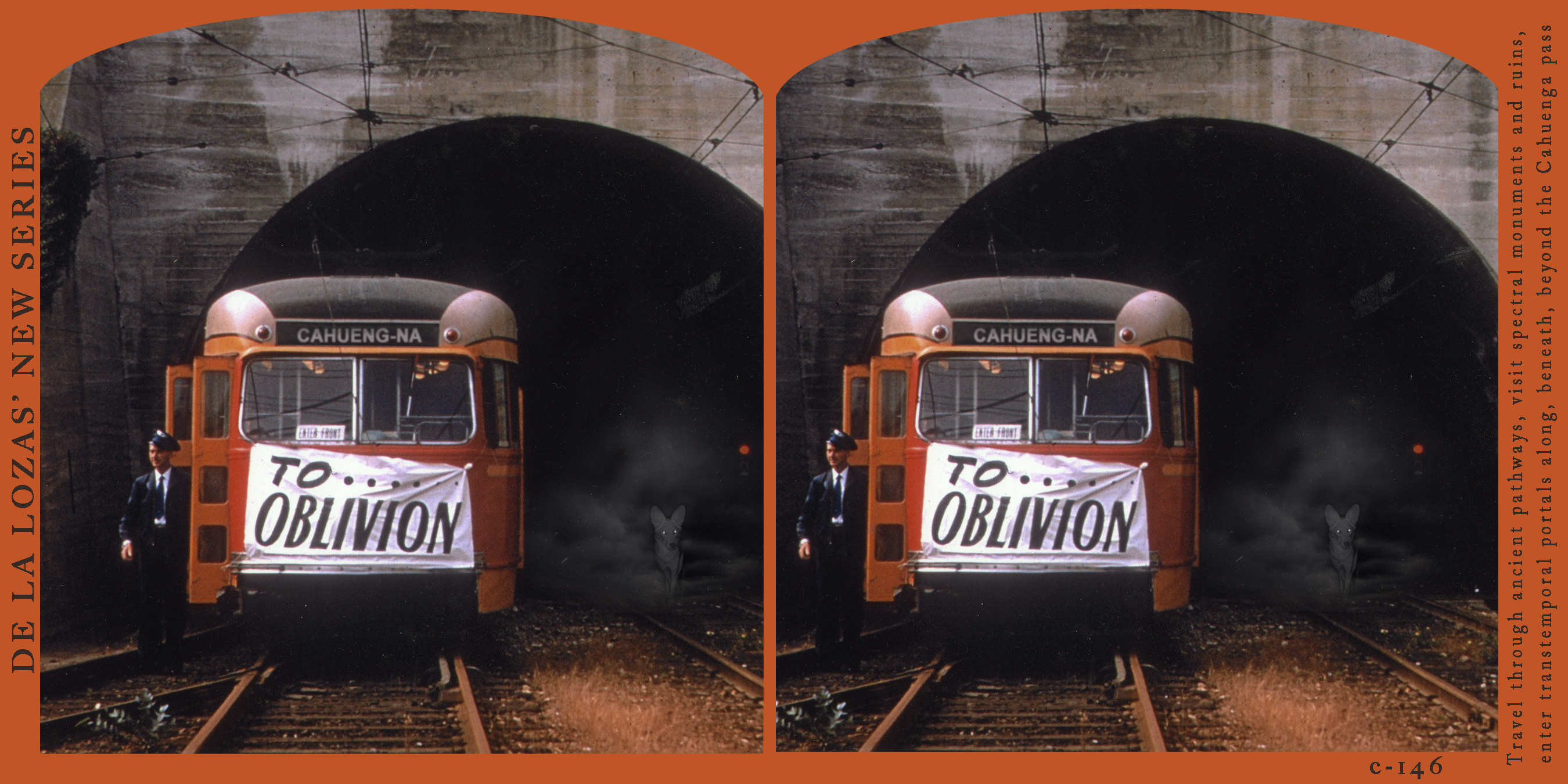 Image Courtesy of the artist.

In To Oblivion: The Speculator’s Eden, de la Loza creates a portal inside LACE’s main gallery to transport us into a “disturbance zone,” a ghostly and haunted space that unveils fragmented stories of this land we call Los Angeles. In excavating the past, unsettling glimpses of the city of the future surface via an immersive installation comprised of an archive of shadows, dematerialized artifacts, performative poems, and spectral ruins and stereoscopes.

De la Loza’s installation is based on long term research that investigates the history of transportation infrastructure and its impact on past, present, and future landscapes. Centered around the Los Angeles transit system, the artist evokes the final ride of a Pacific Electric car in 1955, which carried a banner reading “To Oblivion” before the entire system was dismantled and supplanted by a new freeway structure during the postwar era. It was a moment of dramatic change to the Los Angeles landscape and an exacerbation of the struggles of working-class communities.

The latest iteration of this ongoing project, To Oblivion: The Speculators’ Eden uncovers forgotten strata in and around the Cahuenga Pass, a path that now connects Hollywood to the San Fernando Valley, via the 101 Route, Hollywood Freeway. This thoroughfare has an extensive history as a former early 20th-century streetcar line, a segment of the Camino Real, the main route Spanish settlers traversed, an ancestral way for indigenous groups pre-settlers, a trail for coyotes and other animals, and a waterway for native plants. The early development of Hollywood aligns with our contemporary moment, where rapid development and massive displacement have wreaked havoc on the neighborhood. The speculators of a supposed Eden (Los Angeles and Hollywood) is/was a project of massive construction and imagination imposed on a city without consideration of what it was, leading to a violent erasure ignorant of the land and its inhabitants.

In contemplating pathways, undercurrents, and the scale and scope of transit-oriented development’s impact on the land, de la Loza loops the violence of the past into the present, which hauntingly echoes among the cranescape of Hollywood today in the midst of the latest iteration of a development frenzy.

The exhibition includes a selection of films curated by Penelope Uribe-Abee.

This exhibition includes a collaboration with the Summer Youth Program of LA Rooted a transformative educational organization dedicated to ancestral wisdom and environmental stewardship, community advocacy, self-care, and food justice.

Support for this exhibition is provided by The Andy Warhol Foundation for the Visual Arts, the California Arts Council, and the Department of Cultural Affairs, City of Los Angeles.

Sandra de la Loza is an artist who creates open-ended, research-based frameworks that guide inquiries that include visual, experimental, social and pedagogical components. Working as a performative archivist, she moves critically from and in between the institutional and the social occupying a variety of sites to interrogate underlying power dynamics and knowledge production through history and memory. She considers her efforts to co-generate autonomous spaces for artistic production, community action and critical dialogue that center the voices and history of people of color an important part of her practice. Such efforts have resulted in participating in collectively run community centers, pedagogical spaces, and multi-disciplinary events such as the Aztlan Cultural Arts Foundation (1993-1998), the October Surprise (2004), Arts in Action (2000-2004), Decolonize LA (2016-2017) and at land’s edge (2016-2018). Current exhibits include A Grammar Made of Rocks at Human Resources and a recent collaboration with Argentinian artist Eduardo Molinari, currently on view at the School of the Art Institute of Chicago in Talking to Action: Art, Activism, Pedagogy of the Americas. Her work has been exhibited in major museums, alternative art spaces and community centers within the United States, Latin America and Europe. She has received awards from Art Matters, the City of Los Angeles, the Center for Community Innovation, the California Community Foundation, and the Los Angeles County Arts Commission.