Give Now
You are here: Home / LACE / Exhibition / SOUND OFF: Silence + Resistance 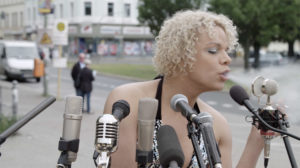 2020’s Emerging Curator Exhibition engages silence as a tool of resistance. The exhibition, SOUND OFF: Silence + Resistance, fifth in the Emerging Curators series, opens in January 2020 Interdisciplinary artist Abigail Raphael Collins, selected by jury, explores silence as an expression of political resistance. Works by artists and activists engage silence as a way to honor the inarticulable, defy demands of production, prioritize deep listening, and refuse to incriminate. Rather than negating the importance of speaking up, speaking truth to power, or raising our voices, this exhibition treats silence as a powerful tool of resistance alongside acts of speech. Work by artists Pauline Boudry and Renate Lorenz, Nikita Gale, Lawrence Abu Hamdan, Sharon Hayes, Baseera Khan, Kameelah Janan Rasheed, and Aliza Shvarts is included, along with historical documentation of silent protests.

Collins’ proposal was selected from a field of 45. As panelist Ciara Ennis, director/curator of Pitzer Art Galleries at Pitzer College, stated, “The current instability and urgency of our time demands radical and alternative responses. Abigail Raphael Collins’ curatorial tactic of deploying silence as a political tool for examining trauma and protest seemed like an appropriate and effective approach.” The other panelists in this year’s selection process were artist Samira Yamin, and Hammer Museum assistant curator Erin Christovale.

In Collins’ words, “Listening is central to almost every work in this exhibition, and it’s also central to the process of curating it. I’m coming to the artworks and protests with these questions, and listening to their often non-verbal responses: How does silence function in tandem with sounding? How are they interdependent? How is honoring interiority a political act? Can the loss of language we experience when our humanity is denied be held up as a testament of its own? What happens when we listen collectively to those silences? How can this collective reception heal, resist, and shift oppressive power structures? What does an intersectional feminist refusal to speak sound like?“

Abigail Raphael Collins is an interdisciplinary artist who works with video, installation, and photography. She draws from documentary, journalistic, and conceptual practices to reconsider relationships between media and systemic violence from a queer feminist lens. Collins received her MFA from UCLA and BFA from Cooper Union.

About the Emerging Curator Program – this program is designed to discover curatorial talent in Los Angeles and gives an opportunity for an emerging curator to partner with LACE. Applicants are reviewed by a panel that recommends a compelling project to the LACE team consistent with LACE’s experimental spirit. The next deadline to apply for the program is November 1, 2019, for presentation in early 2021.

Support for this exhibition provided by The Andy Warhol Foundation for the Visual Arts, Los Angeles County Arts Commission, and Karen Hillenburg.

Lawrence Abu Hamdan is a “Private Ear”. His interest with sound and its intersection with politics originate from his background as a touring musician and facilitator of DIY music. The artist’s audio investigations have been used as evidence at the UK Asylum and Immigration Tribunal and as advocacy for organizations such as Amnesty International and Defence for Children International together with fellow researchers from Forensic Architecture. Abu Hamdan received his PhD in 2017 from Goldsmiths College London.

Pauline Boudry and Renate Lorenz have worked together in Berlin since 2007. They produce objects and installations that choreograph the tension between visibility and opacity. Their films capture performances in front of the camera, upsetting normative historical narratives and conventions of spectatorship, as figures and actions across time are staged, layered and re-imagined. Boudry/Lorenz’s most recent installation and film work, Moving Backwards premiered in 2019 at the Swiss Pavilion of the 58th Venice Biennale. Recent solo exhibitions include Ongoing Experiments with Strangeness, Julia Stoschek Collection, Berlin (2019), Telepathic Improvisation at the Centre Culturel Suisse Paris (2018), Everybody talks about the weather… We Don’t, Participant Inc., New York (2017) and CAMH Houston (2017).

Nikita Gale is an artist living and working in Los Angeles, California and holds a BA in Anthropology with an emphasis in Archaeological Studies from Yale University and earned an MFA in New Genres at UCLA. Gale’s practice is often structured by long-term obsessions with specific objects and the ways these objects gesture towards particular social and political histories. Gale uses ubiquitous consumer technologies as frameworks to consider how individuals potentially reproduce their relationships to objects within their relationships to psychic space and political, social, and economic systems. For Gale, the term “reproduction” is as much a mechanical, technical process as it is a process rooted in sex, biology, and the organic.

Sharon Hayes engages multiple mediums–video, performance, and installation–in an ongoing investigation into specific intersections between history, politics, and speech. Hayes’ work is concerned with developing new representational strategies that interrogate the present political moment as a moment that reaches simultaneously backward and forward; a moment that is never wholly it’s own but rather one that is full of multiple past moments and the speculations of multiple futures. From this ground, Hayes addresses political events or movements from the 1960s through the 1990s. Her focus on the sphere of the near-past is influenced by the potent imbrication of private and public urgencies that she experienced in her foundational encounters with feminism and AIDS activism.

Kameelah Janan Rasheed is a Brooklyn-based learner from East Palo Alto, CA. In her work, she inquiries about the deeply intertwined spiritual, socio-political, ecological, and cognitive processes of learning/unlearning. Rasheed makes her inquiries visible through an ecosystem of iterative and provisional projects including sprawling, Xerox-based “architecturally-scaled collages” (frieze magazine, winter 2018); publications; public works; prints; digital archives; lecture-performances; library interventions; poems/poetic gestures; and other forms yet to be determined.

Baseera Khan is a New York-based visual and performance artist whose practice explores conditions of displacement, assimilation, and fluidity, all of which produce collaged identities. The core of their ideas center upon how the body is affected through surveillance and otherness, especially within capitalist-driven societies. Khan engenders installations and performances with their subjectivity through a decolonized, feminist perspective.

Eve Moeykens-Arballo based in Brooklyn, NY. She received her MA in curatorial studies from the University of Southern California in May 2020 and her undergraduate degree in French from Marlboro College in 2017. Recently, she participated in the UTA Artist’s Space virtual exhibition In Cahoots. She currently works at the Brooklyn Public Library and as a freelance research assistant.

Abigail Raphael Collins is an interdisciplinary artist working primarily with video and video installation. Her work borrows from documentary and conceptual practices to reconsider relationships between media and systemic violence through a queer feminist lens. She received her MFA from UCLA in 2015 and her BFA from Cooper Union in 2009. Recent exhibitions have been at the Los Angeles Municipal Art Gallery, Pasadena Armory, Marathon Screenings, Angels Gate Cultural Center, PØST, Torrance Art Museum, and Yeosu International Art Festical. She is the recipient of an FCA grant, Toby Devan Lewis Fellowship, UCIRA grant. Abigail is a former resident at Shandanken at Storm King, and Seoul Art Space Geumcheon. She currently teaches video art at CalArts, and curated an exhibition Los Angeles Contemporary Exhibitions.

Aliza Shvarts is an artist and writer who takes a queer and feminist approach to reproductive labor and language. Her current work focuses on testimony and the circulation of speech in the digital age. She received her BA from Yale University and Ph.D. in Performance Studies, from NYU. Shvarts was a 2014 recipient of the Creative Capital | Warhol Foundation Arts Writers Grant, a 2014-2015 Helena Rubinstein Fellow in Critical Studies at the Whitney Independent Study Program, a 2017 Critical Writing Fellow at Recess Art, and a Joan Tisch Teaching Fellow at the Whitney Museum of American Art (2015-2019). She has two upcoming solo exhibitions in New York: Purported at Art in General (February 2020), which will explore the last decade of her practice; and Potfuch at A.I.R (July 2020), which is the culmination of her 2019-20 Artist Fellowship there.

Samira Yamin received an MFA from UC Irvine and BAs in Art and Sociology from UCLA. She has had solo exhibitions at the Los Angeles Municipal Art Gallery, Santa Monica Museum of Art now ICA LA) and PATRON Gallery, and has been included in numerous group exhibitions including at the Craft and Folk Art Museum (now Craft Contemporary), the Camera Club of New York, Metropolitan State University in Denver, and San Francisco State University. A recipient of grants from the Joan Mitchell Foundation, the California Community Foundation and the Foundation for Contemporary Arts, Yamin has been an artist in residence at the Rauschenberg Residency, Headlands Center for the Arts, Penumbra Foundation, and the Djerassi Resident Artists Program. She lives and works in Los Angeles, CA.