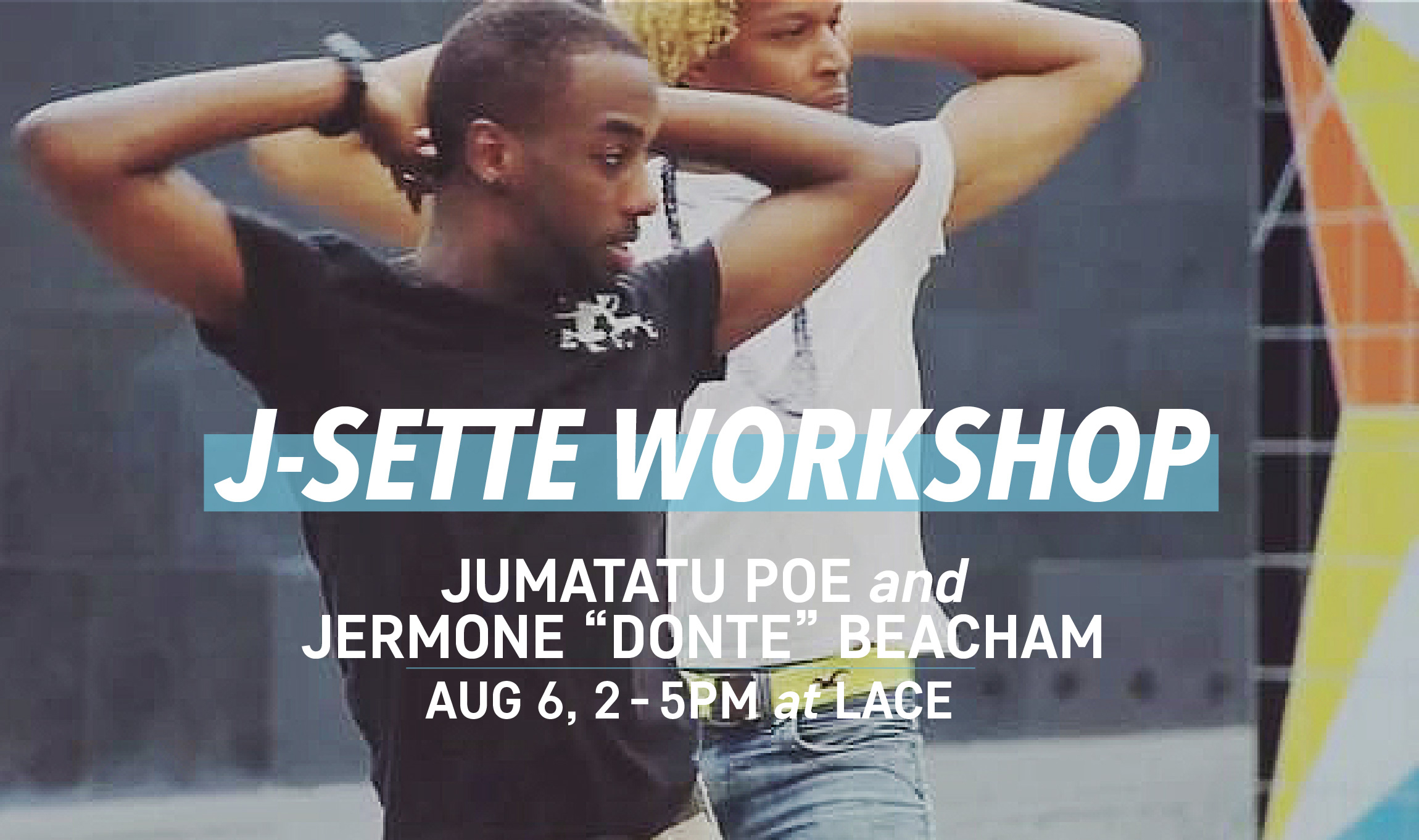 Join Jermone “Donte” Beacham and Jumatatu Poe for two FREE dance workshops centered around experiments in J-Sette performance. J-Sette, also known as Bucking, is a performance style popular in the southern United States, practiced widely among majorettes and drill teams at historically Black colleges and universities, and also among teams of primarily queer men who compete in gay clubs and pride festivals. The workshops will focus on bombastic performance energy, complex relationships to rhythm and music, movement precision, group dynamics, and discovering joy in flesh and community. All bodies are encouraged to participate, regardless of previous training or ability; however, we are particularly interested in preserving the space as a home of empowerment and cultural/historical positioning for queer folks of color.

Workshops will take place Saturday and Sunday, August 6 and 7, from 2 – 5pm. Saturday’s workshop will take place at Los Angeles Contemporary Exhibitions, and Sunday’s location will take place at we live in space. Donte and Jumatatu will also perform at Highways Performance Space (Santa Monica) the following weekend on Friday, August 12th. Following the three hour workshop each day, participants who are interested in performing with Donte and Jumatatu (in a short segment of the work) will be invited to stay an additional hour – until 6pm – to rehearse. Please note that participation in the performance would be unpaid. Again, all bodies are encouraged to participate. If interested, please indicate your interest in the comments section below.

We hope you can join us! Feel free to comment below with questions.

WHAT TO WEAR/BRING:
– wear clothes that you can move in, and that make you feel good about yourself and your body
– bring water to drink
– wear shoes to dance with, also please note that there will be brief periods each day in which we do small movements without shoes
– each day, we will spend brief periods laying on the floor; you may want to bring something to wrap your hair
– we will be sweating, you may want to bring a towel

A LITTLE MORE ON J-SETTE
J-Sette is a performance form coming out of the Southern US states, namely historically Black colleges and universities. The name J-Sette is a reference to Jackson State University’s majorette line, The Prancing J-Settes. In the late 70’s, they became noteworthy for their dismissal of the majorette baton, and their use of popular music to notably athletic, sensual (sometimes raunchy), and expansive choreographies performed in stadium seats during athletic games. The adoption of popular music and the release of the baton caught on among other Southern HBCUs, and several developed their own respective styles. J-Sette is the popular culture name for these performance techniques, emerging from the majorettes. Parallel to this history, Black gay men in the south also practiced these performance traditions in gay clubs, pride parades, and now even in their own festivals competitions.

ABOUT THE INSTRUCTORS/ARTISTS
Jumatatu M. Poe
I am a choreographer and performer based between Philadelphia and New York City who grew up dancing around the living room and at parties with my siblings and cousins. My early exposure to concert dance was through African dance and capoeira performances on California college campuses where my parents studied and worked, but I did not start formal dance training until college with Umfundalai, Kariamu Welsh’s contemporary African dance technique. My work continues to be influenced by various sources, including my foundations in those living rooms and parties, my early technical training in contemporary African dance, my continued study of contemporary dance and performance, and my recent sociological research of and technical training in J-setting with Donte Beacham. I produce dance and performance work with idiosynCrazy productions, a company I founded in 2008 and now co-direct with Shannon Murphy. Since 2012, I have been engaged in a shared, multi-tiered performance practice with NYC-based dance artist Jesse Zaritt. Previously, I have danced with Marianela Boán, Silvana Cardell, Emmanuelle Hunyh, Tania Isaac, Kun- Yang Lin, C. Kemal Nance, Marissa Perel, Leah Stein, Keith Thompson, Kate Watson-Wallace, Reggie Wilson, and Kariamu Welsh (as a member of Kariamu & Company). As a performer, I also collaborate with Merián Soto. I am an Assistant Professor of Dance at Swarthmore College.
My middle name is Mtafuta-Ukweli, which means “one who searches for the truth”.

Jermone “Donte” Beacham
I’ve been dancing has been in my blood since I can remember. It started off with hip hop dancing for my high school when I began to notice my skill. After doing that for 4 years, I was introduced to the world of J-Setting, but by women. J-Sette historically refers to Jackson State’s University’s female drill team that began in the 1970s. They “created” the dance style, and thus far have made it a distinctive form of dance. I was interested in this type of dance, but not entirely until I saw a group of males performing it. At that point, I claimed the style for myself and perfected it on my body. I began solo and eventually joined and initiated different groups. Currently, I have my own J-Sette line, Mystic Force (initiated in Jackson, MS, currently in Dallas, TX), and plan to increase our renown in this style of dance in our community, and eventually internationally. Previously, I served as co-captain of Dallas’ Texas Teasers. I have participated and competed in several events and competitions, including 2 SetteItOff video challenges, Atlanta Pride 2010, Tennessee Classics 2009, and Memphis Pride 2008. In 2015, I was named New Legendary by the Meet Me On the Dance Floor J-Sette council. Since 2011, I have been involved as an artistic collaborator with contemporary choreographer, Jumatatu Poe, through Philadelphia’s idiosynCrazy productions.