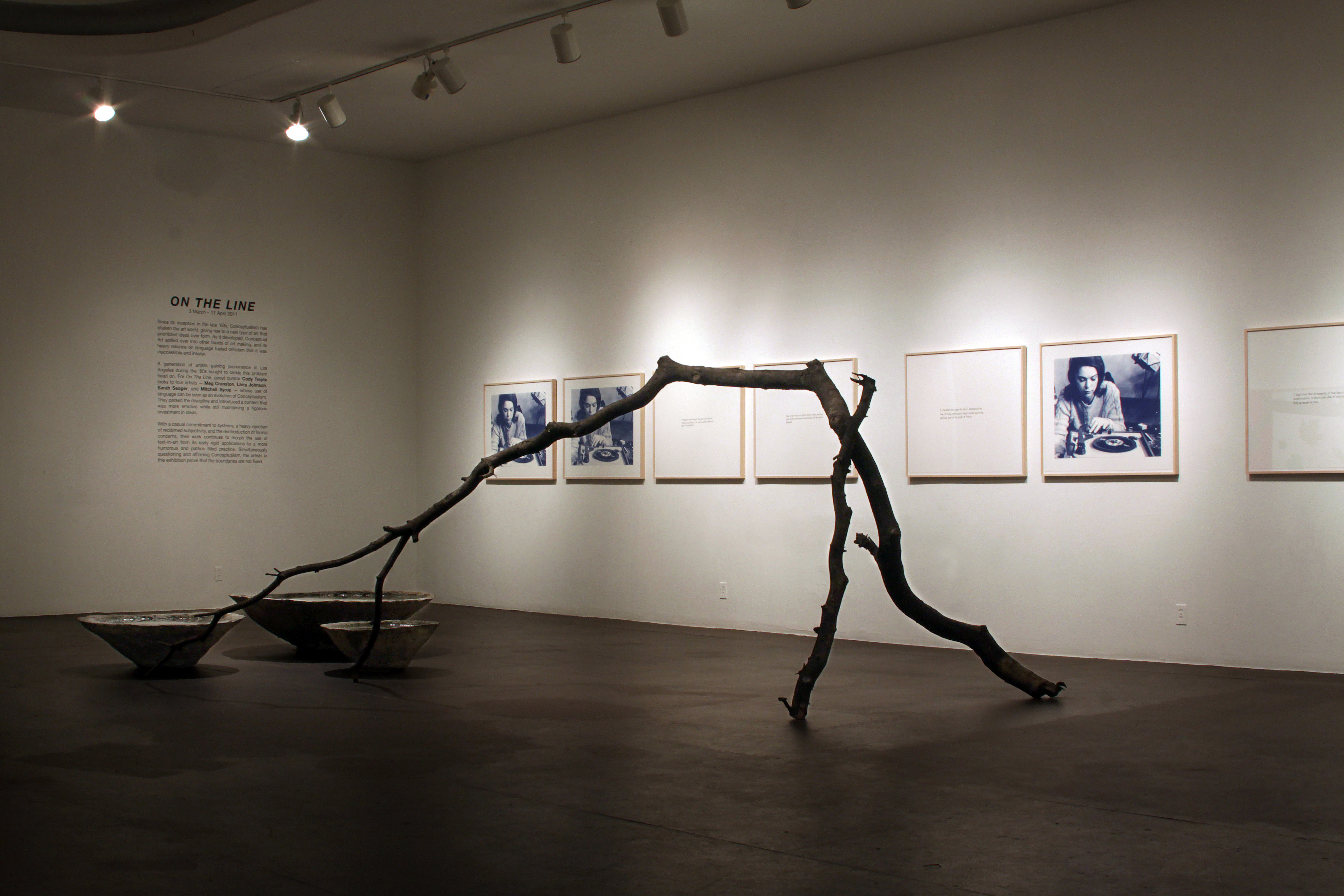 As part of the On the Line exhibition, LACE invites you to join artist Sarah Seager and curatorCody Trepte for a discussion of the artist’s work in relationship to language, literature, and Conceptualism. For this exhibition, Seager presents graceful new work in addition to older works. Her career as an artist spans a breath of time which has seen language and text-based imagery develop dramatically in both art and society. For this event, both curator and artist will address this evolution’s influence on art and practice.

ABOUT THE EXHIBITION
Since its inception in the late ‘60s, Conceptualism has shaken the art world, giving rise to a new type of art that prioritized ideas over form. As it developed, Conceptual Art began to spill over into other facets of art making, but its heavy reliance on language fueled criticism that it was inaccessible and insider.

A new generation of artists gaining prominence in Los Angeles during the ‘80s sought to tackle this problem head on. On The Line looks to four artists — Meg Cranston, Larry Johnson, Sarah Seager, and Mitchell Syrop — whose use of language can be seen as an evolution of Conceptualism. They parsed the discipline, and introduced a content that was more emotive while still maintaining the rigorous investment in ideas that artists like Sol Lewitt and Joseph Kosuth set forth.

With a casual commitment to systems, a heavy injection of reclaimed subjectivity, and the reintroduction of formal concerns, the artists in this exhibition continue to morph the use of text-in-art from its early rigid applications to a more humorous and pathos filled practice. The result is a simultaneous questioning and affirmation of Conceptualism which allows the discourse to continually reinvent itself.

ABOUT THE ARTIST
Sarah Seager’s work offers quiet glimpses into experiences both private and collective. Her works on paper, sculptures, and paintings are layered with elements of pathos and memory, while at the same time delicately maintaining a conceptual rigor. Seager has exhibited internationally at venues such as 1301 P.E., Los Angeles; Luhring Augustine, New York; Kunstlerhaus Palais Thurn und Taxis, Bergenz, Austria; Kunstverein Munster, Munster, Germany; The Power Plant, Toronto; the Whitney Museum of American Art; The Renaissance Society; and the Museum of Contemporary Art, Los Angeles. In addition to an extensive exhibition history, Seager has released a number of recordings and publications, including the artist book Excuse My Dust.

ABOUT THE CURATOR
Cody Trepte is a Los Angeles based artist who works primarily in drawing, printmaking and photography. He has exhibited at venues such as Eleven Rivington, New York; Centro di Cultura Contemporanea Strozzina, Florence, Italy; Ausitn Museum of Art; Steve Turner Contemporary, Los Angeles; Weatherspoon Art Museum, Greensboro, North Carolina; and Kunstverein INGAN e.V., Berlin. He received a B.F.A. from New York University in 2005 and an M.F.A. from the California Institute of the Arts in 2010. On the Line is Trepte’s first major curatorial project. Find out more at www.codytrepte.com