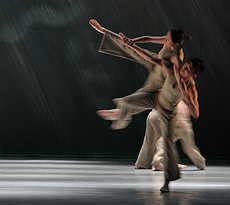 Part 1: “Dancing Mother Courage” : Cheng-Chieh Yu is intrigued by performance roles that investigate the place of women in respect to martial cultures. There are traditional female martial archetypes and active participants such as Hua Mulan (a women warrior). These personas do not resist the use of violence, as pacifist antiwar-feminists might, but see the potential of being in a 3rd position between the aggressive use of force and pacifism. Brecht’s play, “Mother Courage and Her Children,” was for Yu an inspirational drama involving a desperate barter woman in a war ravaged society seeking to position herself in non-alignment, but caught in the unending dilemmas of survival.

Part 2: Shot in Guangzhou, China, and Los Angeles, “Good Person” is a performance-based video that follows the surreal journey of a single female character moving in and out of abstracted fantasy. The video is loosely based on Brecht’s “The Good Person of Setzuan.” Instead of focusing on the plot of the original play, this video proposes the essence of duality and conflict within one person.

Part 3: “Malicious Delicious: Movement Studies for ‘Mack the Knife’” presents eight performers experimenting with partnering, while acknowledging the tone of antagonism in their exchange.  This is the “malicious.” The “delicious” is the allure of the malicious, manipulative bad ass, as exemplified by Macheath, or Mack the Knife, from the Brecht play, “Three Penny Opera.” The choreography references two movement sources: that of Contact Improvisation and Listening Hands (from the Chinese Martial Arts practice of Tai Chi Quan).

Cheng-Chieh began her performance career touring with Cloud Gate Dance Theater of Taiwan. When residing in New York City (1989 to 2001), Cheng-Chieh performed in the companies of The Solomons Co. Dance, Irene Hultman, Jose Limon, Bebe Miller and as a guest artist for the Ralph Lemon Dance Project.

Her choreography has been presented by numerous venues in NYC, Los Angeles, Germany, China, Singapore and Taiwan and her choreographic commissions have included the Chinese Information and Cultural Center, Movement Research, Danspace at St. Mark’s Church in NYC, the Beijing Modern Dance Company and Guangdong Modern Dance Company in China, The Creative Society and Sun-Shier Dance Theatre of Taiwan.

Her extensive teaching credits include the Beijing Dance Academy, ATV Academy for Performing Arts, Guangdong Modern Dance Festival in China, Taipei National University of the Arts/Taiwan, as well as in NYC at Movement Research, The Limon Institute and Dance Space Inc. Cheng-Chieh holds a M.F.A. in Dance from Tisch School of the Arts, New York University. She is an Associate Professor at the Department of World Arts and Cultures/Dance, UCLA.

Dino Dinco was raised by a family of fighting chickens in rural Pennsylvania before moving to Los Angeles as a child. He is an independent curator, filmmaker and artist. His work has been exhibited in solo exhibitions in Paris (2005, 2001), Los Angeles (2001), and San Francisco (2009, 2004), as well as in group shows in London, Paris, Antwerp, Hasselt (Belgium), Mexicali, New York and Hamburg. Selections from his photographic series “Chico” were featured at Salon Paris Photo at The Louvre, Paris (2001 – 2002). His work has appeared in publications such as i-D (UK), Dutch (France), Revista Espacio (Mexico), V (US), Vogue Brasil (Brazil), Tokion (Japan), BIG (US), Studio Voice (Japan), Zoo (France) and BUTT (Holland).  Dinco’s award-winning short film — “El Abuelo” — premiered at the Tate Modern in London, May 2008 and continues to screen in festivals and schools. His first feature length documentary film — “Homeboy” — profiles gay Latino men who were in gangs and premiered at the 2011 Mardi Gras Film Festival in Sydney.  Dinco’s recent exhibition of photographs, installation, and objects, TODOS SOMOS PUTOS (with Julio Torres) was favorably reviewed by novelist and Semiotext(e) co-editor, Chris Kraus, in the December 2010 edition of Artforum.