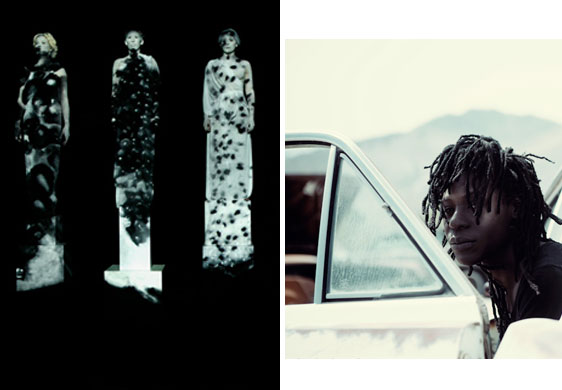 17 November 2011
An Evening of Choreography, Performance, and Discussion curated by Dino Dinco

mecca vazie andrews and the members of performance / dance collective WIFE (Jasmine Albuquerque, Kristen Leahy & Nina McNeely) have been choreographing, performing and teaching dance and movement for years.  Collectively, their bold and unique performative work has been seen locally and internationally on the stages of the Grammy Awards, in myriad television commercials, music videos, museums and galleries to underground nightclubs, a Hollywood sushi bar and even a laundromat.

As with most freelance artists, there’s a certain hustle that’s part of the territory, a need to both create and survive.  For many, this includes a day job that may or may not be related to one’s art.  For Los Angeles choreographers, part of creating / surviving often includes working with the most visible stars in the entertainment industry, as Los Angeles and particularly Hollywood (the geographic neighborhood, the cinema, music and advertising factories) continue to comprise the epicenter of English-language pop culture and entertainment.  What is “local” in Los Angeles is often instantly and also “international,” not only because of the film and TV production, advertising and media embedded in the day-to-day culture(s) of the city, but also as so many globally recognized entertainers, like Prince, for example, reside here.

After the performances, we’ll talk to mecca and WIFE about their individual approaches to dance and movement, as well as how they navigate art and commerce, living and working in Los Angeles.

ABOUT THE ARTISTS
mecca vazie andrews is a choreographer, dance instructor, performance artist and Artist Director of The MOVEMENT movement.

a lions den where nonsense is accompanied by a long line of dignitaries.
sometimes a school with the Ubsurd
occasionally sleeping with the Romantic
Relentlessly behind Social Action
Sharing the simple word of Please and Thank You and MOVEMENT movement, all kinds thereof.
Communication on a big rig sized scale.

She will only be seen in the dark.
She is a magician of picture and light.
She exists in many dimensions.
She is visceral contemporary dance.
She is studying the subtleties of your behavior.
She is eternally bound to archetype, myth, lore, alchemy, and dreams.
She is metamorphosis.She is the daughter of Jim Henson, Chris Cunningham, Akira Kurosawa, Kathy Rose, Wendy Carlos, Yayoi Kusama, Planningtorock, Aleister Crowley, her friends, and you.

WIFE is dance interacting with original projected animations, music, light, and costumes.  She has been seen at Pieter, at the El Portal Theatre, and as part of the Bootleg Dance Festival 2011.  WIFE’s “The Grey Ones” was presented at the Long Beach TEDx SoCal event, and is also featured on the electronic music artist Amon Tobin’s box set DVD.  Currently, WIFE is creating a full-length dance/projection work to be performed at Human Resources and featured in Native Strategies, a biannual journal and platform for performance art in Los Angeles, and has been invited to perform in the Forum Lounge at Santa Barbara Contemporary Arts Forum in May 2012.  She was born of three Los Angeles based artists:

Jasmine Albuquerque is a dancer, choreographer, and instructor. She has danced with such companies as Hysterica, Blue13 Bollywood, Collage Dance Theater and Ryan Heffington’s psycho-dance performance, Fingered. Other live performances include We Are the World, Hazm, and Hecuba in various venues around LA such as the Hammer Museum, the Ford Amphitheater, MOCA, the Orpheum Theater, LACMA, the Joshua Tree Music Festival, and even a laundromat. She has choreographed music videos for Bob Wayne (directed by Jennifer Tzar) and danced in videos for Beck, You Will Know Us By the Trail of the Dead, Morcheba, and Todd Edwards. She studied contemporary movement in Budapest, Hungary and at The Edge in Hollywood after years of classical ballet and jazz training. While majoring in History, she danced for the Department of World Arts and Cultures at UCLA and later taught movement workshops in Chiapas, Mexico where she turned vatos into ballerinas. Her current work with WIFE contines to challenge and inspire her as a performer.

Kristen Leahy is a dancer/choreographer based in Los Angeles. For the past ten years, Leahy has danced with Ryan Heffington (Fingered) and other LA choreographers in clubs, art galleries (MOCA, LACMA), with bands (We Are the World, Mt. Sims, Shiny Toy Guns), in theater productions, and in numerous music videos and short films.  Her choreography credits include the Sister Mantos 2009 European Tour, Pray/Prey, a ritual performance in collaboration with artist Amanda Street, and the ongoing work as a co-creator of WIFE.  Leahy also earned her M.S. in Dance/Movement Therapy from Pratt Institute, and currently practices D/MT with adults at a psychiatric facility and teaches adult tap classes.

Nina McNeely is a video artist, choreographer and dancer based in Los Angeles. She has choreographed for music artists including Yeasayer, Morcheeba, Sam Sparro, We are The World, Dorian Wood, and Baseck.  Her interactive projection work was recently featured at MOCA for Ryan Heffington’s “Heffington Moves MOCA.” Nina’s film “The Dinner Party” premiered at Dance Camera West in 2010.  She has danced for pop icons such as the B-52’s, Britney Spears, Fergie, and Peaches. Her commercial career has taken a turn toward editing and animating, and her latest successes include Sam Sparro’s “Pink Cloud” music video, Dorian Wood’s “Brutus” music video, interviews for ELLE Magazine online, and a video look book for L’Agence.  Her collaboration with WIFE is an experiment in the possibilities of dance, video and fantasy.

ABOUT THE CURATOR
DINO DINCO was raised by a family of fighting chickens in rural Pennsylvania before moving to Los Angeles as a child. He is an independent curator, filmmaker and artist. His work has been exhibited in solo exhibitions in Paris (2005, 2001), Los Angeles (2001), and San Francisco (2009, 2004), as well as in group shows in London, Paris, Antwerp, Hasselt (Belgium), Mexicali, New York and Hamburg. Selections from his photographic series “Chico” were featured at Salon Paris Photo at The Louvre, Paris (2001 – 2002). His work has appeared in publications such as i-D (UK), Dutch (France), Revista Espacio (Mexico), V (US), Vogue Brasil (Brazil), Tokion (Japan), BIG (US), Studio Voice (Japan), Zoo (France) and BUTT (Holland).  Dinco’s award-winning short film — “El Abuelo” — premiered at the Tate Modern in London, May 2008 and continues to screen in festivals and schools. His first feature length documentary film — “Homeboy” — profiles gay Latino men who were in gangs and premiered at the 2011 Mardi Gras Film Festival in Sydney.  Dinco’s recent exhibition of photographs, installation, and objects, “Todos Somos Putos” (with Julio Torres) was favorably reviewed by novelist and Semiotext(e) co-editor, Chris Kraus, in the December 2010 edition of Artforum.  His favorite superhero has always been Underdog.