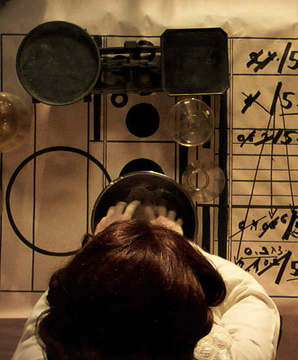 For one night only, LACE and the Jewish Artists Initiative of Southern California host a screening of Israeli filmmaker Maya Zack’s work, Mother Economy. Zack will present her film along with a Q&A session exploring Jewish identity in conjunction with a week-long cultural exchange and residency program between Jewish artists from Israel and Los Angeles. Her nineteen minute film has been described as “a powerfully imaginative meditation on Holocaust remembrance and on the myth of the Jewish mother,” vacillating between the mediums of experimental media and video art.

A graduate of Bezalel in 2000, Zack already boasts an impressive filmography and catalog of worldwide film screenings, solo exhibitions, and awards. She is a frequent lecturer at Bezalel Academy and the Tel Aviv University Department of Film and Television, and is currently garnering most of her attention for Mother Economy. This masterful twenty-minute work, selected from 500 submissions as the winner of the Celeste Art Prize during the 2008 Berlin Video Art Festival, is a contemporary exploration of issues of Jewish identity, cultural memory, and emotions.

Find out more about Zack’s film on the JAI website: www.jaisocal.org
And view the trailer for Mother Economy here: http://www.youtube.com/watch?v=k6XqxBsQPdk&feature=player_embedded