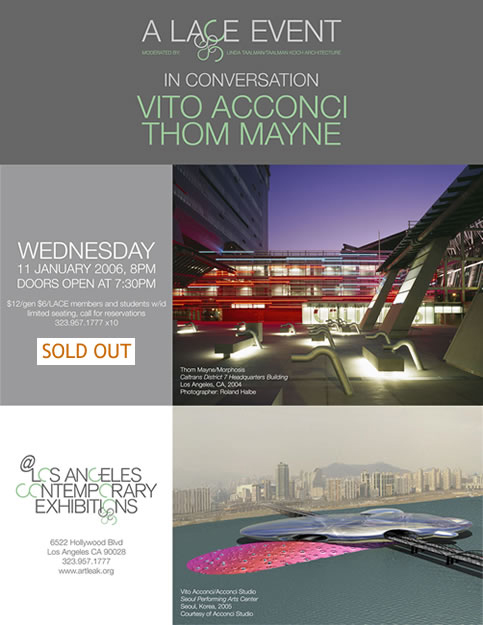 LACE is pleased to present Vito Acconci and Thom Mayne in conversation on 11 January 2006 at 8pm. Renowned artist and architect, Vito Acconci, is coming to Los Angeles in early January 2006. To offer a truly memorable event, we have invited Thom Mayne to join Acconci. Mayne’s work has been chosen for numerous awards, most recently, he has been awarded the 2005 Pritzker Prize – an award considered by many to be architecture’s Nobel Prize. Linda Taalman, of Taalman Koch Architecture, will moderate the event.

Vito Acconci develops his work as a visual artist, a video maker, a body artist, and a designer of architectural and urban works of art. Acconci Studio, a think-tank of art and architecture where he collaborates with a group of young designers, currently producing works of public art for urban and unique setting. His influential, provocative and often radical art-making practices have earned him international recognition. Acconci Studio is located in Brooklyn, NY.

Thom Mayne is a Los Angeles-based architect known for breaking through traditional bounds of forms and materials. He is principal of Morphosis, meaning “manner of formation.” The architectural critic Witold Rybczynski comments, “His buildings have jagged, fractured forms and haphazard compositions that make them look, at first glance, as if they were not quite finished—or were falling apart. This is a subterfuge, of course, since they are solidly built and carefully detailed, but their appearance leaves the distinct impression of chaos.”

This conversation is a PUBLIC INTEREST event. Taking place throughout 2006, this series explores the evolving nature of public practices in an urban context by focusing on contemporary architecture, design and visual art practices that challenge standard notions of public space and manifest social as well as physical presence within the built landscape. Our location in Hollywood is particularly relevant with this district’s current phase of redevelopment and both Acconci and Mayne are ideal creative practitioners to set the tone for this exploration.