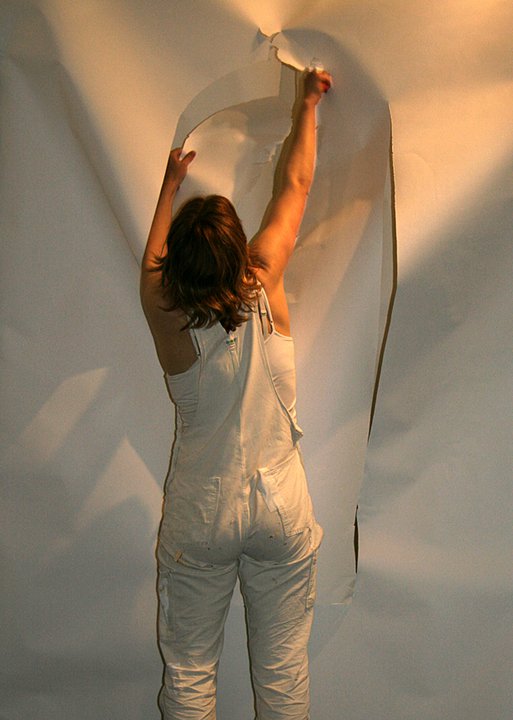 Nancy Popp is a Los Angeles-based artist and educator who works in performance, video, drawing and photography.  Her projects investigate the performativity of site through geography and identity.  Recent and upcoming exhibitions include ‘Untitled (Street Performances) at the Atlanta Contemporary Arts Center, The Audacity of Desperation at Gallery PS122 in New York, Documental at Pilot Projekts in Düsseldorf, Cheking Point at The Rex Cultural Center in Belgrade,  Performing Public Space at Casa del Tunel in Tijuana, Mexico and Criss-Crossing at Cal Poly Pomona. She holds degrees from Art Center College of Design and the San Francisco Art Institute. Visit her website at nancypopp.com

Moment Trigger is a 2-piece experimental noise/psych/thrash band from Los Angeles, CA. Founding members Chris Lazard and Tierra Williams formed Moment Trigger in Newhall, CA in early 2005. At this time, Moment Trigger performed almost exclusively at Cal Arts, then expanded to underground “show-spaces” such as Il Corral, The Smell and Women Of Crenshaw. No simple description could categorize Moment Trigger’s sound, as the compositions vary from album to album/song to song. Early recordings could be described as Harsh Noise, reminiscent of Japanoise of the late 80’s/early 90’s.  More recent recordings have elements of early industrial, extreme psych, doom, and thrash. In addition to Lazard’s guitar instrumentation and Williams on micromoog, Moment Trigger’s use of one-of-a-kind instruments complicate concrete description. Such home-built/DIY instruments include Slinktar, Modified Dream Machine, active filter for guitar, 3 osc synthesizer, and square wave generator (to name a few). They have toured the western US, performing at SXSW, Spring Reverb Festival, Turn The Screws Festival, Brainbombs Festival and many special arrangements along thecoast. See and hear Moment Trigger here.

Through a grant from London’s St. Martins College of Art and Design, Dinco was commissioned by the Fashion in Film Festival 2008 to make a short film. His short, “El Abuelo,” premiered at the Tate Modern in London, May 2008 and continues to screen in festivals worldwide.  In 2008, “El Abuelo” was nominated for the coveted Iris Prize, Cardiff. In 2006, Dinco founded and co-curated YOU WEAR IT WELL, an international film program featuring films and videos on fashion and style.  He has also worked in television commercial and music video production for over a decade. Visit his website at www.dinodinco.com