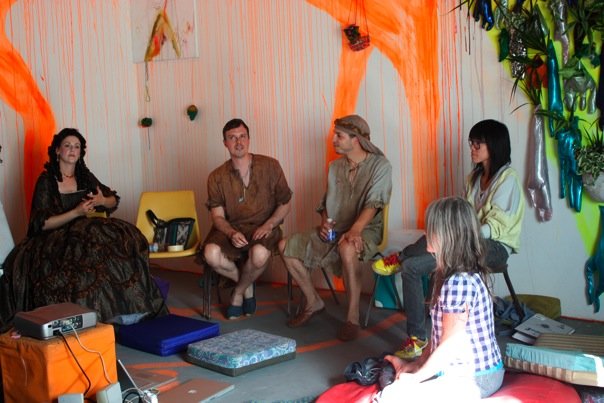 Join ASAP @ LACE in a hands-on workshop meditating on curatorial practice and its future in Los Angeles and beyond. The conversation will begin with a round-table discussion with curators Anat Ebgi, Charlotte Eyerman, and Lisa Melandri and artist Rob Renolds on their work in the field, projects that excite them and what their hopes are for future endeavors. Later, Renolds will lead a workshop and discussion on the Wunderkammer (wonder-room).

Anat Ebgi holds a Master of Arts degree from the Center for Curatorial Studies at Bard College, class of 2008. Her Master’s thesis Under The Influence featured work by John Baldessari, Jen DeNike, Nancy Holt, Tim Jackson, Joan Jonas, Dave Jones, Jill Magid, Rachel Mason, Michele O’Marah, and Robert Smithson. In 2004, she received her Bachelor of Arts degree in Arts in Context from the New School for Social Research in New York City. Anat co-founded the nomadic and experimental FRISBEE FAIR, which took place in a hotel on Miami Beach during Art Basel from 2004-06, and in a converted YMCA building in Chelsea during the Armory Fair in 2005. She has curated exhibitions in galleries in New York, Miami, Chicago, and Los Angeles. In 2009, she co-curated, with Rita Gonzalez, the 2009 Cal-Arts graduating MFA class exhibition, Why Theory. Find out more about what Anat is doing at www.thecompanyart.com

Charlotte Eyerman is an independent curator and scholar specializing in Modern and Contemporary art, based in Los Angeles. She earned Master’s and PhD degrees in the History of Art at the University of California at Berkeley. She has held curatorial positions at the J. Paul Getty Museum in the Department of Paintings, as well as at the Saint Louis Art Museum, where she was Curator and department head of Modern and Contemporary Art. Most recently, she was a director at Gagosian Gallery, Beverly Hills. Eyerman has published and lectured extensively at museums and universities nationally and internationally, and has curated numerous exhibitions including, “Courbet and the Modern Landscape” (Getty, 2006), “Action/Abstraction: Pollock, deKooning, and American Art, 1940-1976,” which won awards for excellence from the Association of International Art Critics, the Association of Art Museum Curators, and the National Jewish Book Award (St. Louis, 2008), and numerous contemporary and new media exhibitions, including Doug Aitken, “Migration: Empire,” and Tom Friedman, “Ream” (St. Louis, 2007-2009). She founded an art consultancy business, ElucidArt, Inc. (Los Angeles, 1999-2002), and was on the faculty at Union College from 1994-2001, and was named the John D. and Catherine T. MacArthur Assistant Professor in 1996. Eyerman has also taught art history courses at the University of Southern California and Art Center College of Design in Pasadena.

Lisa Melandri is Deputy Director for Exhibitions and Programs at SMMoA, where she has served in a managerial and curatorial capacity for ten years. Melandri is the curator for Combustione: Alberto Burri and America (2010, with Michael Duncan), Enigma Variations: Philip Guston and Giorgio de Chirico (2006, co-curator Michael Taylor) and William Pope.L—Art After White People: Time, Trees and Celluloid…(2007), and is currently organizing monographic projects for SMMoA on multi-media artist Marco Brambilla and post-war artist Salvatore Scarpitta. She will serve as co-curator with SMMoA executive director Elsa Longhauser for the upcoming exhibitions Beatrice Wood: Career Woman and Al Taylor: Wire Instruments and Pet Stains. At SMMoA, she is responsible for the Project Room exhibition series, and has featured such national and international emerging artists, as Simmons&Burke, Nira Pereg, Nicole Cherubini, Virgil Marti, Jeni Spota, Loren Holland, Mariella Bettineschi, and Arnold Mesches. Melandri received her BA at Harvard University and MA in from the Williams College Graduate Program in the History of Art.