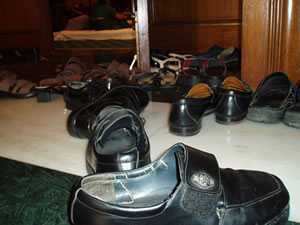 LACE is please to announce that for the first time in Los Angeles, the audio-activist organization Ultra-red will host a day-long conference on 1 April 2006, presenting the various activities of its members and working groups. Interrogating a multiple of political and geographic territories, presentations from Ultra-red members will investigate the autonomy of migration in Europe, participatory community-development in East Los Angeles, inquiry-based education strategies in Los Angeles county, organization of the silence around HIV/AIDS in North America, and the dialogue between militant sound investigations, popular education and autonomy politics.

Presentations by Ultra-red members Elizabeth Blaney, Manuela Bojadzijev, Pablo Garcia, Dont Rhine, Robert Sember and Leonardo Vilchis will make manifest the various analyses around political subjectivity, the role of education in political organizing and the problematics of art in the context of organizing. Allies of Ultra-red will then be asked to respond to ideas raised in the initial round of presentations ­ challenging the perspectives of Ultra-red members. The day-long event will conclude with breakout discussions with audience members to further consider ideas and issues raised in the presentations. Confirmed respondents include Simmi Ghandi (Garment Workers Center); Susanne Lang (kein.org); Jackie Leavitt (UCLA, School of Public Policy); Emily Roysdon (LTTR); Walt Senterfit (Community HIV/AIDS Mobilization Project); and David Thorne (The Speculative Archive). Ultra-red member Eddie Peel will perform audio interventions throughout the event.

The workshop is open to the public for artists, community organizers, and anyone interested in strategizing around the intersection between critical art practice and political intervention.

About Ultra-red In 1994, two AIDS activists working with the Hollywood-based needle exchange, Clean Needles Now, launched the sound-art collaboration Ultra-red. Ultra-red assumed as its starting place the specific possibilities for art and activism within the sound recording of social spaces. The dual identities of Ultra-red’s founders — that of artists and organizers — became the fundamental basis of the group’s methodology and membership.

Over the span of it’s first ten years of collaborations, Ultra-red shifted membership and traversed a variety of urban sound spaces as they formed new alliances. The increasing diversity of interventions and sound investigations, in terms of specific political and geographical sites, compelled Ultra-red to change its structural model in 2004. As outlined in its “Articles of Incorporation”, Ultra-red remade itself as an aesthetic-political organization able to accommodate a variety of autonomous projects involving different teams each identified as Ultra-red.

Within its first year operating as an organization, Ultra-red launched three team-based projects. These include the US-based AIDS organizing project SILENT|LISTEN, the European migrant investigation BLOK70, and the workshop-based collaboration with artists and community activists named ARTICLES OF INCORPORATION. Up until now, the particular analyses and methodologies to arise from these three projects have had little chance to enter into dialogue with each other as the only Ultra-red member to participate in all three is the organization’s Information Secretary, Dont Rhine.

Public Interest Salon Series at LACE
The Public Interest Salon Series explores the evolving nature of the public realm by focusing on contemporary architecture, design and visual art projects that challenge standard notions of public space to manifest social as well as physical impact within an urban context. The series launched on 11 January 2006 with a conversation between Vito Acconci/Acconci Studio and Thom Mayne/Morphosis, moderated by Linda Taalman/Taalman Koch Architecture. Ultra-red | Encuentro, hosted by the audio-activist organization, Ultra-Red, is the second event in this quarterly series.