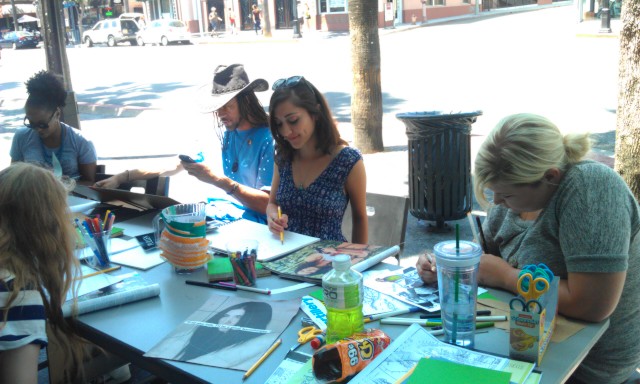 LACE is located in the heart of Hollywood, an ideal place to observe and contemplate the collision of Los Angeles — its intricate networks hum with activity as resources are transferred and spaces are reconstructed through use or development. ASAP’s 2011 Re-Visions of LA drawing workshops will build conversations around how our urban environments are constructed and what that means to our every day lives. Each month a new group of artists will spend an afternoon at LACE providing free drawing classes.

David Michael Lee holds a BA in photo/studio arts, and an MFA in drawing, painting and printmaking. Having worked in education now for 10 years teaching these classes, I have had great experiences working with a variety of students. In addition to teaching I have also worked in museums, galleries and art centers handling art, curating and organizing private and public art collections. As an artists I live in the now, in the past and in the future.  Having learned from the actions of others and the lessons of fathers, I then project these ideas into the future as far as it’s taken from the past. The conductor of an orchestra of life and concepts, dictated through visual media, I am a filter for history, reprocessed then directed into a cognitive response and prediction.  Art as observation and story telling, imagery taken from life and re-contextualized, and an introduction into an alternative way of perceiving the world from the viewpoint of another life participant is my role as an artist. For more information visit: davidmichaellee.com

Brian Porray makes paintings and drawings of corrupted systems on the edge of collapse. He spins his history and obsessions with science and technology, creating a toxic language through which he depicts raucous psychedelic environments filled with broken mechanical assemblages.Porray attended graduate school at the University of Nevada, Las Vegas and is a recipient of the 2010 Joan Mitchell Foundation MFA Grant. He relocated to the Greater LA area last year and recently had his first Los Angeles solo exhibition at Western Project. He is currently in a group exhibition at CUE Foundation in New York City and earlier this year he was included in ‘Spectrum’ at the W. Keith and Janet Kellogg University Art Gallery on the campus of Cal Poly, Pomona. His work has appeared in New American Paintings #84, and #87. For more information visit: brianporray.blogspot.com or western-project.com

Kelsey Lou Ann Riley (KELSO LA) is the creator of the zine “The Wreckless Press”, an independent publication based around graffiti and street art culture. She began producing The Wreckless Press roughly 3 years ago in the San Francisco Bay Area, where it was widely distributed in a variety of locations including, RVCA on Haight St. Kelsey’s interest in graffiti and street art began at the early age of 15, where she was regularly frowned at by those in positions of authority and regarded as a regular hooligan, in her hometown of Napa, California. Now she currently resides in Downtown Los Angeles where the culmination of her interests in graffiti and zine-making has led her to a career in the print-making industry, and where her natural hooligan behavior is more socially acceptable.  She is currently on staff at Modern Multiples Fine Art Serigraph/Silkscreen where she assists production, project coordination, project management, and administration.  Kelsey Riley has worked alongside some of today’s most prolific graffiti art enthusiasts such as; Banksy, Saber, and Shepard Fairey, to produce fine art print editions of their original art. Kelsey interned at Modern Multiples for several months after taking print-making classes at Pasadena City College. She is now Studio Assistant to Richard Duardo (Owner/Studio Director at Modern Multiples), who has played a pivotal role in the Los Angeles Chicano art scene for the past 35 years.

ASAP (after school arts program) is an arts education collective with a faculty and student population that is always in flux. Led by Michael Ano, Elana Melissa Hill and Elizabeth Watkins, ASAP is motivated by the belief that “Arts education should be available to everyone.”