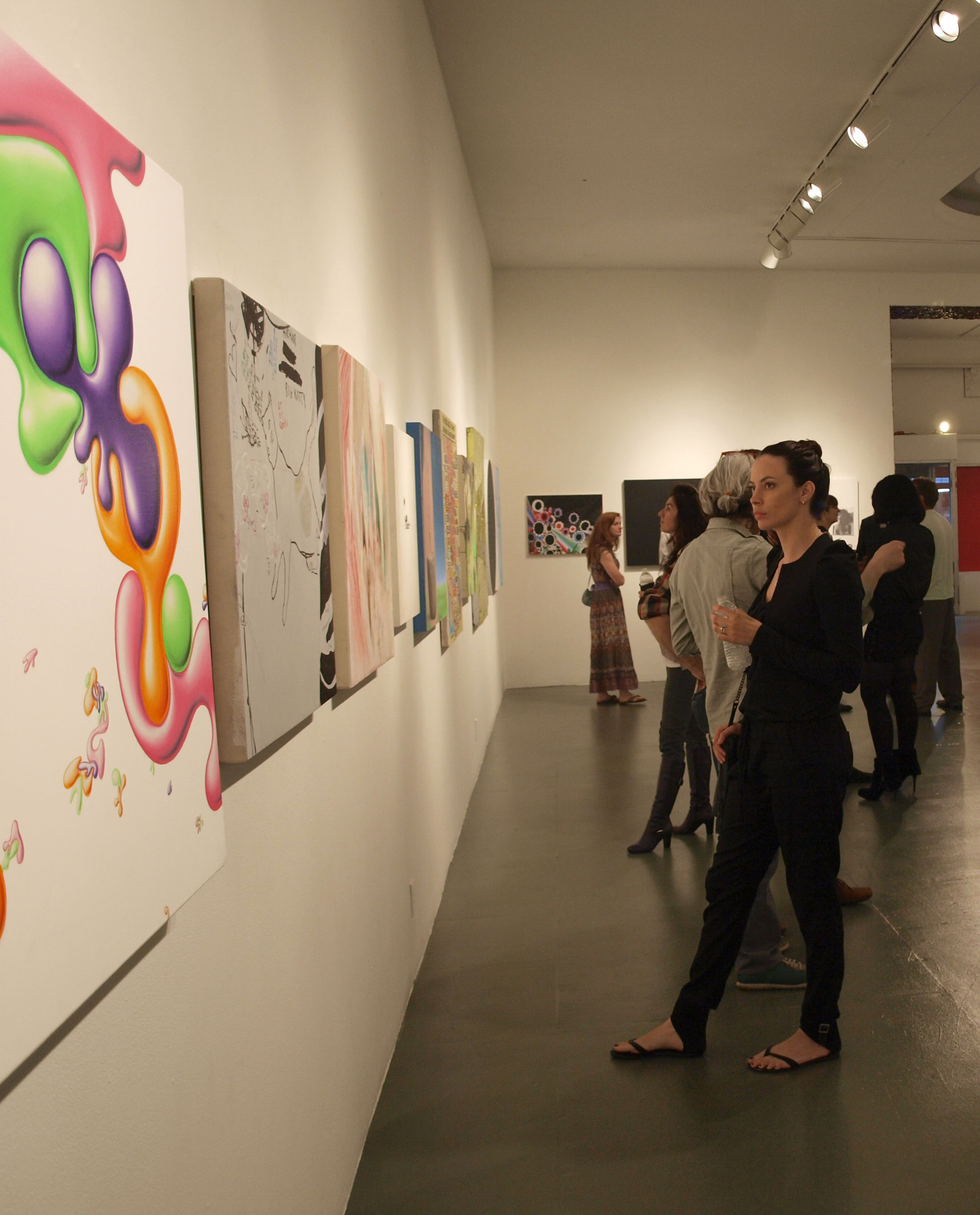 The headlining exhibition for our 2011 summer season, Unfinished Paintings is an exhibition of 38 medium sized paintings by 38 artists, hung alphabetically by the artist’s first name.  This show is meant to dissect and turn contemporary painting inside-out. Works-in-progress will be put on view and offered as a point of entry into each painter’s respective creative world.

Artists and audience members alike will stand in front of the works, wondering why the artist decided it was unfinished, and what would make it finished? The organizing principal of this show is meant to provoke a healthy ambivalence and seed the desire for dialog and feedback. These are critical junctures in the art making experience. Calabrese and Aster now invite the public to engage in this part of the painter’s practice too.

ABOUT THE CURATORS
Kristin Calabrese is a visual artist who lives in Los Angeles.  She works primarily in painting, although she has an addiction to curating, sometimes does performance art, sculpture and photography, and is an eager participant in all sorts of other people’s projects.  She received her BFA from San Francisco Art Institute in 1994 and her MFA from UCLA in 1998.  Calabrese’s painting practice relies on representation as a tool to transform canvasses into living objects that embody focused fragments of Kristin’s life force. Akin to voodoo dolls, she aims to speak through the paintings.  They communicate specific, sometimes transient, thoughts and feelings of the artist. Because of the private nature of the act of painting, Kristin’s paintings have become more invested in both their own object-ness and their relationship to the artist’s body.  This makes up the skeletal structure of the paintings.  The overlying content includes psychology, sociology, and humor and tends to balance on a point of conflict. Calabrese’s solo exhibitions include Brennan & Griffin in New York, Gagosian Gallery in Los Angeles, Leo Koenig in New York, and Michael Janssen in Cologne, Germany. Group exhibitions include two person exhibition “Honeymoon”, at Salt Lake Art Center, Salt Lake City, UT ; “Grey Day”, at Roberts and Tilton, Los Angeles; “Kristin Calabrese, Meg Cranston, and Monique van Genderen”, Brandstrup, Oslo, Norway; and “I am a Camera”, at Saatchi Gallery London.  Calabrese has curated exhibitions for the The Green Gallery in Milwaukee, Honor Fraser Gallery, and others.  Currently on view at LACE is the exhibition “Unfinished Paintings”, that she co-curated with her husband Joshua Aster.  Her new paintings can also be seen currently at her solo exhibition, “Back of My Face”, at Vielmetter Los Angeles Projects.

Joshua Aster is a Los Angeles based artist who received his MFA from UCLA. His paintings are lyrical permutations of the fundamental formal elements of painting:  canvas, composition, color, gesture and texture.  Aster’s paintings are at once playful and systematic as he deftly uses acrylic, ink and water to create layered explorations of what makes a painting a painting.  Aster has been featured in exhibitions throughout the U.S., with solo shows at Carl Berg Gallery in Los Angeles and Salt Lake Art Center in Utah. His work has been included in exhibitions at Roberts & Tilton, Daniel Weinberg Gallery in Los Angeles and Plane Space in New York. Aster is also a member of the artist collective OJO, which has had solo projects at MOCA, Los Angeles and LA>< ART and was recently featured in ANP Quarterly.  Aster and his wife Kristin have co-curated several exhibitons together including Lovable Like Orphan Kitties and Bastard Children at Green Gallery in Milwaukee and Unfinished Paintings at LACE in Los Angeles.

ABOUT THE PANELISTS
Brad Eberhard is a Los Angeles-based artist.  He makes paintings and now and then, collages.  He is represented by Thomas Solomon Gallery, and has recently been in the exhibitions “the Jewel Thief” (curated by Ian Berry and Jessica Stockholder)  at the Tang Teaching Museum and “Seasonal Pictures” at Acme.  After a several year break from the classroom, this year found him teaching painting at UCLA.  Part of his time is spent recording and performing with the band Wounded Lion, whose second LP, titled “IVXLCDM” will be released on In the Red records this Fall.

James Hayward  “Recently a Los Angeles art dealer, whose opinion I respect, told me that my career was the worst managed he had ever seen. I smiled sheepishly, knowing he was correct, but deep in my heart, the inner me was taking a bow. I have blown so many opportunities; said the wrong thing again and again. I love painting, past and present, and revel in the act of wandering though great old museums, discovering the little secrets paintings have withheld for centuries. For me, the late paintings of Titian are the greatest advance in the history of painting. His was not an intellectual or theoretical breakthrough, but rather the unintended consequence of an old man refusing to put down his brushes, just because his trembling hand was no longer capable of the virtuoso control he had commanded in his youth. The history of painting follows this trembling hand, realizing he had transcended and demythified ‘control’, and from then on, ‘mark making’ or ‘marking’ becomes the essence of all great painting. If you doubt my observation, go see “Venus Blindfolding Cupid”, at the Galleria Borghese, in Rome. It was painted when he was 75. It hangs almost directly across the room from “Sacred and Profane Love”, painted when he was just 25, and considered by most art historians, to be the masterpiece of his career. This is who I am and what I believe. Painting is the highest form of craft and the lowest form of intellectual pursuit. In painting, theory is most often the beard of incompetence. Art, being all inclusive and without boundaries, needs a theoretical paradigm in which to locate its practice. Painters have known where the ‘edge’ is for five centuries.  I love painting. See, I just don’t get it.”

Carol Cheh is a writer and curator based in Los Angeles. She is the founder of Another Righteous Transfer!, a blog devoted to documenting LA’s performance art scene. She also writes for ArtInfo, LA Weekly, and Artillery. Her curatorial projects have included You Don’t Bring Me Flowers: An Evening of Re-Performances (PØST, 2010) and Signals: A Video Showcase (Orange County Museum of Art, 2008). She also served as exhibition coordinator for Tubular!, a show of CSU Long Beach MFA candidates curated by Doug Harvey (Pacific Design Center, 2010) and has diverse work experience at a number of museums, including SITE Santa Fe and MOCA. Carol is completing her master’s thesis in art history, which deals with mutated notions of authorship in the work of new media artist Ryan Trecartin.

Lily Simonson is an artist and writer based in Hollywood.  Her erotically-charged paintings of insects and sea creatures explore the intersection of science and art, and have been exhibited around the US and Europe.  Simonson’s art criticism, reporting, and artist-on-artist interviews can be found in her monthly Art21 column, “Looking at Los Angeles.”  In addition, her words and art have been featured by a range of media outlets, including The LA Times, LA Weekly,  Ms. Magazine, and MTV.  She holds an MFA in painting from UCLA and has taught at The Public School/Telic Arts Exchange, the Norton Simon Museum, UC Berkeley, and CSU Pomona. For further information on Lily Simonson visit her site oldgenres.com

Harvey’s curatorial projects have included many traditional gallery exhibitions, including the First (2005) and Third (2007/08) Annual LA Weekly Biennials at Track 16 Gallery in Los Angeles; Don Suggs: One Man Group Show at OTIS (with Meg Linton) and Heart and Torch: Rick Griffin’s Transcendence at Laguna Art Museum (with Greg Escalante both 2007); 2008’s Aspects of Mel’s Hole: Artists Respond to a Paranormal Land Event Occurring in Radiospace at Santa Ana’s Grand Central Art Center and Arataland! A Mid career Survey of Artworks by Michael Arata at Beacon Arts in 2011. In a more experimental vein, he has organized cassette, CD, and online compilations of sound art, programs of found and experimental films, performance events, experimental radio, artist’s comic books and zines, cable access TV shows, an LA solo gallery exhibit determined by raffle, and the self-curating global Chain Letter initiative (2011, with Christian Cummings). He has also been part of the curatorial collective creating the exhibition content and design at the Museum of Jurassic Technology in Culver City, CA. Mr. Harvey also continues to maintain an active art career, exhibiting his visual art (painting-based multimedia) locally and internationally, and participating in international experimental sound, radio, and film communities, as well as regularly teaching in both studio practice and art theory contexts. In late 2008 his diverse oeuvres were the subject of the survey exhibition Untidy: The Worlds of Doug Harvey at LA Valley College. For more information on Doug Harvey visit his website and blog:  dougharvey.la and dougharvey.blogspot.com

Information on each Unfinished artist is available upon request.

RELATED PROGRAMMING
Audio Tour
The artists in Unfinished Paintings will discuss their work in this free audio tour, offering unique insight into the “unfinished” nature of their contribution to the exhibition. Be sure to check out an iPod at the front desk.

SUPPORT
Unfinished Paintings is made possible with the generous support of the Pasadena Art Alliance.