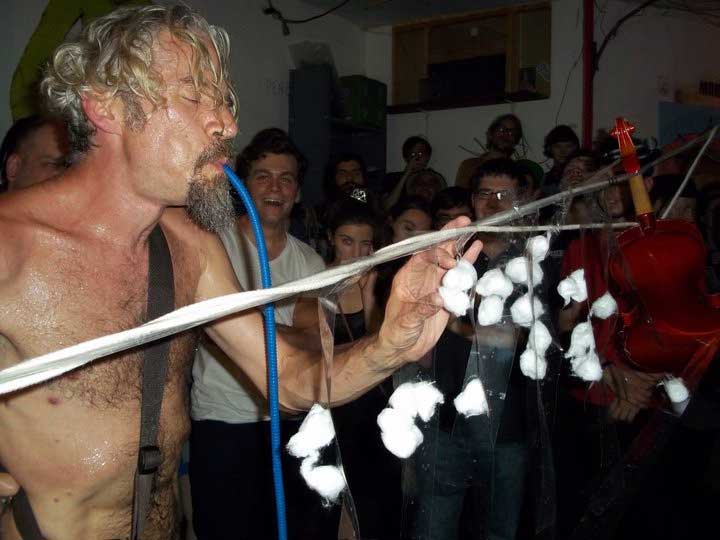 Sound is invisible, but the process of creating it should not be. The advent of electronic instruments has mystified the sound creation process. Electronic musicians often hide behind their equipment, creating a wall between themselves and the audience.

DECOMPOSITIONS attempts to bring materiality back into the sonic equation. Gil Kuno ofunsound.com has curated a selection of sound artists that actively explore the physicality of sound. Gil brings his experience as an audio-visual artist active in both the US and Japanese art scenes to LACE along with a multitude of artists streaming in from various locales.

ABOUT THE ARTISTS
GX Jupitter-Larsen an artist and writer based in Hollywood, California. During the 1990s he was the sound designer for the performances of Mark Pauline’s Survival Research Laboratories. His best known work stems from being the founder and only constant member of the noise act The Haters. The current performance being staged by The Haters is a piece entitled “Loud Luggage / Booming Baggage” in which amplified suitcases burst, crackle, and explode with sound. Underlying much of Jupitter-Larsen’s work is a self-created lexicon consisting mainly of personalized units of measurement such as the polywave, the totimorphous, and the xylowave. The Loud Luggage performance is a sonic reference to the xylowave which GX Jupitter-Larsen defines as the distance between nothing and something. The Haters have performed all over America, and in 15 nations across Europe & Asia. The Haters also appear on over 400 CD & record releases. For more information visit jupitter-larsen.com

Crank Sturgeon has been active in performance, installation, and sound art since 1992. A comical conceptualist, Crank blends pun and the profane into happy, noisy accidents. Accompanied by ridiculous costuming, athletic endurance, and audience participation, the end result is often a recipe that embraces the loud, the wet, and the celebratory. A lso as an indefatigable nomad, Crank frequently tours his show across the USA and Europe; in 2010, performing at the NorCal Noise Festival, in Sacramento, CA; leading/co-curating an amplified badminton team for the SPACE Gallery’s Annual Block Party in Portland, ME; building a life size hobo monoplane for the Festival of the Sacred and Profane on Peaks Island, ME; as well as presenting “Husopathy”, a solo construct/installation at the MEME Gallery in Cambridge, MA. In recent years, Crank has also been a resident at Projektwerkstatt, an experimental artist workspace in Leipzig, Germany; guest artist at CESTA, an intermedia residency in Tabor, Czech Republic; co-collaborator with Fritz Welch at the Drawing Center in NYC; and appearing as a featured artist at countless festivals here and abroad: such as the Olympia Experimental Music Festival in Olympia, WA, Floating Labs in St. Louis, MO, the Denver Noise Festival in Denver, CO, Suoni Per Il Popolo Festival in Montreal, QC, Festival PIEDNU in Le Havre, France, Death Petrol in Antwerp, Belgium, WORM at the RAI, Rotterdam, Netherlands, Wez to Wylasç, Warsaw, Poland, and the Antennae Festival, Paris, France.  For further information visit cranksurgeon.com

Styrofoam Sanchez narrates a post-apocalyptic future where the only logical space for human survival is trash island, or the great garbage patch. Humans are encouraged total residence in a place where their bodies will fuse with Styrofoam creating a new hybrid nervous system which will allow for humans to adapt to new and uncertain living conditions. Styrofoam Sanchez are the new ambassadors for plastic island.For more information visitratskin.org/ss.html

Tiffany Trenda is a video installation performance artist based out of Malibu, CA. She received her BFA from Art Center College of Design and her MFA from UCLA Design and Media Arts. She has exhibited at Robert Berman, Farmani Gallery, Photo San Francisco, Los Angeles Center for Digital Art, Korean Cultural Center, Highways, and Track 16.  In 2009, she created an artist installation for Photo Los Angeles and performed live. Later that year she performed “Entropy” at the Los Angeles County Museum of Art. Trenda won the prize, The Artist of the Year at the London Creative Awards in 2008 and 2009. Recently, she performed at the World Fair, Shanghai, China and exhibited her first film at the A&D Museum in Los Angeles. For further information visit tiffanytrenda.com