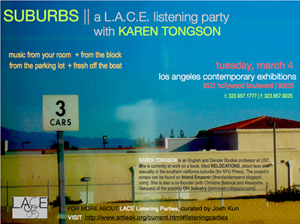 Karen Tongson is an English and Gender Studies  USCprofessor at USC.  She is currently at work on a book title RELOCATIONS about race and sexuality in the southern California suburbs (for NYU Press).  The project’s scraps can be found on Inland Emperor.  She is also a co-founder (with Christine Balance and Alexandra Vazquez) of the popblog Oh! Industry.

Listening Parties are interactive public conversations curated by Josh Kun and are inspired  by the current explosion of mp3 players, podcasts  and other mobile media, that are used to score the  soundtrack of everyday life. Each Party will  feature special guest critics, musicians and curators  who will share favorite recordings – from popular  anthems to found sounds and new material – to serve  as the impetus for this series of wide-ranging discussions  about urban space and music. Party hosts will  design her/his listening experience to shape how  the music is encountered and to break down a traditional  panel format.

Josh Kun (PhD, Ethnic Studies, UC Berkeley) is an Associate Professor in the Annenberg School of Communication and affiliated faculty with the Program in American Studies and Ethnicity. Prior to joining the USC Annenberg school, Josh Kun was Associate Professor of English at the University of California, Riverside. He is the author of Audiotopia: Music, Race, and America (UC Press) which won a 2006 American Book Award. His articles on popular music, the pop cultures of the US-Mexico border, and the music of Los Angeles have appeared in numerous scholarly journals and anthologies. He is director of The Popular Music Project at USC Annenberg’s The Norman Lear Center.