Transactivation: Revealing the Queer Histories in the Archives 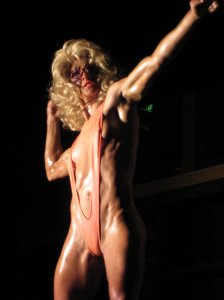 In conjunction with the exhibition Cruising the Archive: Queer Art and Culture in Los Angeles, 1945-1980 at ONE National Gay & Lesbian Archives, artists Heather Cassils, Zackary Drucker, Wu Tsang and Chris Vargas will present a series of live performances and video projects inspired by the collections at ONE Archives. These artists explore trans content in their multidisciplinary work and are interested in a discussion about LGBTQ archives and the “Ts” and “Qs” often missing from historical records. The performance will be followed by a discussion moderated by Dean Spade, assistant professor at the Seattle University School of Law.

Cruising the Archive: Queer Art and Culture in Los Angeles, 1945-1980 is a three-part exhibition that explores the relationship between artistic practices and LGBTQ histories through artworks, objects, and archival documents culled from the collections at ONE National Gay & Lesbian Archives.Cruising the Archive is presented as a part of Pacific Standard Time: Art in L.A. 1945-1980.

More information on Cruising the Archive can be found at cruisingthearchive.org.

Heather Cassils is a body builder who uses her exaggerated physique to intervene in various contexts in order to interrogate systems of power, control and gender. Often employing many of the same strategies used by Fluxus and guerrilla theatre, her method is multidisciplinary and crosses a spectrum of performance, film, video and photography. She is also a founding member of the Los Angeles–based performance group Toxic Titties.

Wu Tsang is a Los Angeles–based visual artist and performer whose projects have been presented at X-Initative (New York), Sala de Arte Público Siqueiros (Mexico City), Oberhausen (Germany), REDCAT (Los Angeles) and the California Biennial 2010. In 2008, his short film The Shape of a Right Statement was included in Artforum’s “Best of the Year (Film).” Tsang is currently directing his first feature documentary, Wildness, which is in post-production.

Chris Vargas is a video maker based in Oakland. With collaborator Greg Youmans he creates the sitcom series Falling in Love . . . with Chris and Greg, and with Eric Stanley he is the co-director of the movie Homotopia and the feature-length sequel Criminal Queers.

Dean Spade is an assistant professor at the Seattle University School of Law, teaching law and social movements, poverty law and administrative law. His book, Normal Life: Administrative Violence, Critical Trans Politics and the Limits of Law, is forthcoming from South End Press.

Organized by Onya Hogan-Finlay, David Frantz and Mia Locks as a part of Cruising the Archive: Queer Art and Culture in Los Angeles, 1945-1980 at ONE National Gay & Lesbian Archives. More at onearchives.org.